Archive for the tag “clacton”

Stavanger is a place in Norway. I say this because the reactions when I announced my trip were “where is that place”. Taking a quick look at what I was told I might find there seemed to educate me to expect a place with eternal 24 hour rain each day, where the highlight of the town was the National Petroleum Museum and a place that was centric to oil production. This opinion was further influenced when on the outbound British Airways flight from London, being generous the plane was perhaps 20% populated, a small Airbus 319, suggesting that an 8.30 am flight to Stavanger was not a mecca for travellers, and in the only row on the whole plane with three customers, they all sat talking, loudly, about the exciting topic of winches and other seemingly oil rig decorations through the flight.

Landing at Stavanger airport is also not designed to induce idyllic thoughts. The airport is small, clean and functional, but passengers are greeted with a huge mural photograph seemingly showing a man about to jump off a very high cliff, and this is closely followed by a large SAS advert (the airline, not the military organisation) inviting people to “get lost”. My own personal experience was then not further improved by a 45 minute wait for a taxi driver to appear.

Leaving the airport one might think that the whole of the Stavanger road transportation system was being replaced. Wherever one looked there was digging and building, though with little sign of the workers. Aliens arriving in Stavanger would certainly have rapidly reversed their spaceships and headed off to more succulent climes such as Birmingham or Croydon, or even Clacton-on-Sea.

So a fair summary as I approached Stavanger city centre, was that I had low expectations that had actually been exceeded by this seeming awfulness. How wrong could I be? It took around an hour to fall in love with Stavanger. The Radisson Blu Atlantic Hotel sits on a central small lake and from the 11th floor the views are impressive, of the lake, of the city buildings and the distant mountains. Walking around the lake is a nice start taking maybe 20-30 minutes and counting around 1500 steps on my Fitbit. There were nesting birds, and in fact a huge egg in a nest, which I presume belonged to the scary swan nearby, were really cute sights. Plenty of various seabirds in attendance including the greedy seagulls who seemed to own the benches for themselves and certainly used them as their own personal toilets. The only surprising thing was maybe the number of beggars sitting on their blankets around the lake, and even more so the fact that the lady here had expensive looking streaks of colour in her hair.

The walk down into the town, described as the “old town”, although not looking that old to me, was a nice walk, where cars were either prohibited or certainly discouraged. The walk takes one along the harbour or we should call it port, as a huge cruise liner from Holland America called                       “ Rotterdam” ( could their name have been a little more inspiring?) sat right next to the quayside to the extent that passengers could have hopped off any lower tier balconies. In 2011 Stavanger hosted 130 cruise ships.  The quayside is lined by bars and restaurants all with nice looking menus that ranged from Reindeer to Burgers with a lot in-between. A few museums poked their heads out as did any number of coffee and snack shops no doubt designed to deal with the cruise liner passenger’s appetite. The whole atmosphere was relaxed and happy. Bars promised live music in the evening and the beer was flowing it seemed all day.

There was not 24 hour daylight as was suggested but maybe 20 hours certainly. The photographs show how the lake looked in the afternoon and also at 4.30 am.

A few facts about Stavanger. it is the fourth largest city in Norway with a population of around 150,000. Unemployment rates are low and lower than many other european countries at around only 2%.

So will I return to Stavanger? Certainly. A great option for a weekend break.

Welcome to Stavanger. Jump off a cliff? 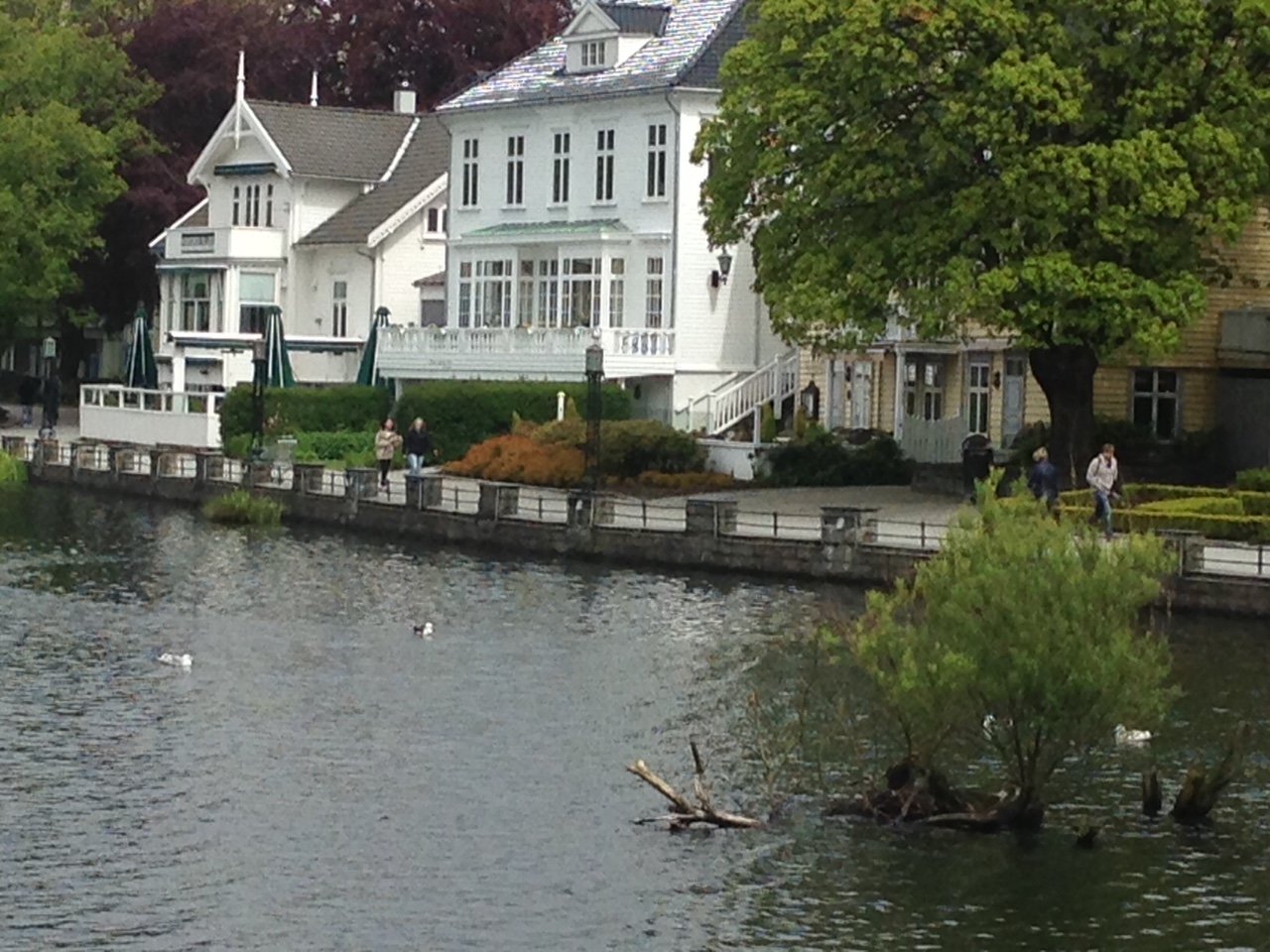 Swan egg by the lake 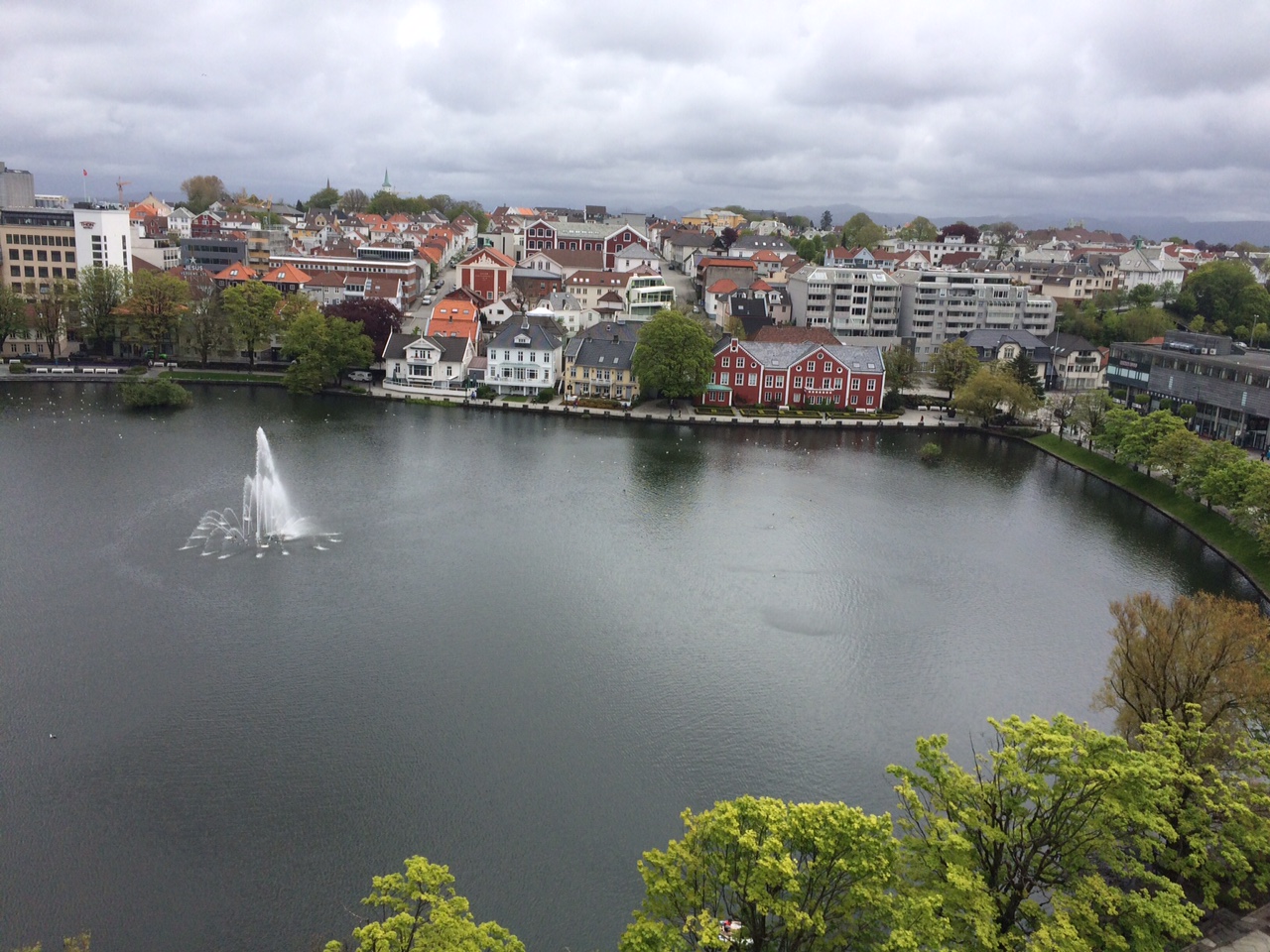 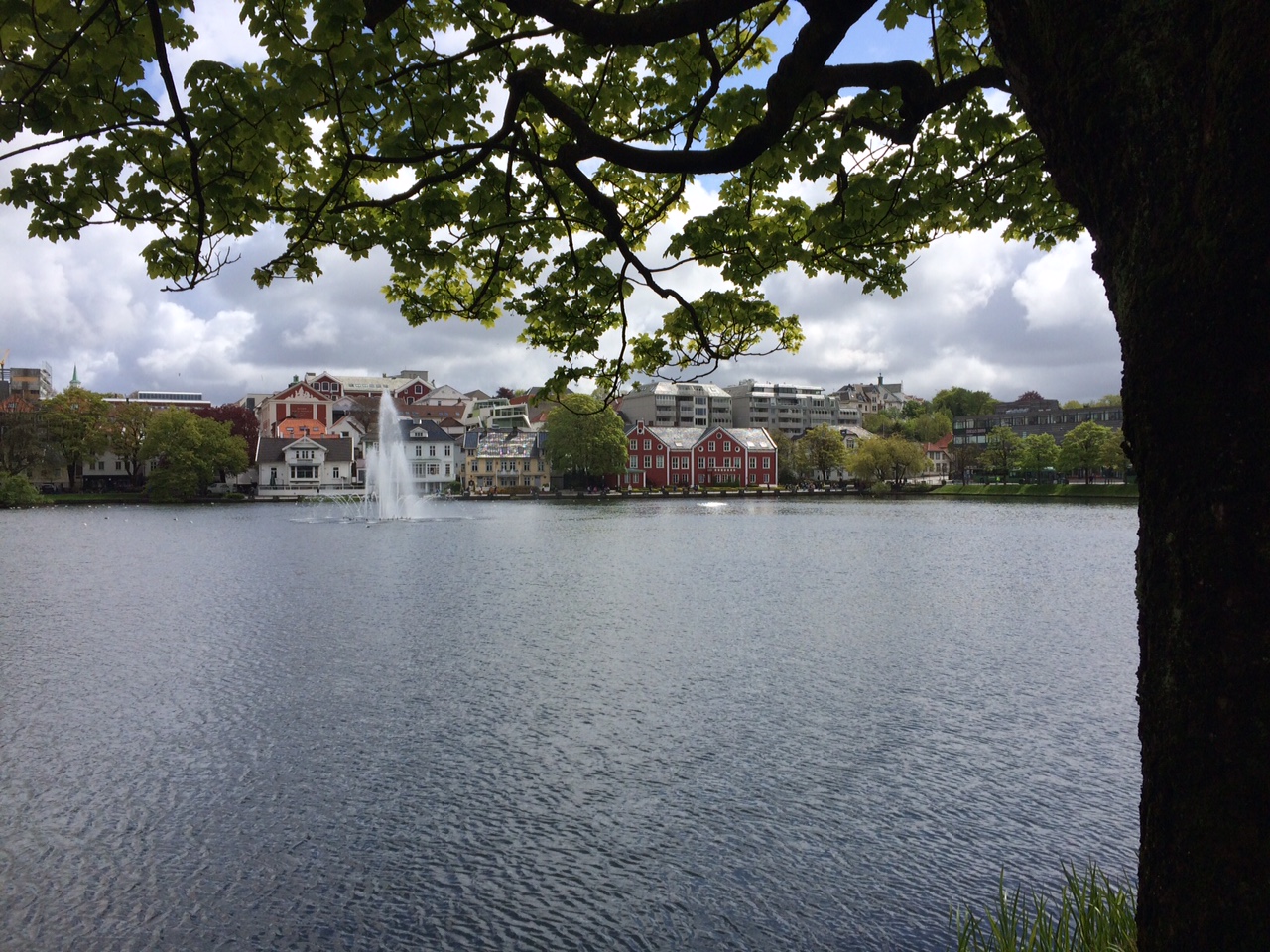 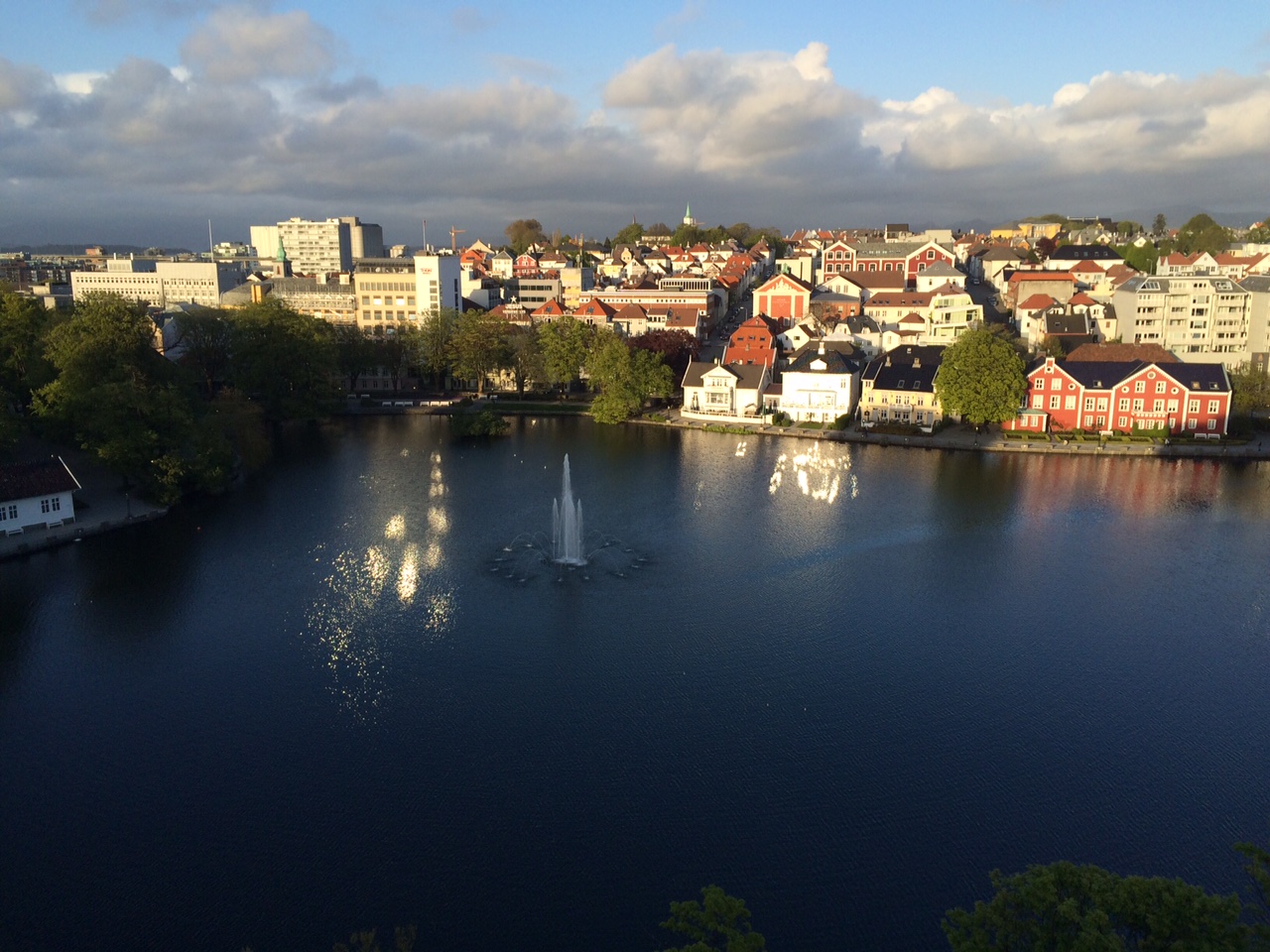 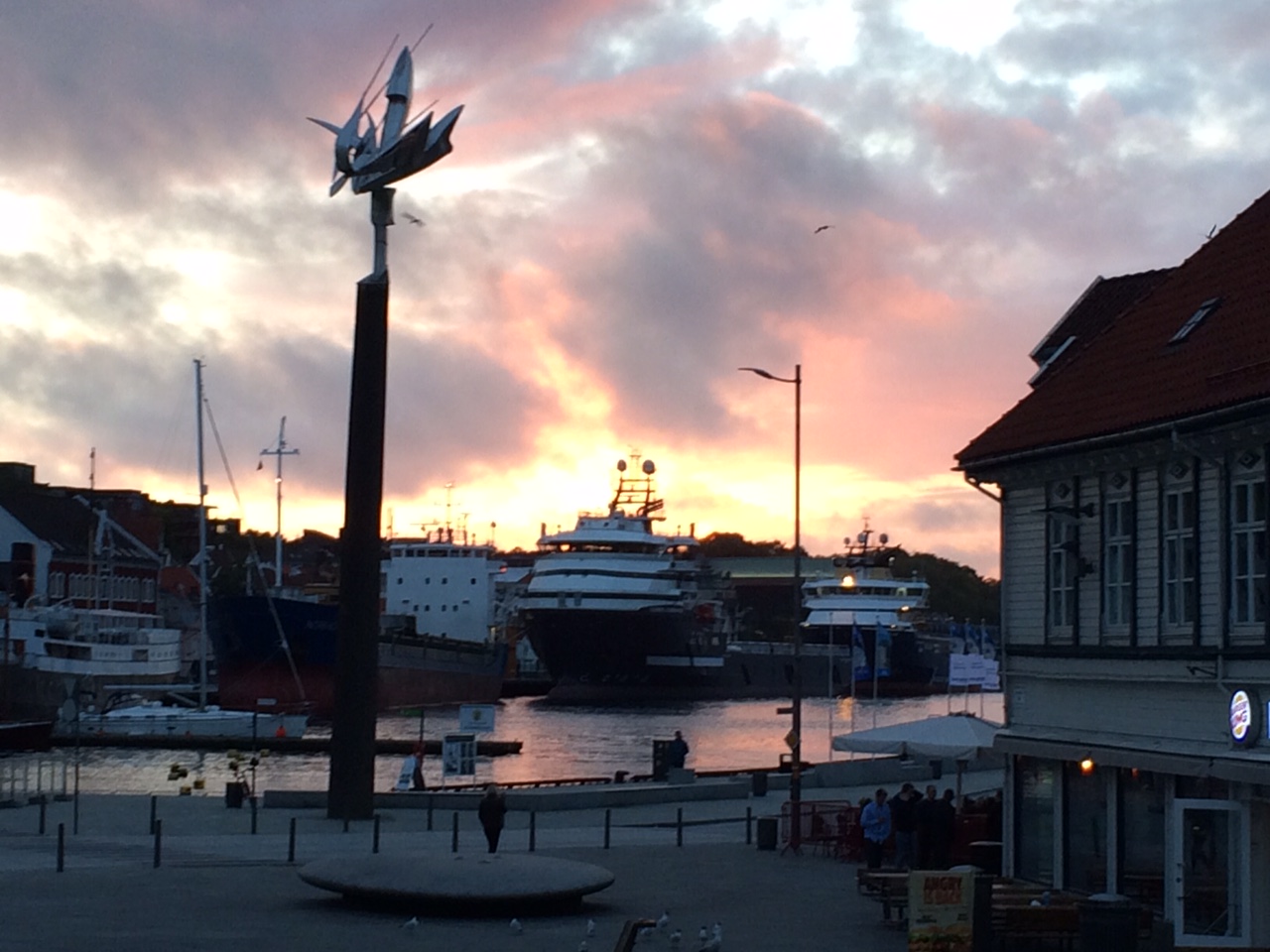 Curious fish dish for breakfast. not my breakfast though 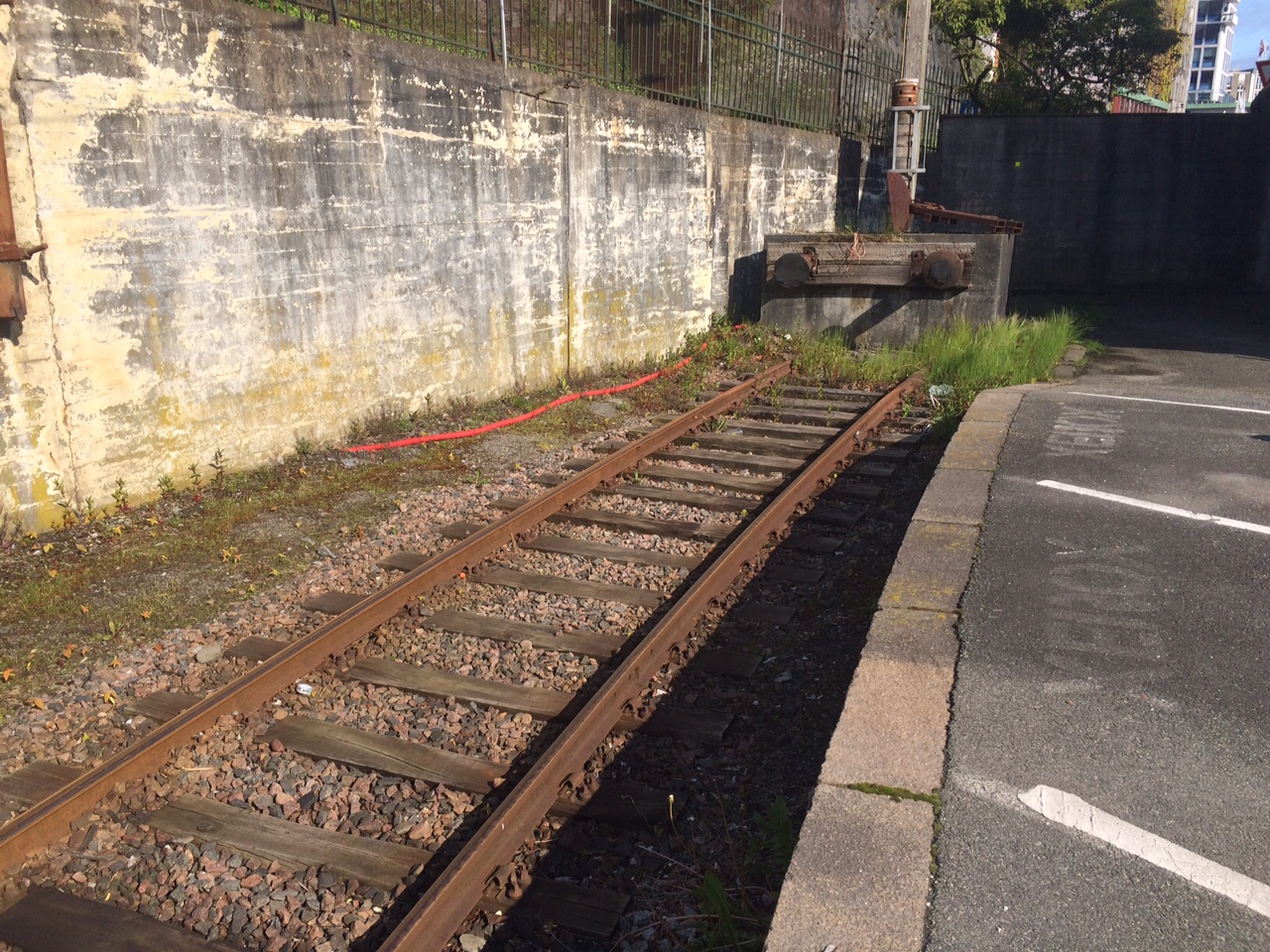 Stavanger Railway Station. The end of the line it seems 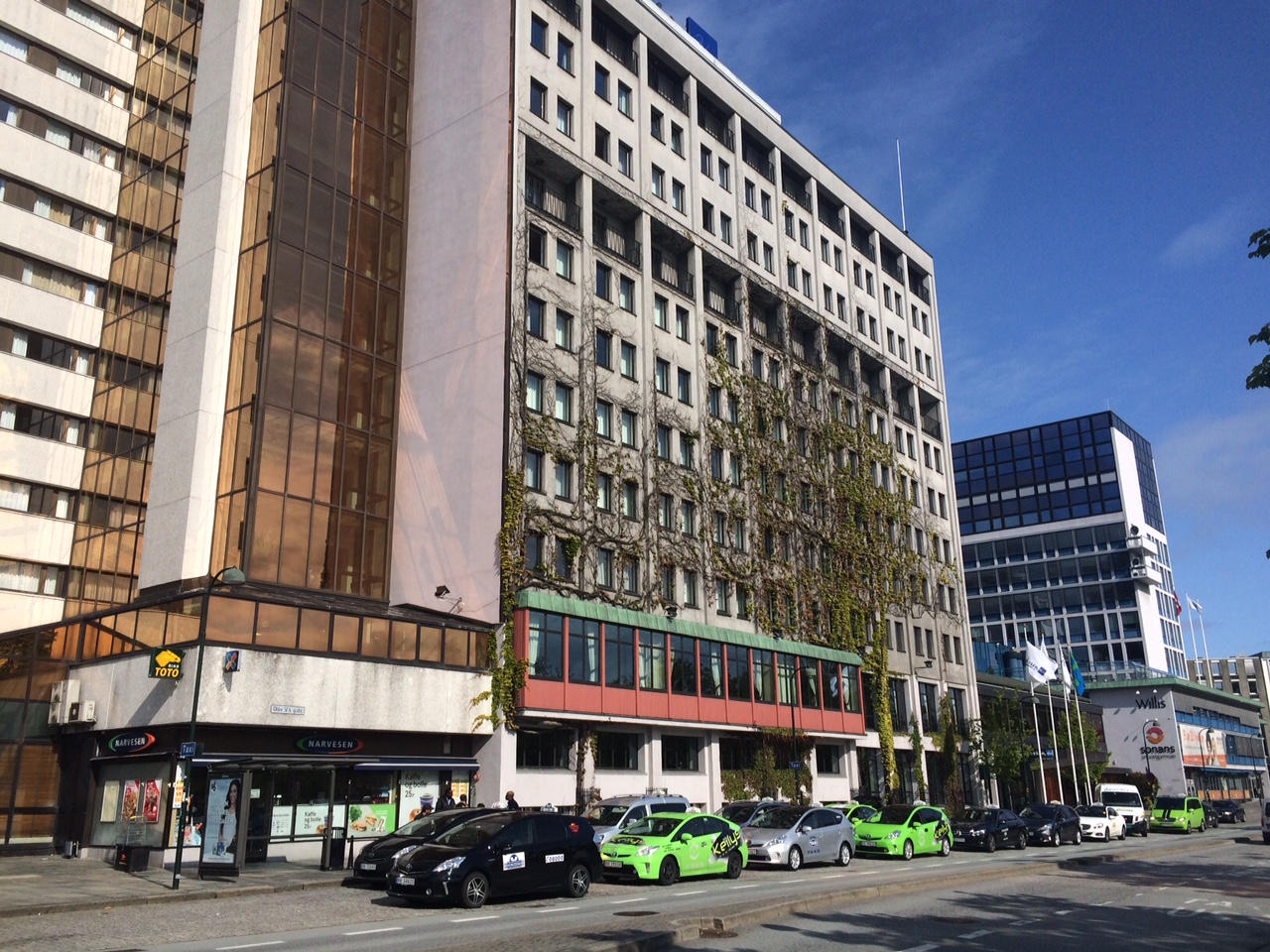 Many taxis like a start of the Grand Prix 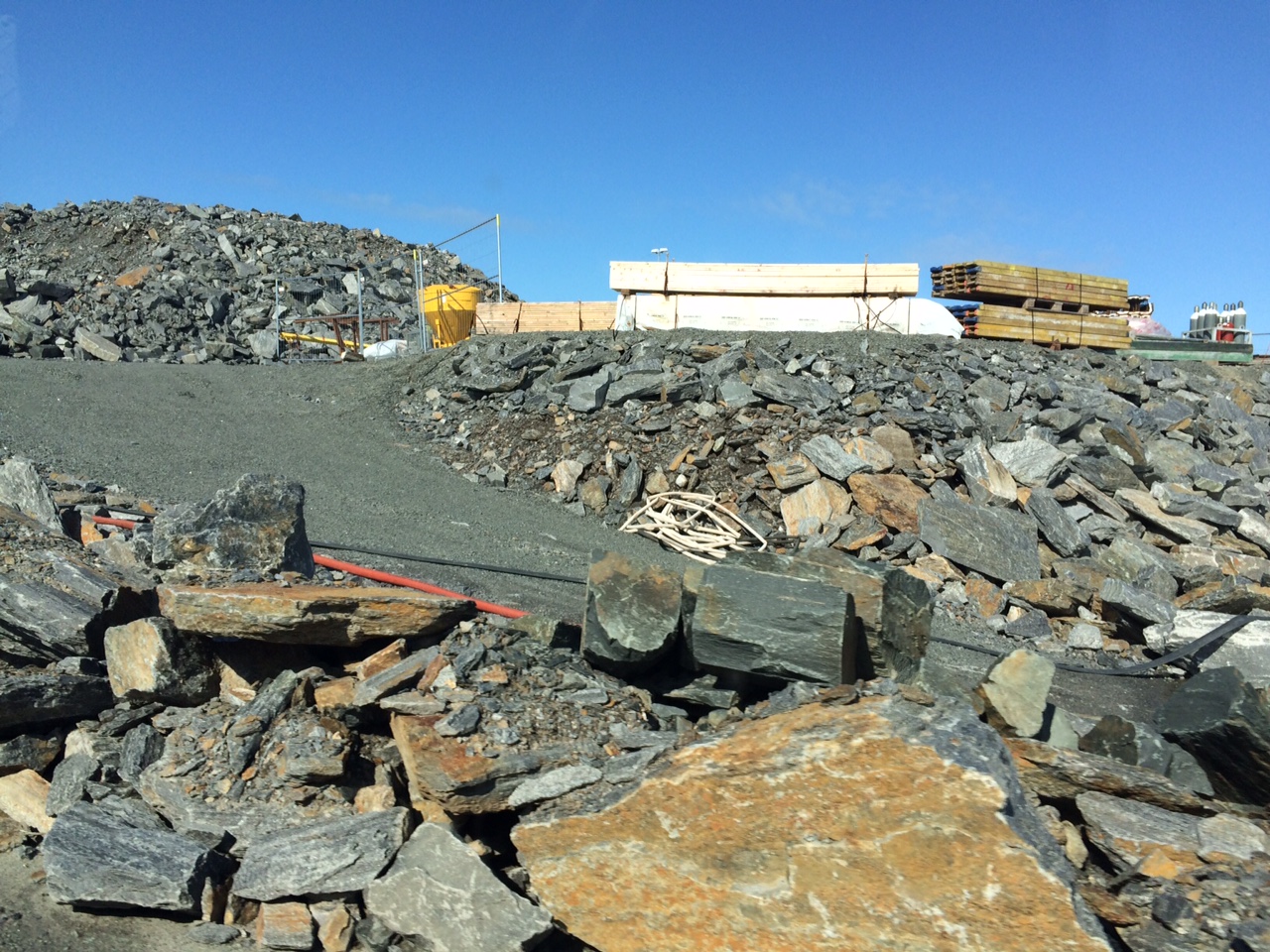 On way from Airport. The view

Clacton is a place I visit once a year. Around 120 miles from 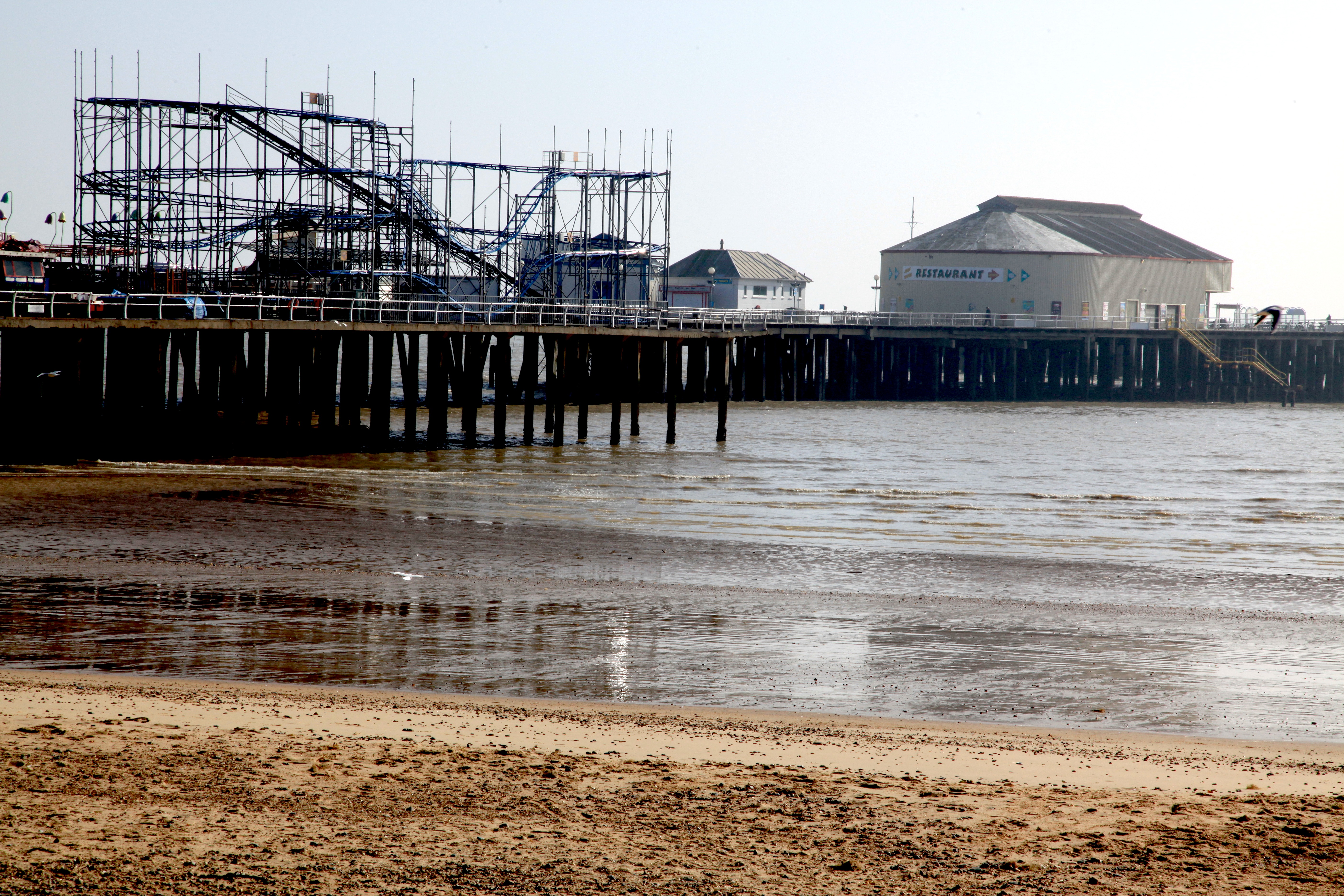 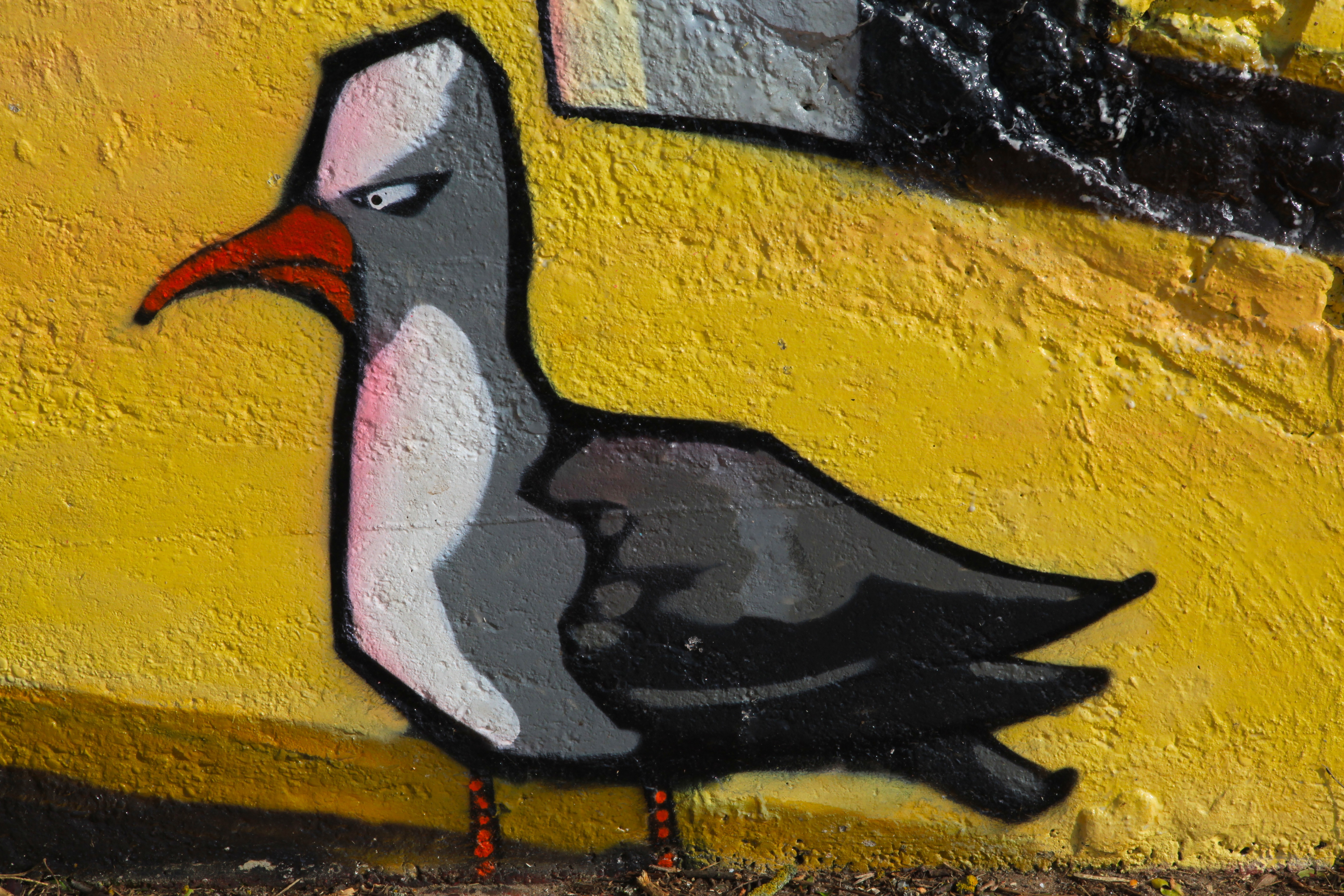 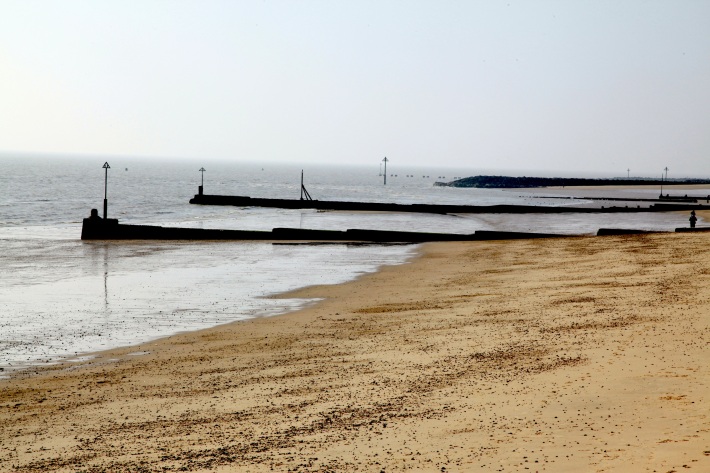 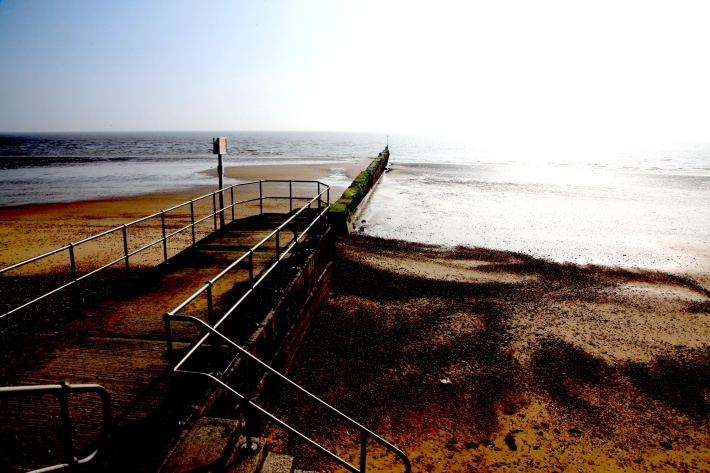 If Iam lucky the sun shines, there is no rain and the few hours I am there I can spend walking the promenade and eating chips on the pier. Today I had maybe more than a few hours and the cracks are starting to show in this quintessential seaside town. Firstly there are few people around, secondly those people had a median age of maybe 70 years and lastly places are starting to close down. Gone is the Comfort hotel. Closed was the restaurant at the end of the pier ( it will open but last year was open this time). The wooden pier looked not only ramshackle but in parts unsafe. Some of the cracks between the wooden planks were maybe a touch too large, and should the planks have moved as much as they did?

For 5£ Sausages and chips were mine, although the interpretation of the server as to what constiuted a ” little milk” in my tea did not match my own view. The day was cold, sunny and hazy. The wind farms could not be seen out at sea. The shops all looked a little jaded. I enjoyed my day but would I go back in the summer? Probably not.

A few things did stand out though. The Graffiti was good!

I cannot recall ever have gone here before other than a brief trip 5 years ago but today this was my work trip. Driving into Clacton it strikes you immediately that this is an old persons town. The WestCliff theatre, that sits nowhere near either the west nor a cliff advertises bands such as Hermans Hermits ( whom I thought actually were all dead), and the average age of the street folks is in the 70’s. But it has a nice feel to it. Perhaps surprising is the number of school age children around on a schoolday. Either in the amusement arcades with parents I should add or on the beach. Why are they not at school? Social workers would have a field day here.  The morning weather was not too bad, sunny and cloudy each in turn but in the afternoon the rain just came down. Lunch was taken in a cafe at the end of the pier, which seemed almost a replica of Bourenemouth pier. Very nice sausage and chips, cheap too. The sea was rough but not terribly so, the beach was kind of inviting.

I came away thinking that I could happily cope with a summer day here on the beach and the pier, the cost of buying a wristband for unlimited rides on the pier a mere £14.  I think i like Clacton On Sea. I would really like to get closer to the windfarms, they fascinate me. 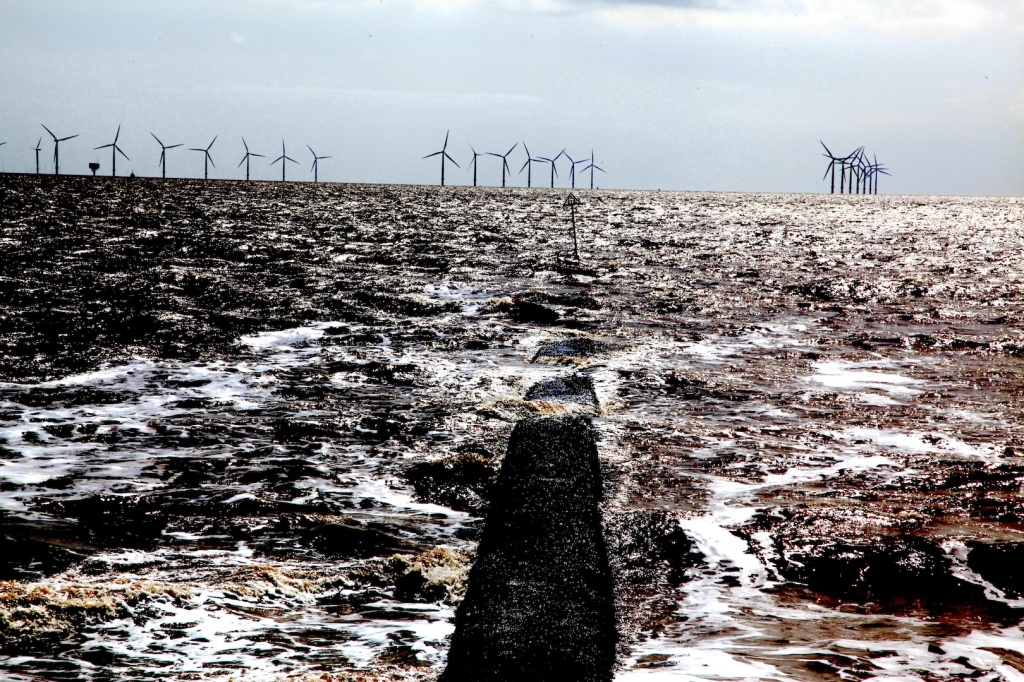 I have called this photo the Black Sea 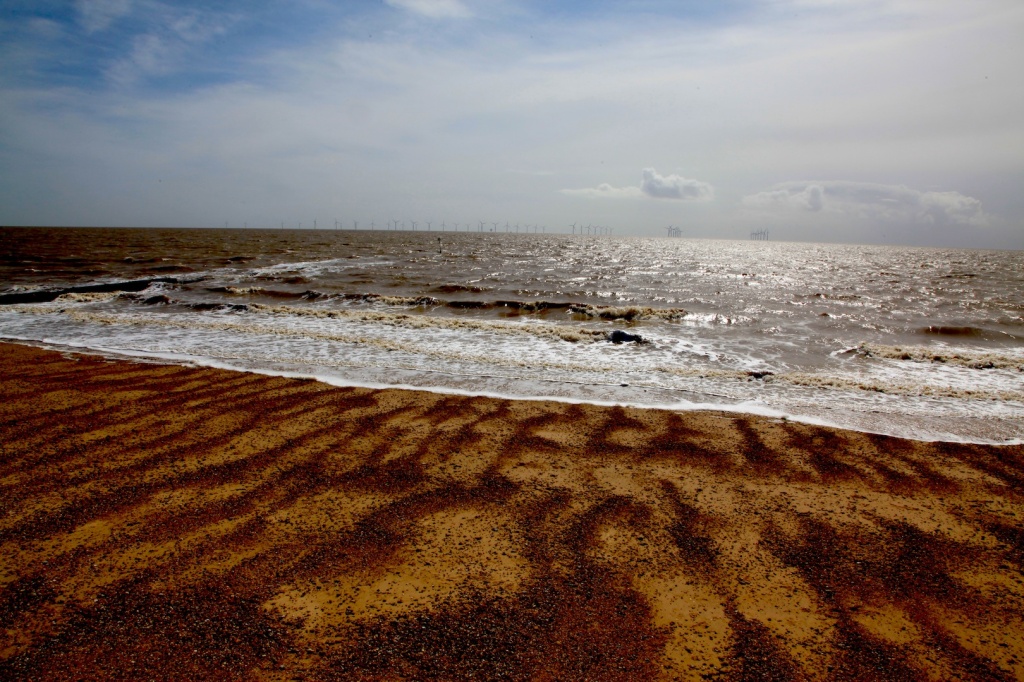 And why not at school?