Archive for the tag “terrace”

Football fans are basically and usually inherent kind souls who although ranting away on a saturday with murderous chants, often then reflect, and certainly turn up the following saturday.  At Brentford there has been much discussion about what our expectations are this season, what our budget is and hence what should the manager be doing to achieve this. My own humble view ( n=1), is that Uwe Rosler is not the man. I have become disenchanted gradually over the last year. Nothing specific. no one thing. Others do not agree, some vehemently disagree. Anyway I pulled together a few thoughts this afternoon and posted them on Beesotted ( the most excellent and balanced of fanzines/websites). Here I repeat them with a poll. I genuinely want to know am I wrong?

My own views differ. It is not about Stevenage nor 3 defeats. It is about the poor management at the end of last season  and the continuing poor management this season. Combined with some abysmal signings. Let us recall we have scored 4 home goals the lowest in the league. We have even scored 3 of them in one game against arguably the worst side in our league. We have conceded 13 away goals almost the worst. This persistent poor form is down to Rosler not down to injuries nor bad luck. It is clear where our deficiencies are . Goalkeeper. Central defence. Defence generally. A roulette wheel approach to team selection. Our best players were on the bench last week.
This is not a panic opinion but a considered one that also notes Roslers refusal to explain to the fans any of his more bizarre selections. We cannot waste any more time nor money . Finally I am not enjoying this brand of football this season.

Reflections on Non-League football and social Media opportunities. Missed by Tooting FC . From a Non-League photographers perspective. Facebook and Twitter for non-league clubs.

In a life of a football fan and especially a non-league photographer a day of hideous weather such as yesterday, is not wanted. Most games were called off and the challenge was to find a game that was actually on. For me this would have represented a challenge to the management of a club that wanted to boost their attendance by getting the word out there that the game is on, or even off. Some clubs did this very well. Respect due to Sutton who even replied to my humble tweet to them about if the game was on. A club that did badly on all counts was Tooting and Mitcham FC. I could find no social media nor internet site to answer my question. The websites attributed to Tooting seem to have been last updated months if not years ago. No Twitter account. No Facebook page. I might add that all these media are freely available and indeed free. Many other clubs did well to update their fans. Lets throw some praise around. Walton and Hersham have both twitter and facebook and their fans knew the night before that the game was off. Horsham regularly tweet game updates during the game.

I belong to a closed group on Facebook related to non-league photography and from the multiple postings there it was clear that our little coterie could have been driven to any game probably on, hence boosting attendances by a few, but multiply this up and clubs could have done themesleves a real favour.

Having guessed correctly that the game might be on I arrived 2.20pm at Tooting to find no information available. Was the game on or off? Turnstiles all locked. No signs. No clues. No programmes. A few stewards appeared, mostly young lads, doing a grand job I must say, of about 13-14 years, who appreciated the issue and went away to solve the problem. Turnstiles duly opened at 2.40pm. A thin paper based programme was on sale from a cheery gentleman for 2£. In all honesty the poorest non-league programme I have seen for some years. I do not exaggerate but I could have printed this off from my computer in far better format. Little to no food was available in the snack bar. A wait for 10 minutes led to a burger. Priced at the not so cheap price of 3.50£. Entrance to the ground was 10£.

The pitch was not in bad condition at all considering the rain .

I will stop my social media rant here, but what opportunities are being missed by clubs who want to boost their crowds. Each week we read that non-league football needs larger crowds but clubs must promote themselves a little better to get new fans. Tooting missed this opportunity big time yesterday. 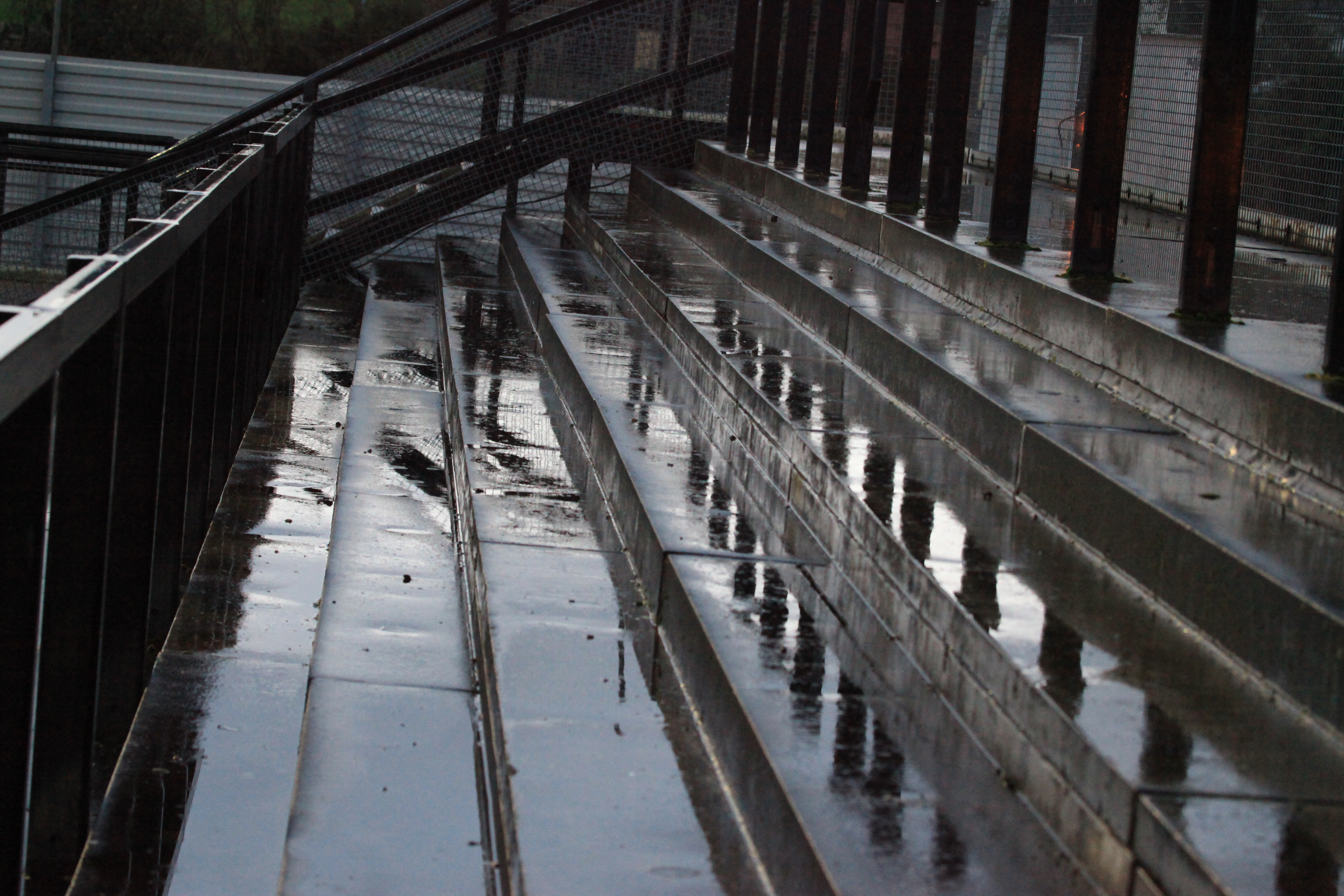 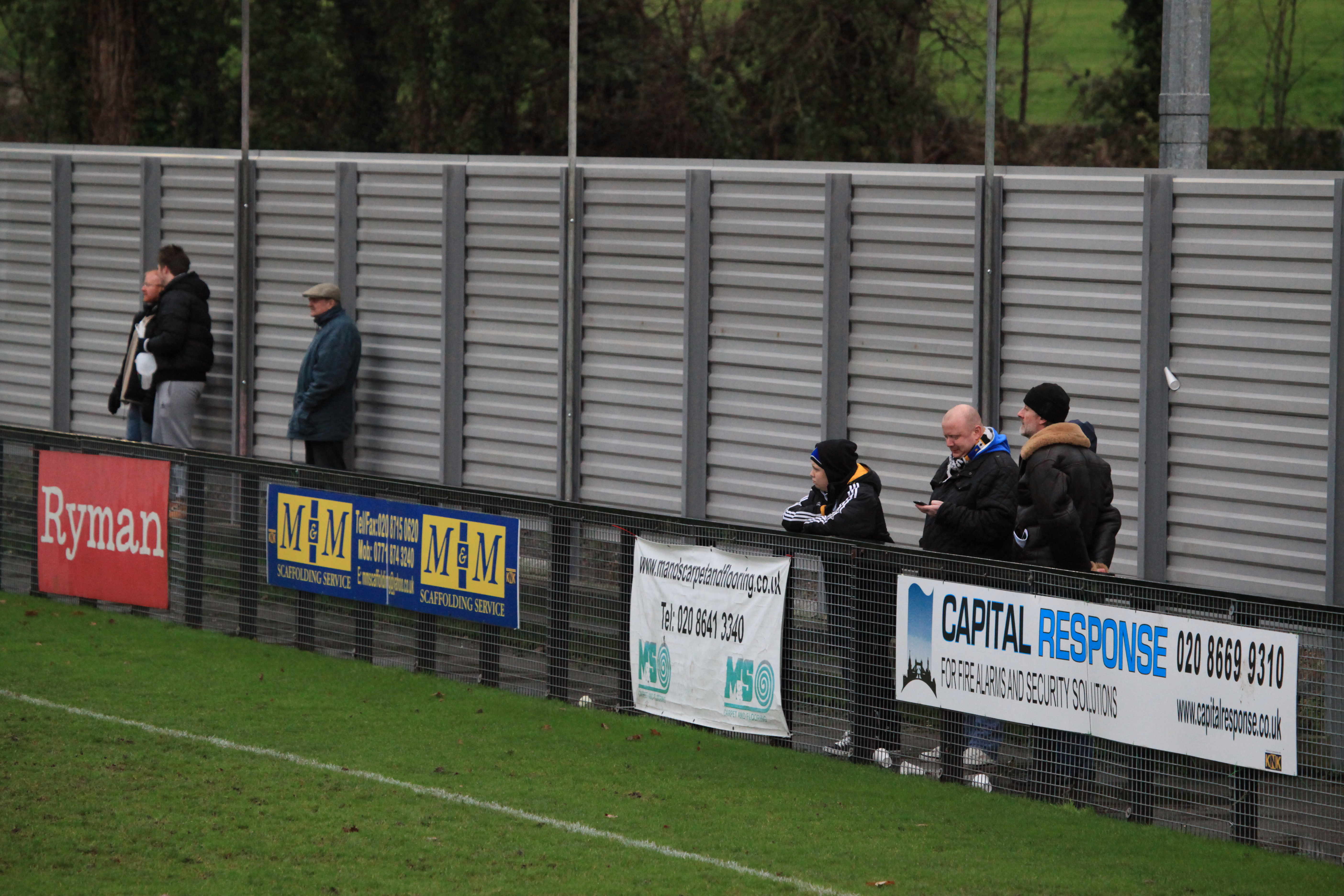