Archive for the tag “homework”

Our garden is an eco-system, well thats the opinion of the teacher at our daughter’s school and in fact applies to all the form who have a garden. Thinking about it we have foxes, bees, hedgehogs and numerous other invaders and visitors.  Compost is  made and goes on the soil, an oak tree grown from an acorn from Wisley Gardens, apple tree and so on. Anyway whilst photographing this melee of activity today ( whose homework is it?) I met some large and curious spiders. The garden spider is alive and well in New Malden. What however is interesting and there may be a simple reason, is why hardly any of these exist at  Wisley RHS gardens? any clues?

Since when did 12 year olds design Renaissance Churches for their homework?

I am living it seems in a parallel universe and clearly was away the day, week or month, they taught us how to design a Renaissance church. This is a weekend homework item. Two versions scanned in, neither played with, the first greyscale and the second monochrome.  I remain impressed……..

The Best Alien Bookmark in the world

There is little doubt that the Twelve Year Old has better English grammar and literary ability than myself. So no discussion needed there. But occasionally she writes a piece that to me seems amazing. But as father to theTwelve Year Old, I have a degree of bias.

So tell me what you all think and please share this blog widely, all opinions invited please!

(As Felix leaves the little cottage dogs are barking in the distance. He looks back at the cottage, but seeing that there is no one there he carries on walking away from it towards the smoke in the distance)

Felix is humming a folk tune to the sound of his boots moving through the undergrowth.

Felix:  I wonder what sort of food will be left in town at this hour! Not much, I think!

He laughs and picks an apple from a passing tree. He stops to look round at the faint outline of the cottage.

Felix:  Should I give this to Agathe? By the time I get back she will be hungry…. No. She’ll be fine. I’ve just got to stop thinking the worst about leaving her. But this is apple is a beauty! I’ve never seen one so red!!

He briefly shines it on the corner of his patched tunic before putting it in a pocket and continuing on his way.

(The scene changes as Felix enters the outskirts of the town. It is deserted with market stalls abandoned, with their produce still on show. There is smoke coming from several burnt out houses.)

Felix:  What has happened here? No one is about, and that’s unusual- especially as it’s market day… Where is everyone? HELLO? IS ANYONE THERE?

A man with long ginger hair and a beard opens a door of one of the nearby houses. He cautiously looks round the square before beckoning Felix over with a gnarled hand.

Seller:  You haven’t been in this town for the past few days, have you?

Felix:  No. What’s happened? And where can I find supplies? I live in the woods, you see.

Seller: So you didn’t even hear the dogs? Surely even in the forest their barking can be heard…

Felix: Yes, we heard them all right, and we kept away from the town for a few days but we can’t keep away forever. We need supplies badly, and we don’t have anything to sell. Is there anyone here who would be willing to sell me some supplies?

Seller:  It’s not possible. Not after what happened yesterday and early this morning….

He looks curious and the old man sighs before openimg the door and ushering him in. Inside there is a fireplace with a fire crackling inside. A simple oak wood table with four chairs stands to the right of the room. An old lady fast asleep is in a rocking chair beside the fire. The old man leads him to another room where two threadbare armchairs are placed. He sits down in one of them before beckoning Felix to sit down.

Seller:  Before I begin, does time play on your hands? This tale may take a short while.

Felix: I have time enough.

Seller: Very well. Early yesterday morning, news reached us that a terrible being was loose somewhere between here and the neighbouring towns. But the messenger who brought the news described him as a monster, with pallid yellow skin and black flowing hair. We laughed and said no such being could exist. My daughter and myself were part of the crowd. Then later that night the being entered our town. The dogs were barking and the guards tried to stop it but it just killed them and carried on without stopping.

He stops to wipe away a pale silver glistening tear out of the corner of his eye with an aged hand before looking up.

Felix: And then? What did it do?

Seller: It made fire. Fire that burned and stroked the walls of every house. Fire that murdered innocent beings that were caught in its wake… My daughter was one of those people. Both she and her husband were burned alive inside their house. By now this creature from hell had disappeared into the night and that was the last we saw of him. But then the following morning he came again and wrecked all the market stalls- eating all our supplies and produce. We chased him with our men on horseback with their hunting dogs, but he escaped into the forest.

Felix stiffens at the mention of the word forest before getting up but the old man stops him and shuffles out the room, only to return seconds later with a basket which he thrusts at Felix.

Felix:  I must go. My wife is in the forest with but little or no protection at all. She would not stand a chance against this, this inhuman being.

Seller:  Wait! It may be too dangerous to return here for some while. Take these two loaves of bread, this half round of cheese, some flour and salt. Is there anything else you need?

Felix:  Such unimaginable kindness….. If it wouldn’t be too much trouble, might you have some soap and some powder and lead? Some honey would be good too….

Seller: Of course. I’ll get those for you.

He shuffles out for the second time before returning with the other items. He places them inside the basket before ushering him out the front door.

Seller:  Go carefully, now won’t you. This town needs more young lads like you- ready to defend his loved ones.

Felix races out of the town and into the forest. He sees a trail of huge footprints along the track to his house.

He runs even faster, the brambles along the well-worn track catching at his clothes, tearing gaping holes in them. As the house appears in sight, he hears a deep grating sound, that sounds like something from hell would utter. He hears her apologise before more grunting follows. He takes this as a bad sign.

He bursts into the house, flinging the front door nearly off its hinges as he races inside….. 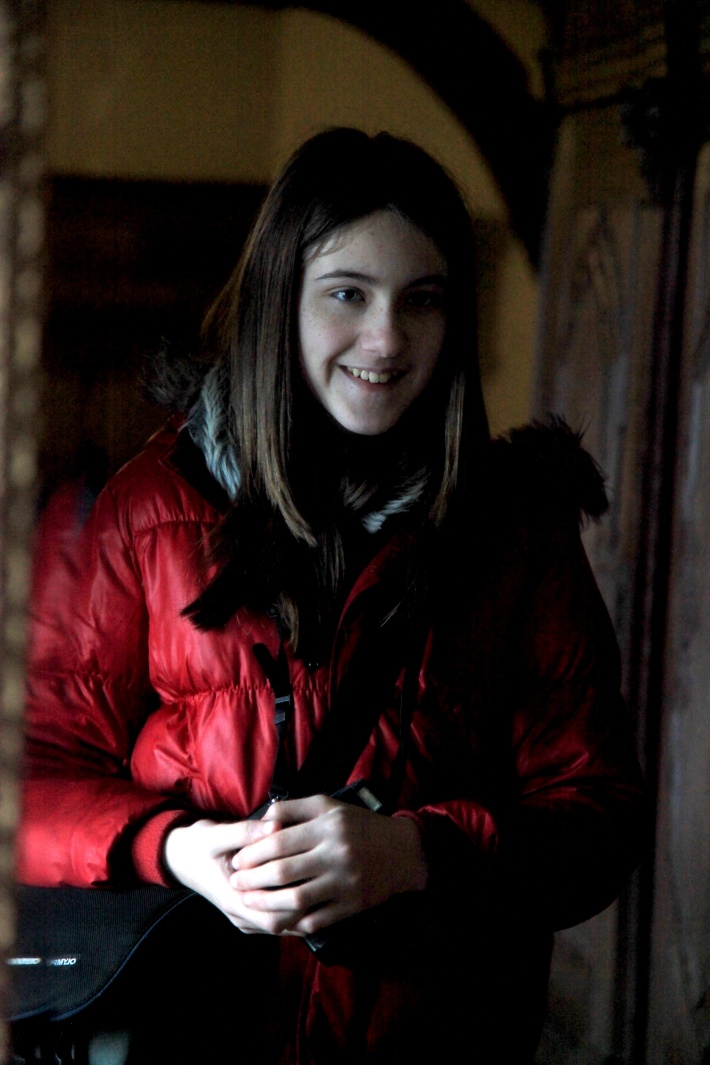