One of the advantages of having a daughter  in the Cayman Islands diving is that I get to see some amazing photos. This one was taken yesterday on the beach in Grand Cayman and the story goes that this eel was spotted in the sea and  someone dragged it out. It chose a bad meal choice and I have done that before, but this beats even a Brentford burger….her blog is http://www.seniorbushe.wordpress.com

Those clever at this hour will notice the similarity in our blog titles………there is a story. She was called SeniorBushe by friends of her younger brother………..so hence her blog title………..I just added a little bit on as her father………… 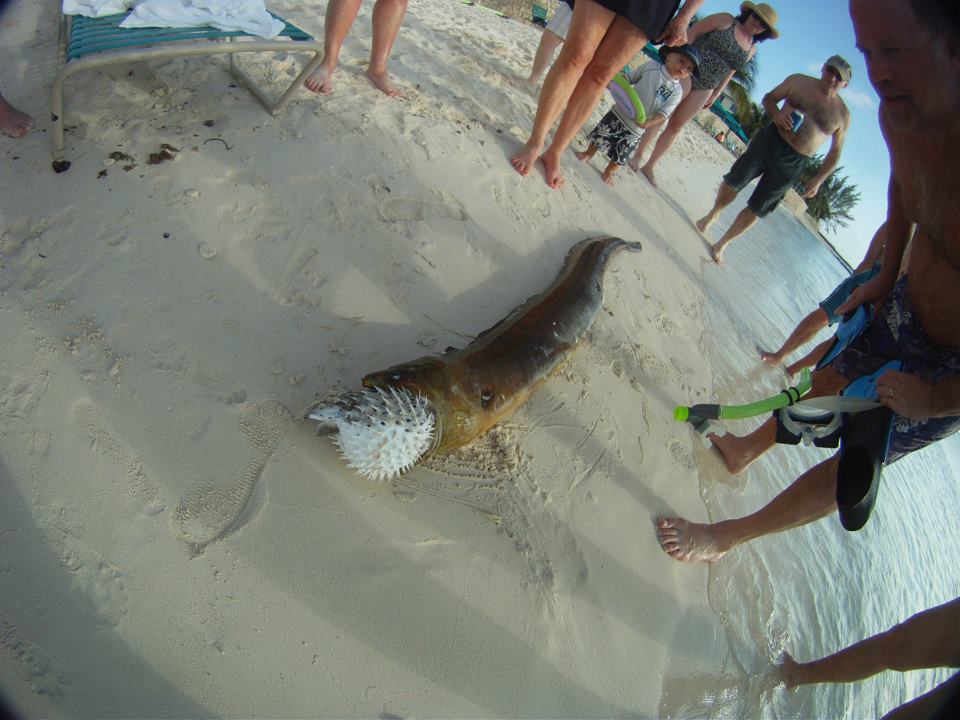 The Cayman Islands have to be one of the most beautiful places in the world. Seven mile beach is just that. The downside is the cost. As I understand how things work here, no tax is paid so the government claim their money on all items sold. Hence a litany of taxes and charges are added to each and every bill. An hour in the Kirk supermarket, a lovely clean supermarket that I wish we had in UK, is sadly enough to depress one when looking at the cost of food items. Think of a UK price and then increase it between 2-4 fold.

The Island itself is full of lovely coves and beaches and snorkelling reveals hundreds of fish and other underwater paraphernalia. The hateful sea urchins live surprisingly close to the shore, maybe less than 10 yards in places. Even 20 yards from shore there are moray eel…

Going to weddings is not my usual form of entertainment but when they take place publicly on the beach when on holiday then maybe its ok to have a peek. This is how you do it: 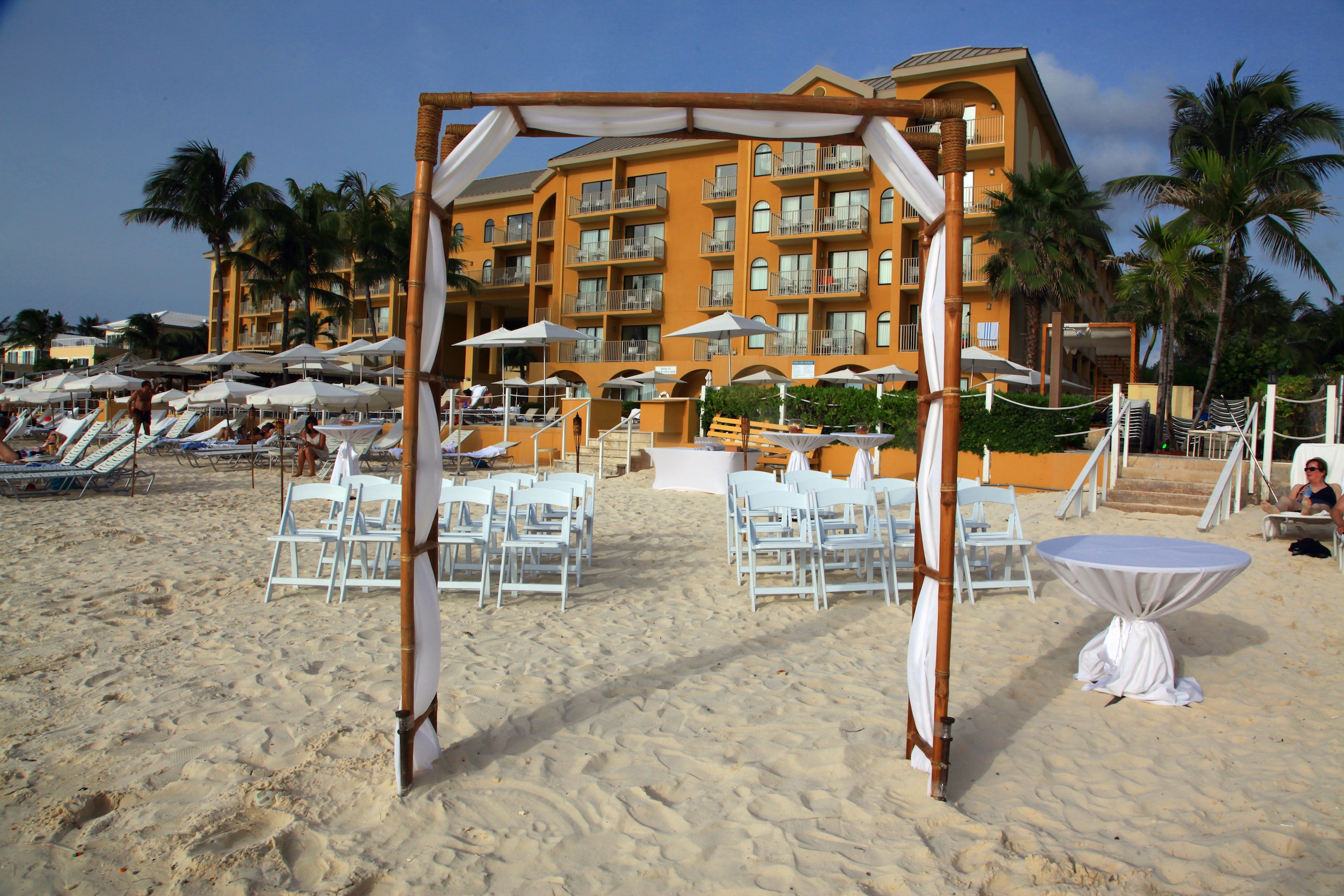 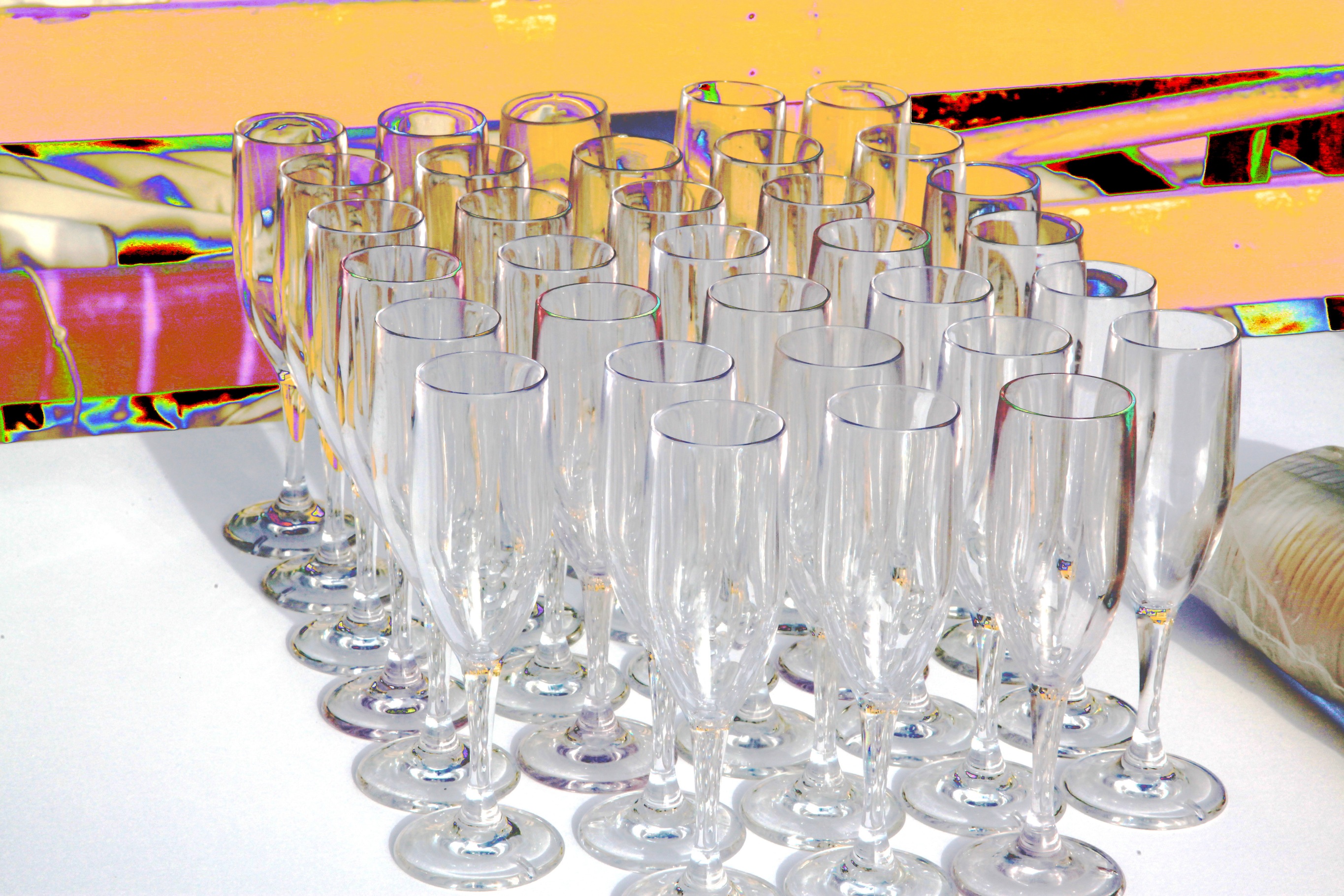 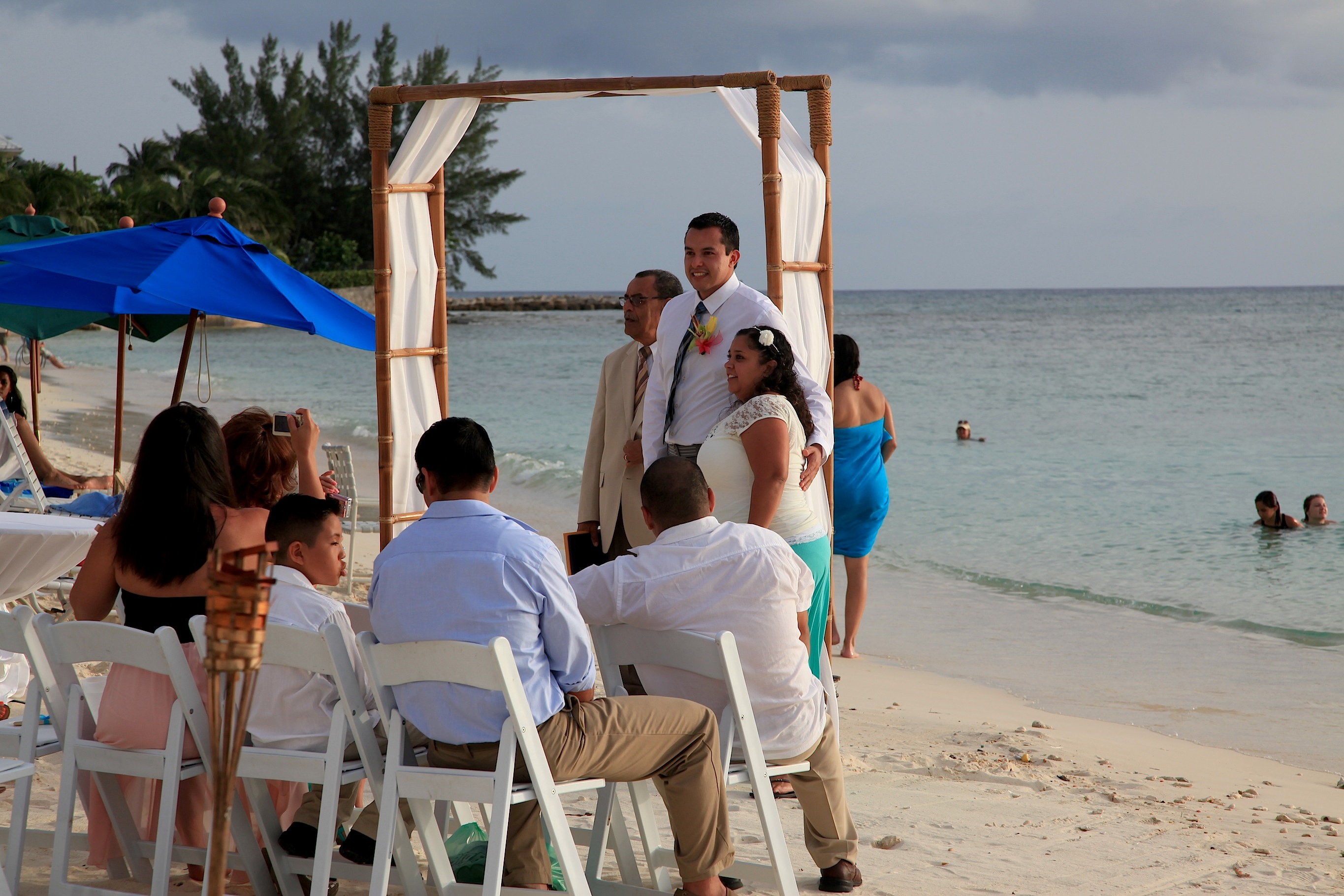 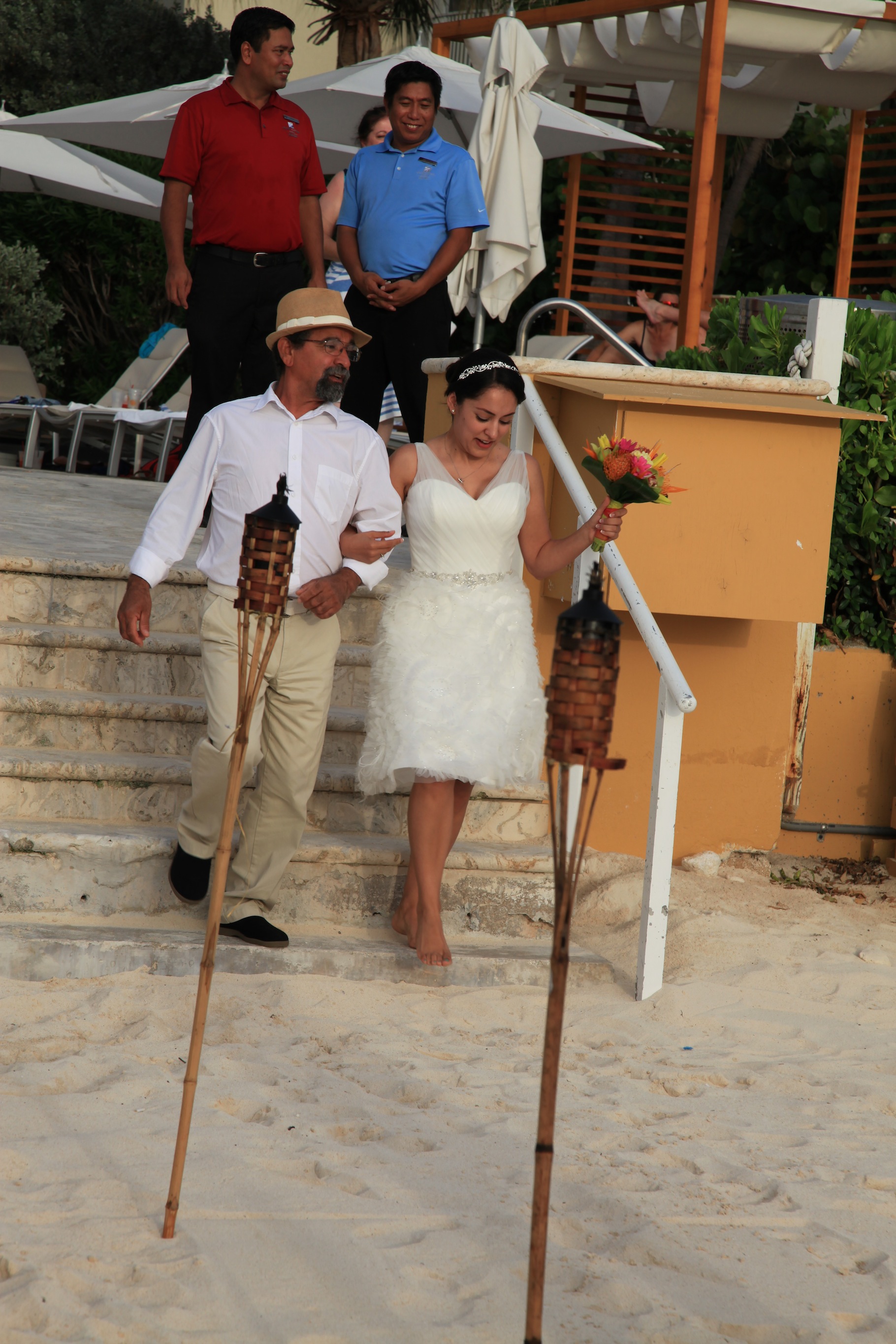 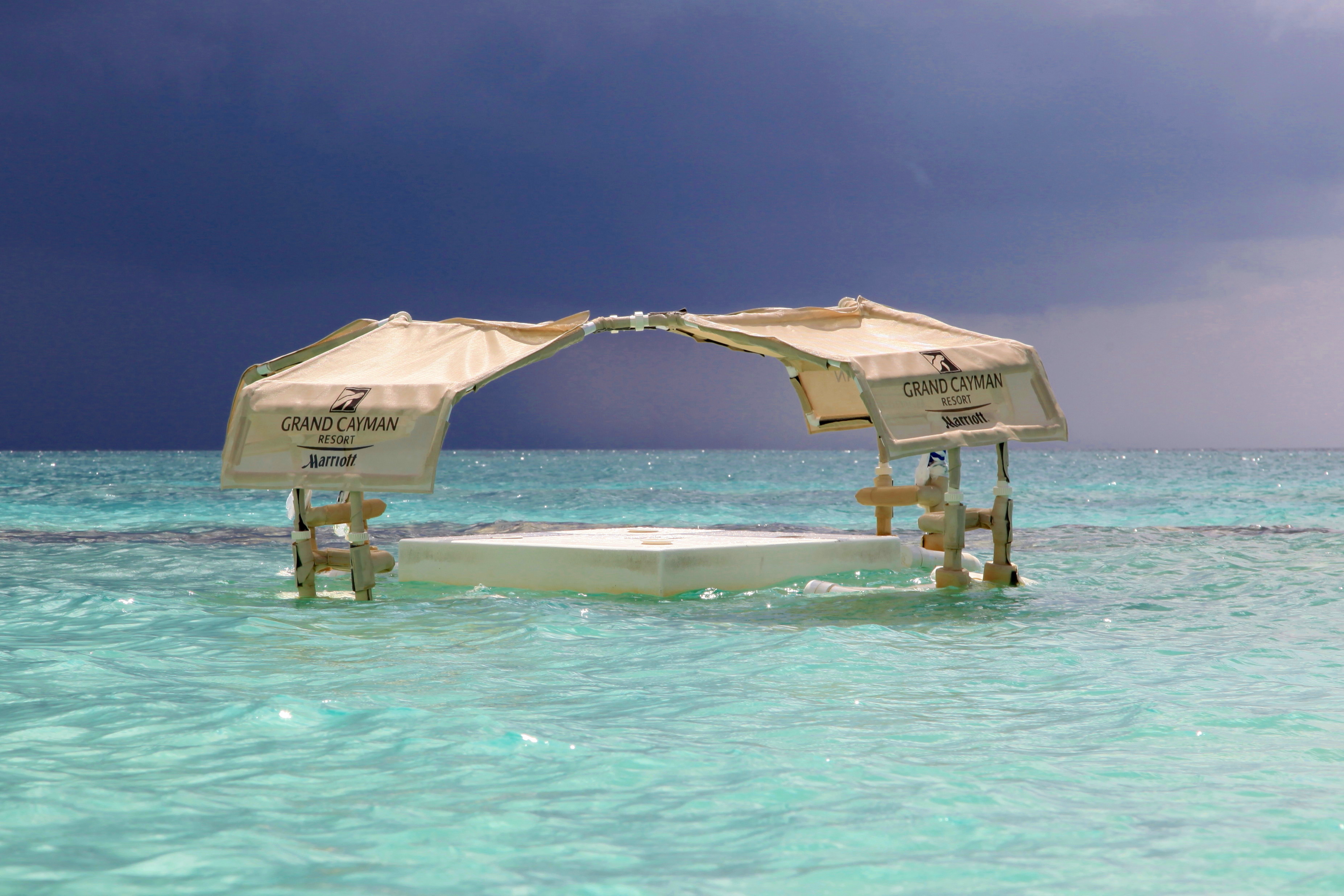 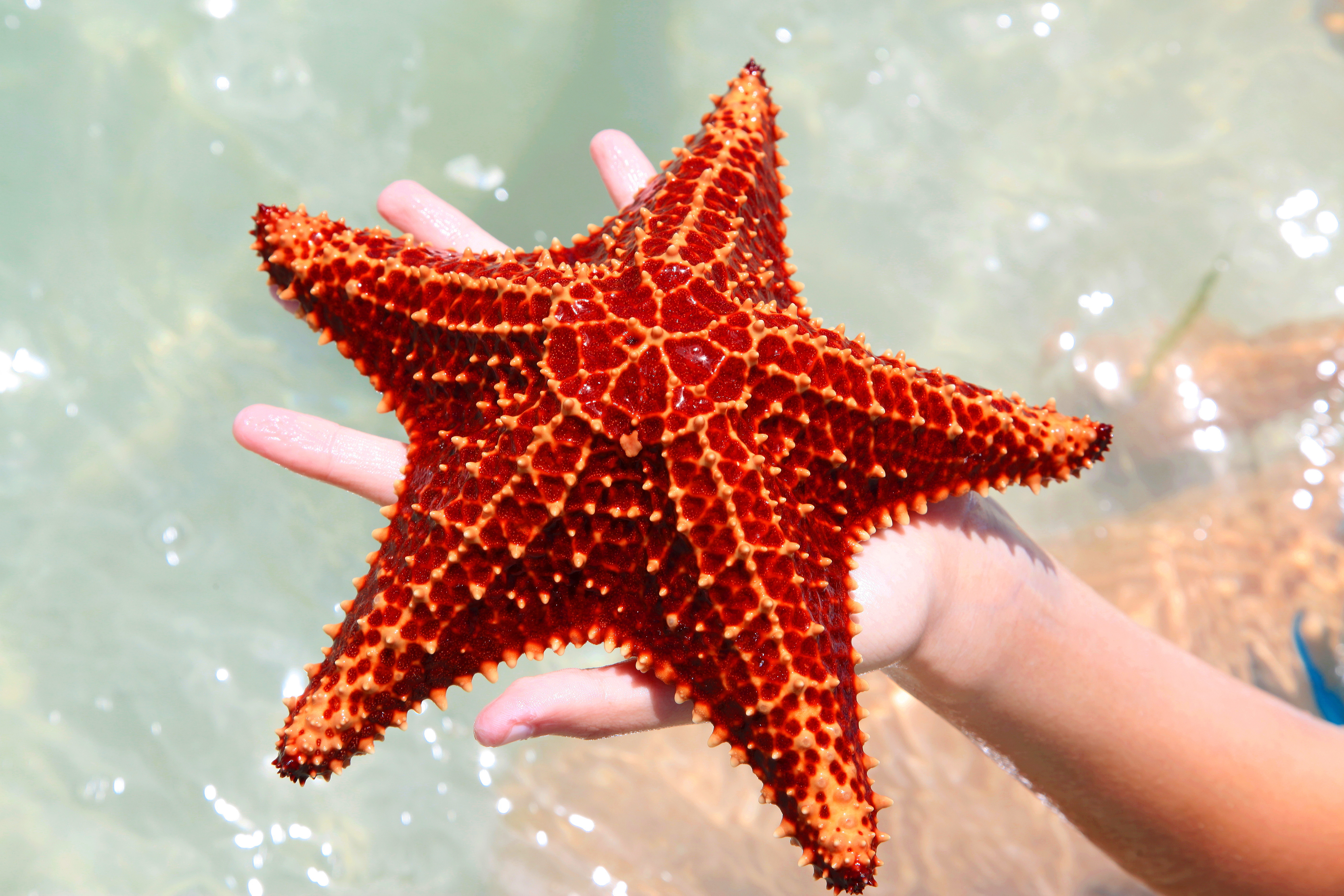 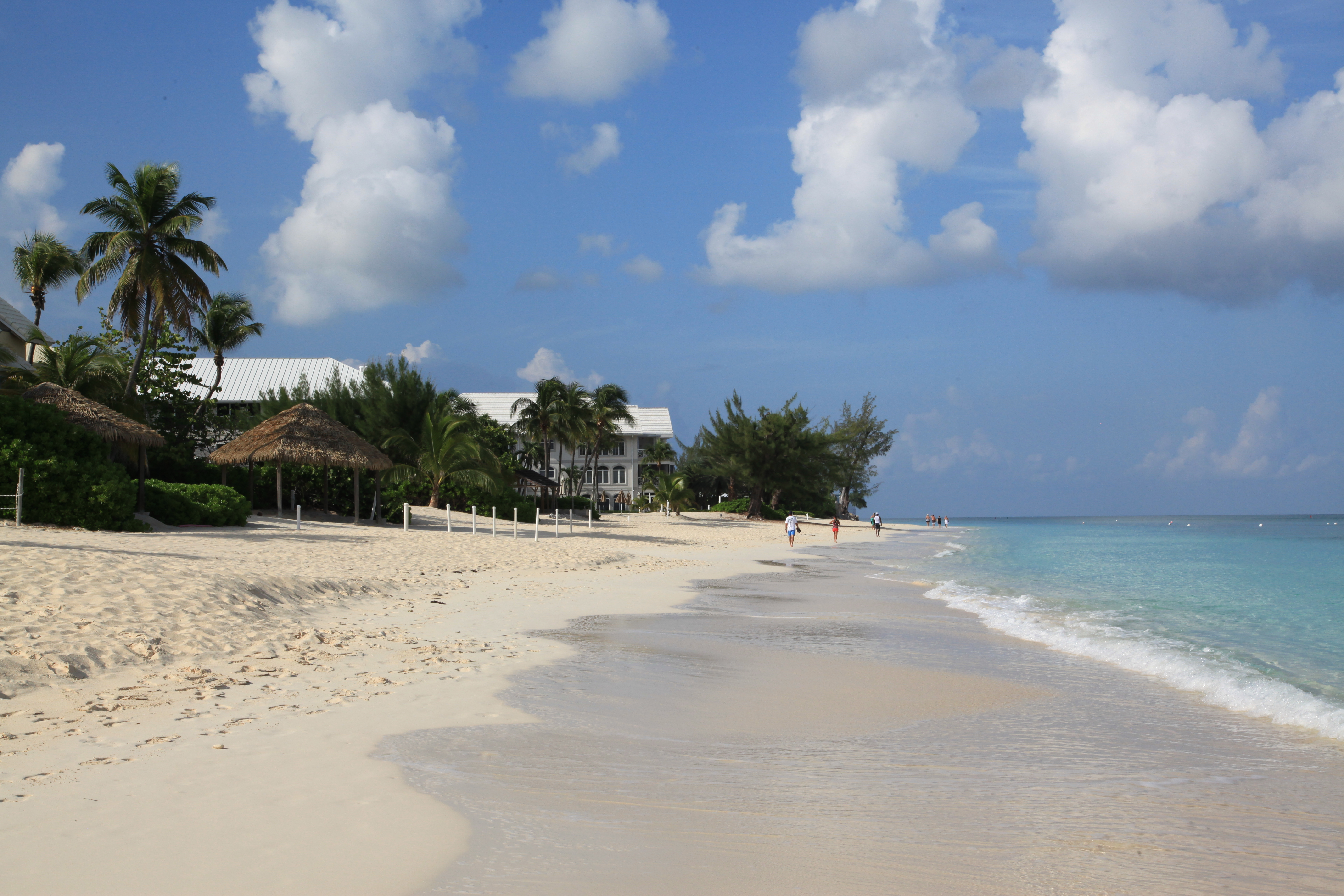 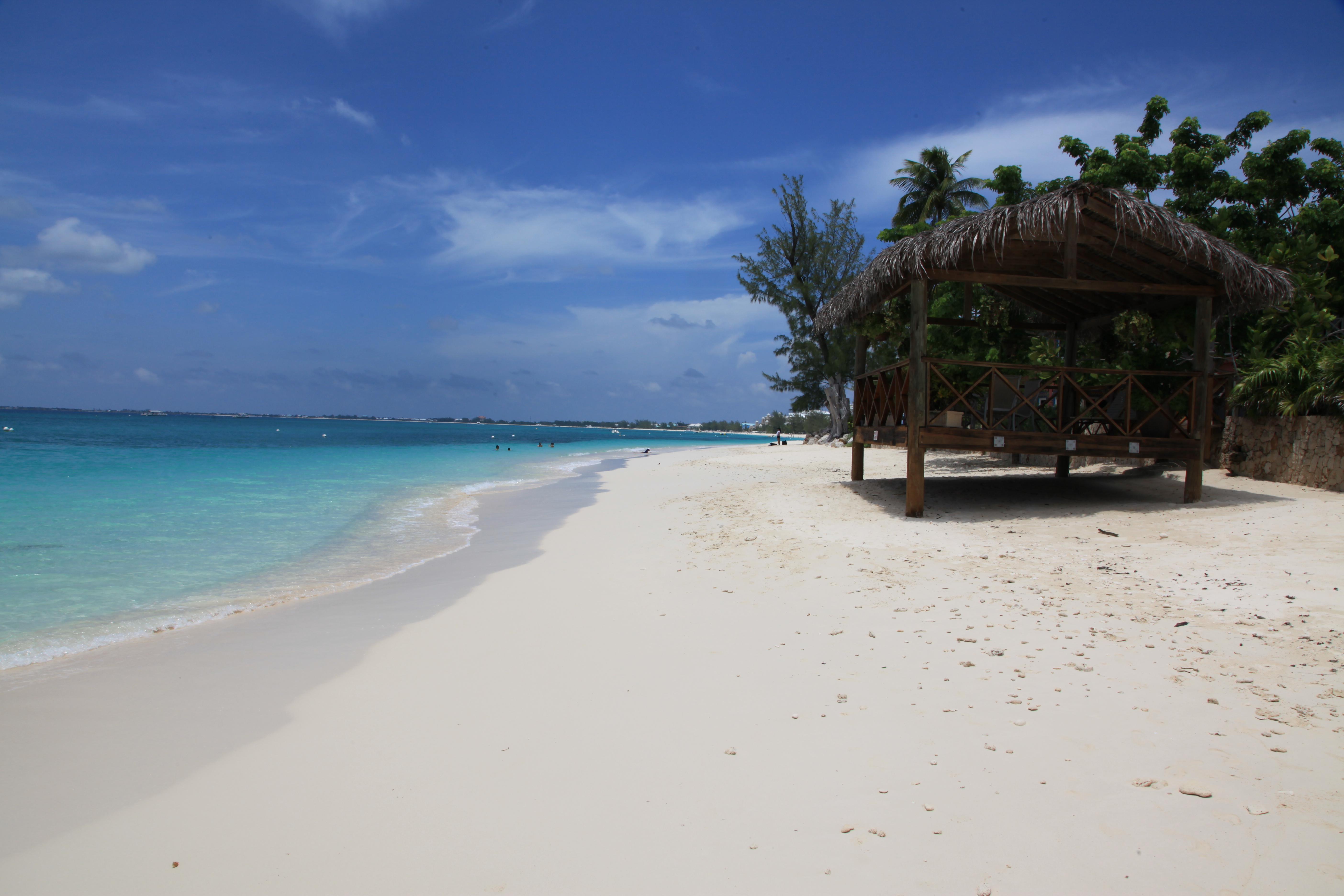 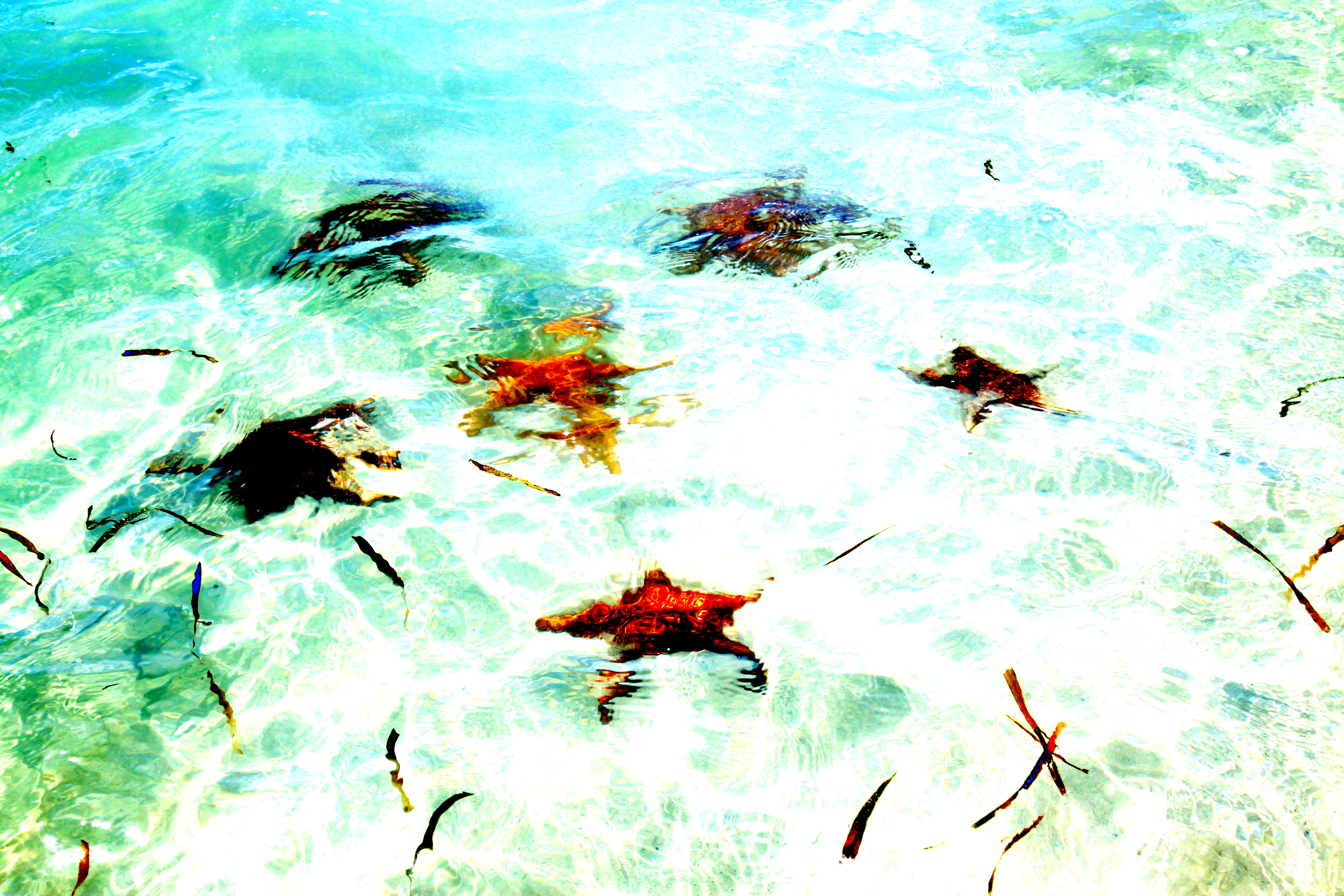 In general terms the food is superb if rather expensive. Many meals are fish based with excellent quality and also good sized portions compared to some of the anorexic fish that get deported to UK. On the other hand they like their ” bad food” too and many good burger restaurants and suchlike exist, including one that smells at you as you arrive at the airport and clear baggage hall. What however is striking is that the food in the airports is excellent. Take Landvetter airport in Gothenburg, a small airport really but the quality and choice of the foods puts Heathrow to shame. If you are a cake lover then allow yourself an hour and 1000 calories to indulge before your flight. Some of the food combinations also make novel cuisine. Take the combination of cod and chicken in a gravy that i was served at Clarion Post hotel. Excellent and the combination works. 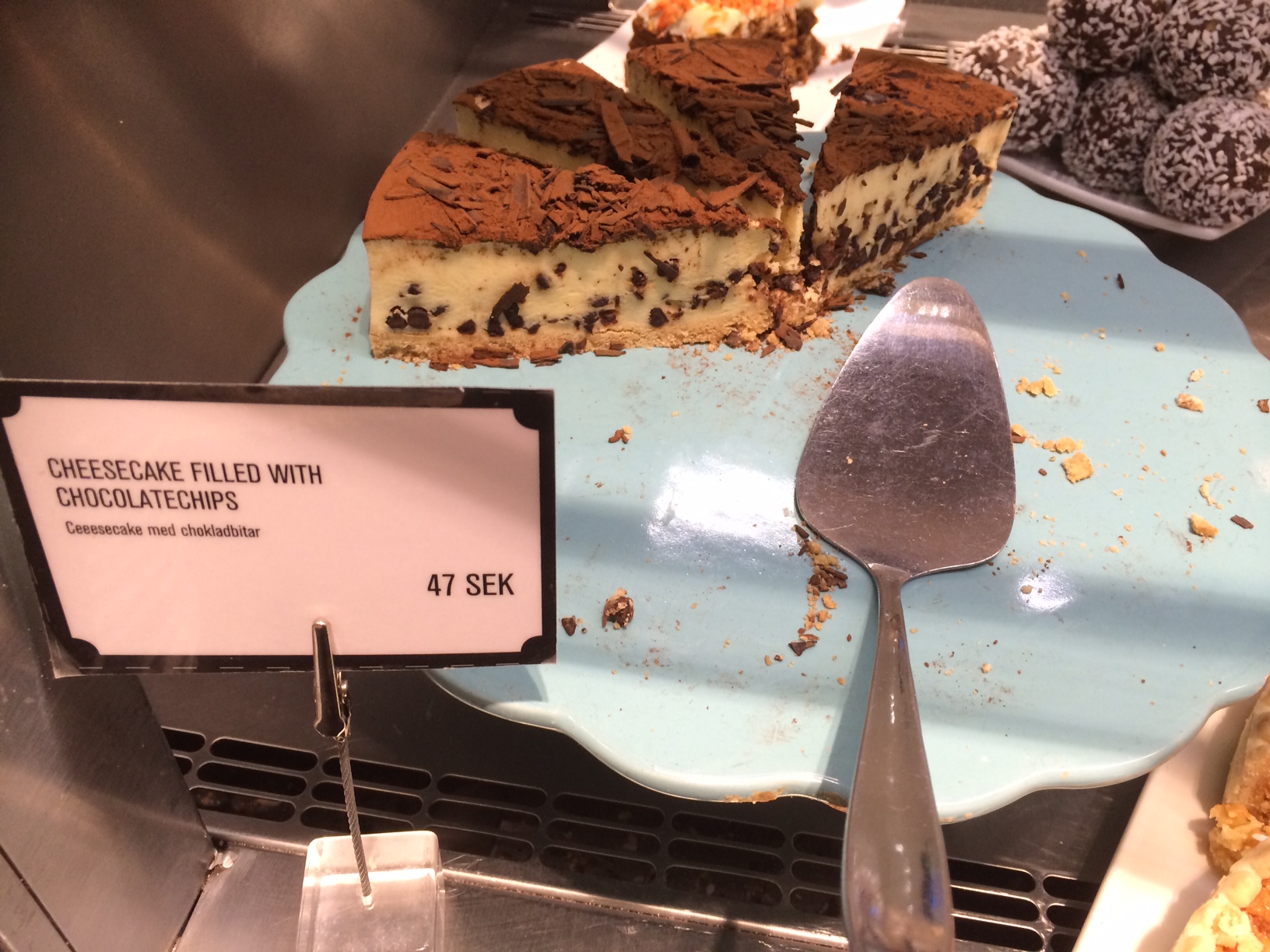 Although I have been to Stockholm a few times I have never truly appreciated what a pleasant city it is. This time snowbound, everything looked cute but everything worked. Trains and planes and cars were all on time, taxi drivers spoke eloquently and engaged passengers in meaningful conversation. The people all looked young. Maybe the old ones get locked away in some sinister plot. As one arrives at Arlanda Airport, they really do play ABBA music to welcome you and photos of famous people like ABBA and Roxette adorn the walls of the luggage reclaim area. T

There is a price to pay and that is literally true. This city is expensive and is best visited when someone is paying the bill. A Croque Monseiour would cost you over 12£. Coffee usually is around 4-5£. Hotels are pleasant places where receptionists are helpful and smile. They are also warm. One…

Reflections of Sweden. A country where the Wi-Fi is free

Spending time in Sweden is not a hardship. The country is a vibrant and exciting country and populated generally by happy and well meaning people. Perhaps the only real surprise was that not all Swedish speak English. I flew into Stockholm and most people travel into the city centre on the Arlanda Express,  a sort of cheaper and better version of the Heathrow Express. The main city is full of restaurants mostly and of course the Ice Bar in the Nordic Light hotel. An OK hotel but the rooms were tiny and some larger clients may have had interesting times trying to fit into their bathroom/toilet area. But I spent most of my time out of Stockholm travelling to other places. Firstly a short flight to Malmo on Norwegian airlines. Now I mention them specifically as not only did they text me a boarding pass without me asking ( for…

Gothenburg is the second largest city in Sweden and the fifth largest in the Nordic countries. The population is around half a million and the city was founded in 1621. Gothenburg also has the largest university in Sweden with 60,000 students. Daylight cana last 18 hours in the summer and only 6.5 hours in December. When one arrives it seems a nice place with most hotels arranged around a central square with the Centraal Train Station on one side.

My impressions of  Gothenburg were rather coloured by the huge number of Eastern European immigrants begging in the square rattling their plastic cups in one’s face and trying to sell a magazine called ” Sofia ” which made me presume they were Bulgarian. They were hunting in packs and although not frightening to me, I could see that to others they could be persuaded as being so. In the evnings they were inside the train station taking up most of the chairs and seats and in the day they operated in and around the square. A head ” beggar” a large woman sat on a bench barking out orders in a language that seemed alien to me.

The city of Gothenburg portrays itself as “soft and more human” when dealing with poor EU migrants, local paper Göteborgs Posten wrote. But the situation is far from black and white.

In 2010 Gothenburg’s social services paid for 28 beggars to return home. In 2013 that number was 93. The largest increase of those sent home has been seen with beggars from Romania.Between 2010 and June of 2014, the Gothenburg paid to send home 135 Romanians. Norwegians came in second place, with 35 getting a free ticket home, and Bulgaria came in third with 23 beggars sent home.

The police in Gothenburg suspect the begging is organised, however that doesn’t make it a crime. There’s a difference if relatives are collaborating or if someone forces poor people to beg and then takes the money.

Several cases of human trafficking have been revealed in Stockholm where people have been brought to Sweden by criminal networks. Disabled people and children are in special demand by the networks.

The Gothenburg police have not been able to clarify if there is someone in the background making money from the beggars in the city.

In contrast the hotels are nice, comfortable and the staff ultra polite. The food is good, heavily fish-based. The affluence is obvious with hotels like the excellent Clarion Post having expensive Japanese Sushi restaurants. In the square one must avoid the trams if not the beggars as they take no prisoners and seemingly come from all directions. There is also an amusing angle with the emphasis in Sweden on living healthily, and thousands of bicycles in the square, but with some sponsored by burger companies. This seems a good city of not an exciting one. 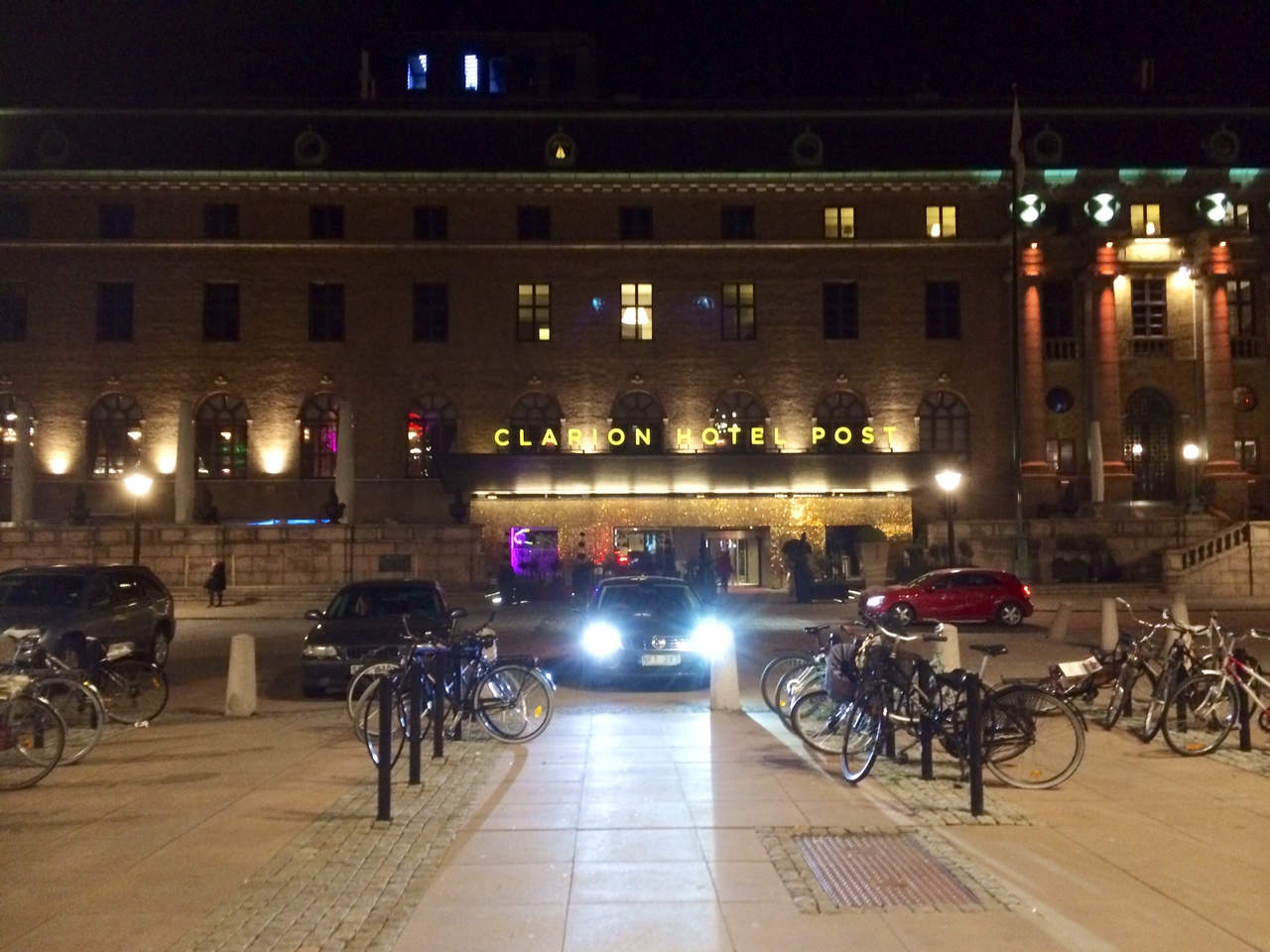