On Dec 26th in 2004 the Tsunami hit different Asian countries including Sri Lanka. Very many lives were lost, at least 40,000 and because records are not so excellent there numbers may well be higher. Sri Lanka in fact was the second worst country that was hit. Since then the country had had a resurgence with a second international airport recently completed in the south and the start of a motorway system embedded in the country, meaning what was previously a 5 hour trip from Colombo Airport to the south is far nearer two hours now.

What however many people remain unaware of is that there is a museum devoted to the Tsunami. From the outside it does not look like a museum, in fact it looks remarkably like a ramshackle house that was hit by the Tsunami in the Pareliya area just back from the coast. This is exactly what it is, a house ruined that has been left essentially damaged but turned into a small museum that houses photographs, paintings and stories of how local people built up their lives from scratch. There is free entry and one can leave donations in a small box.

The aim of the museum is to keep the stories alive for future generations and show people what actually happened.

When I visited in August 2014 it has to be one of the most emotional places I can recall visiting.

The museum is almost opposite the National Tsunami Monument near Pareliya junction ( where around 2000 people on a train lost their lives that morning), and is on the main road traveling north out of Hikkaduwa around 4 km or 9 km south of ambalangoda.

Further information can be got on info@kunstkoffer.nl

Below are a selection of photos I took of the photos in the museum, I challenge anyone not to find these things quite emotional. 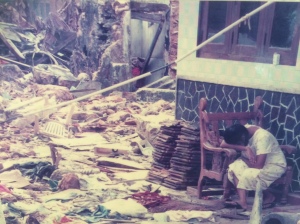 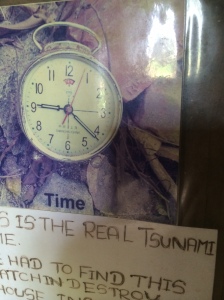