Archive for the tag “rotherham fc”

Jota Scores One of The most unusual penalties of all time

The sequence of photos shows Jota scoring an injury time penalty to put Brentford 3-2 ahead having conceded an 87th minute Rotherham equaliser making it 2-2. A hand ball decision was given against Semi Ajayi and the first photograph below is of the young Brentford debutant, Justin Shaibu appealing for the penalty.

The whole of the second half was played in constant rain making the surface slippery. The photographs show Jota slipping when striking the ball and ending up horizontal while scoring an excellent penalty. The celebrations speak for themselves. 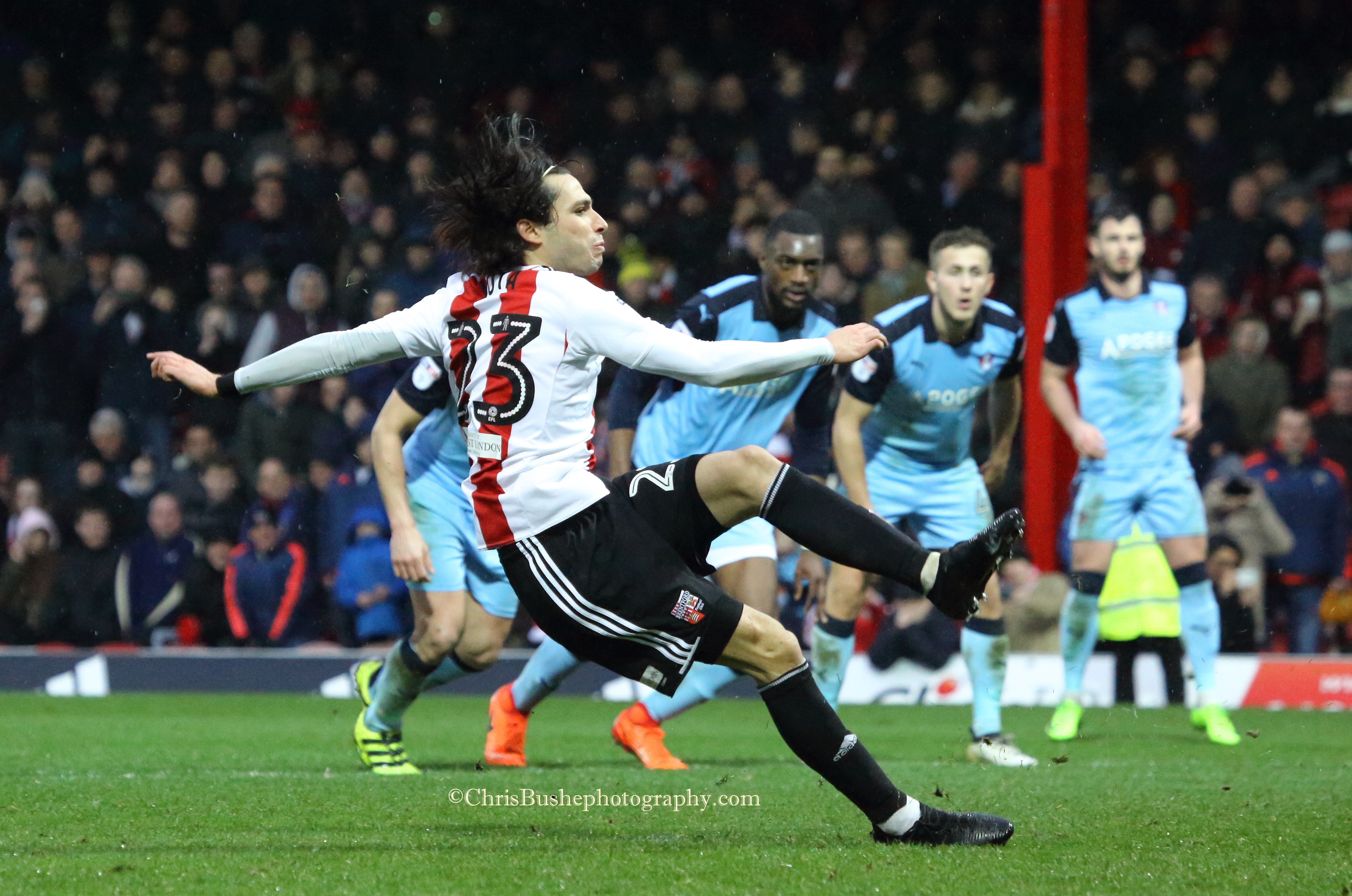 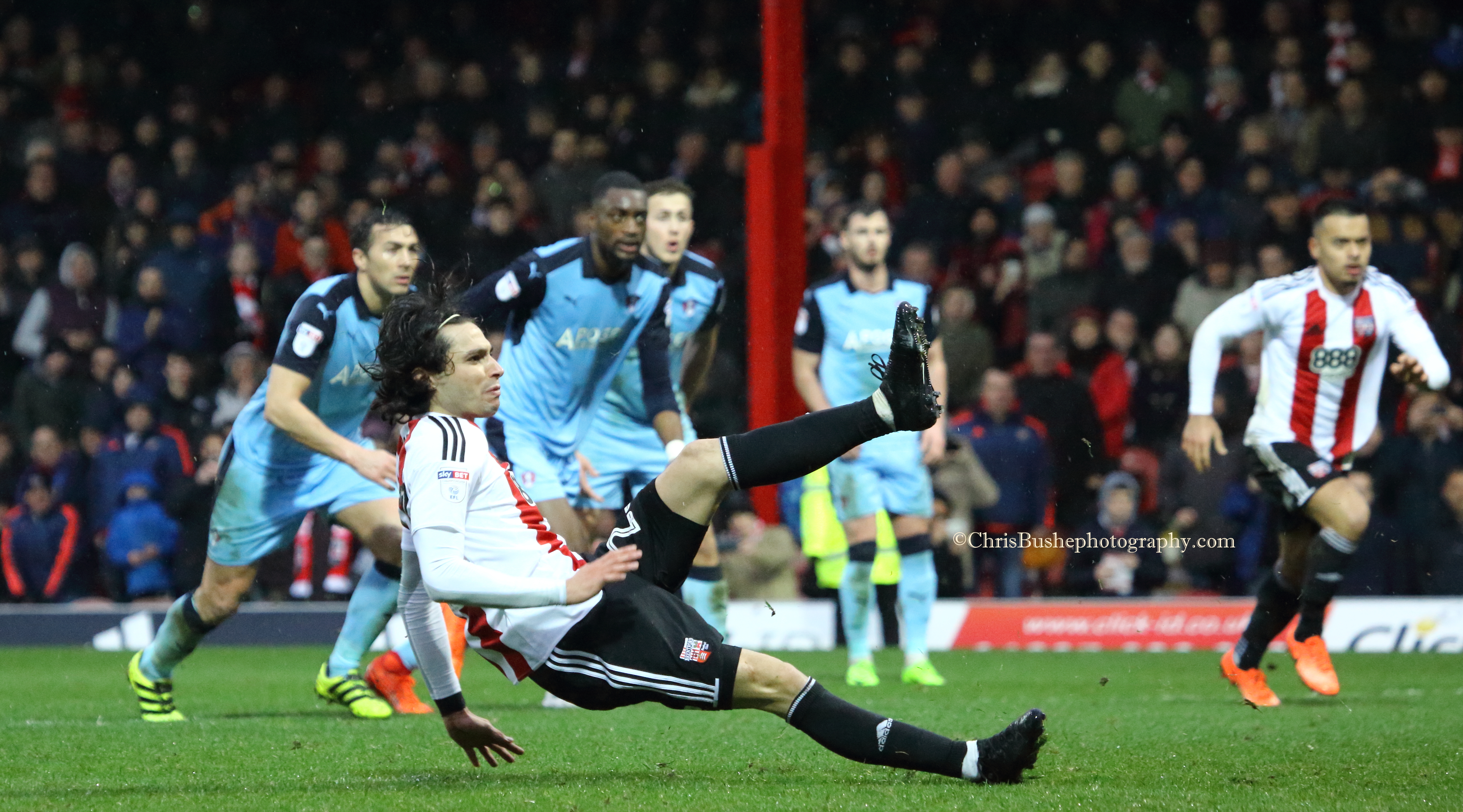 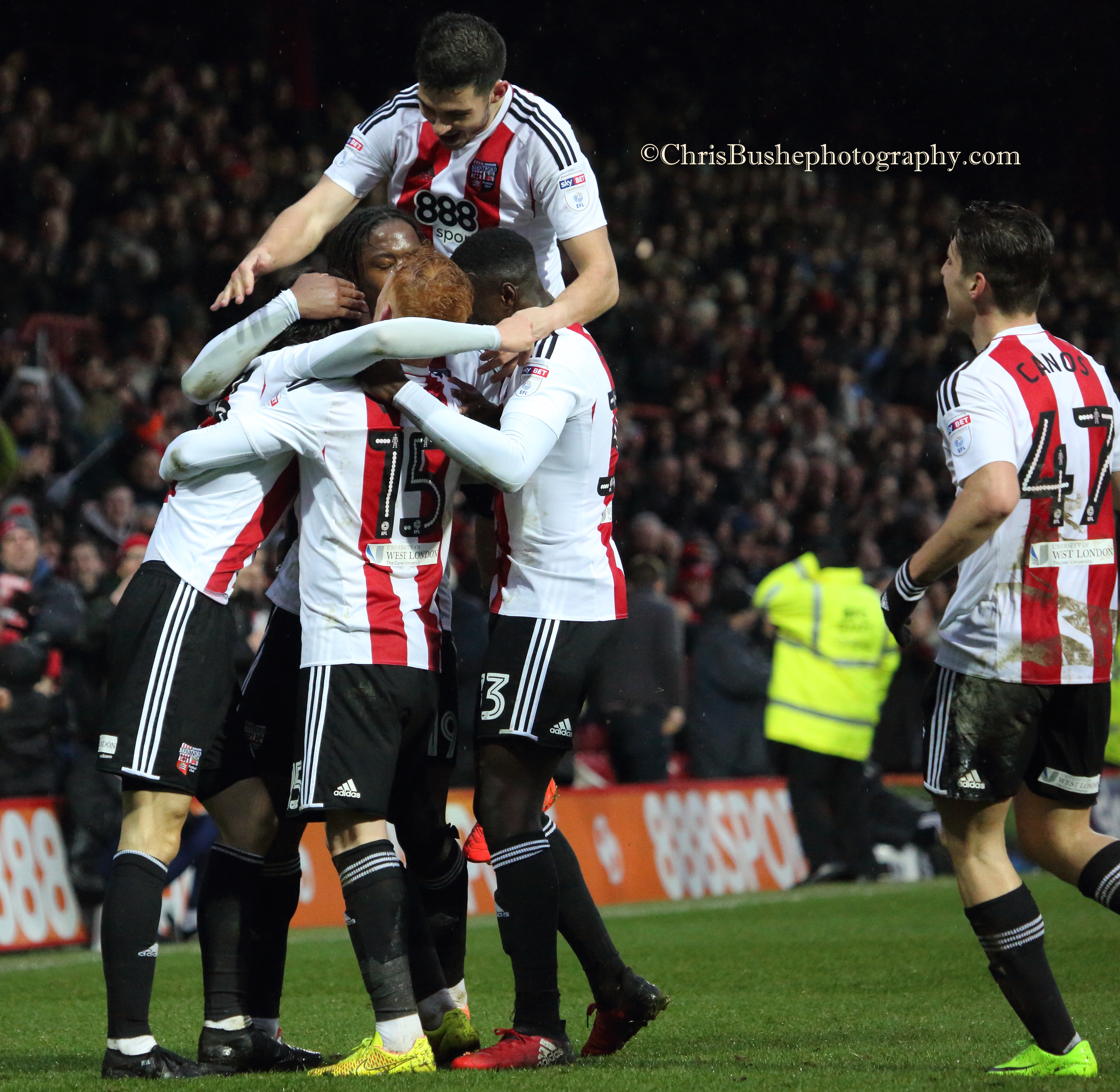 Was Brentford 2-1 Rotherham one of our most important games ever? A few thoughts and photos

This might sound ridiculous to the casual football observer and critic but this game rates up there with play off finals in order of its importance. The increasing turbulence and mutterings of discontent against the owner, manager,players and no doubt the programme sellers has been assuming absurd proportions. Last season was a one off. A group of committed players, playing well beyond their potential at times, a few good slices of luck  and importantly a relatively injury free season allowed the stars to align and Brentford to achieve an outcome almost undreamt of.

This season has been a disaster so far this is true. Some of the more worrying elements come in almost forgotten metrics such as a significantly reduced number of travelling fans, less vocal support from the home crowds and most worryingly for me, the reduced tempo and work rate that has been the norm this season. Of course the results are important but the manner of the performances are what dictates the pleasure or displeasure levels of the Brentford faithful.

What we saw yesterday was a spirited performance that maybe deserved the 3 points despite being at times the weaker side. The work rate was high and the effort cannot be faulted. The performance of Jake Bidwell was one of his best in a Brentford shirt.

There can be no doubt we were lucky to win and the neutral observer would have scored this as a draw. An exciting game played by two teams who found it difficult to defend well.

The three points are like gold dust. They give us some breathing space, introduce a winning mentality confidence and importantly consign Rotherham to at least another week below us in the relegation zone. That we are beating the weaker sides is actually very important. All the three sides we have beaten represent sides that will be in bottom 8 places come the end of the season. Relegation for Brentford would herald another difficult mountain to climb to escape League 1 and we can see how difficult that is for large clubs such as Sheffield United. However this season ends we need to end it in the Championship and one can argue that the re-building process can now resume. I personally think some of the new signings will be successful at Brentford and some will not. I also think based on yesterday that Lee Carsley is moulding a unit in his style of play, more rugged and physical than maybe we have been used to. Let us see how that works out. 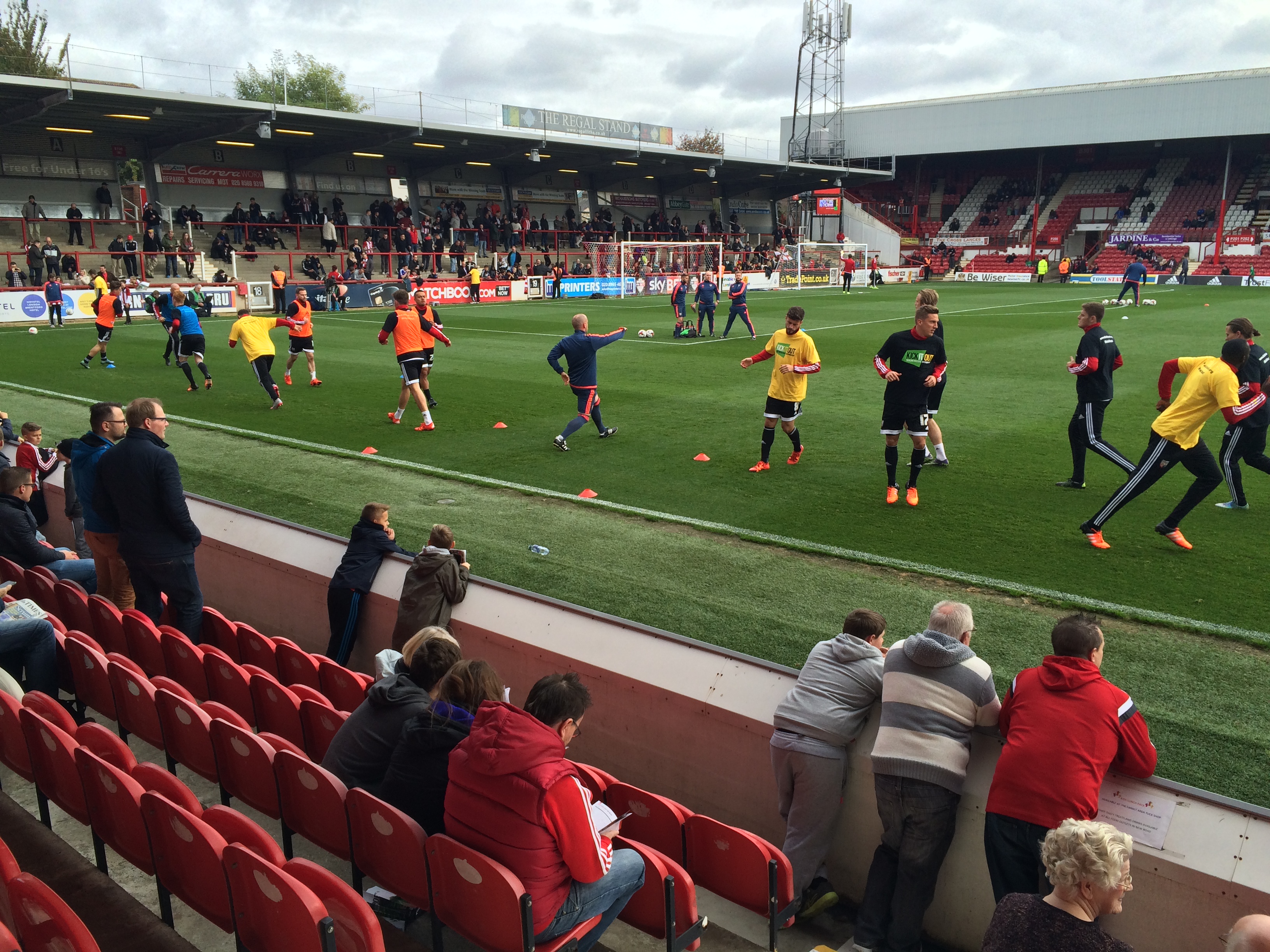 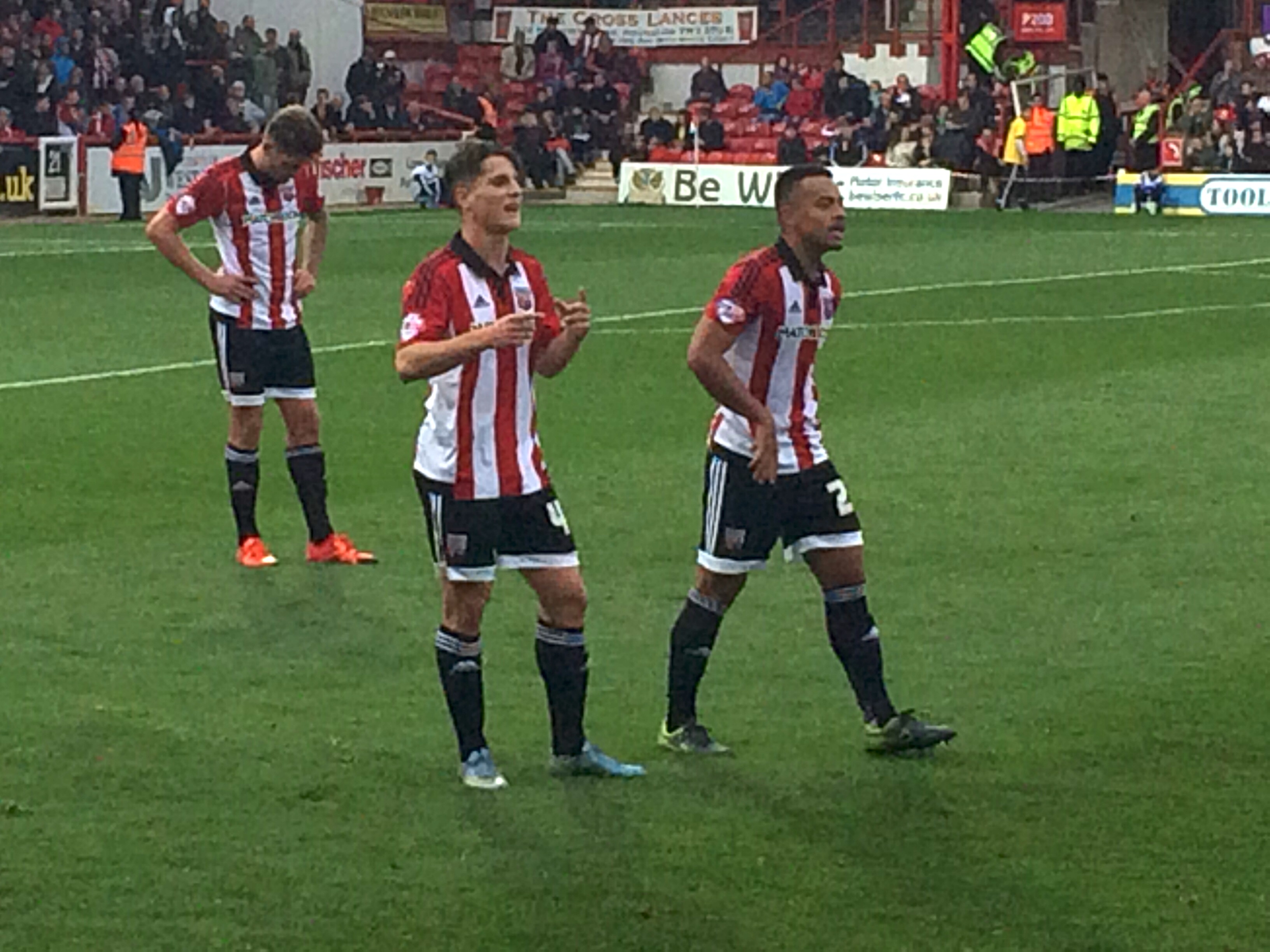 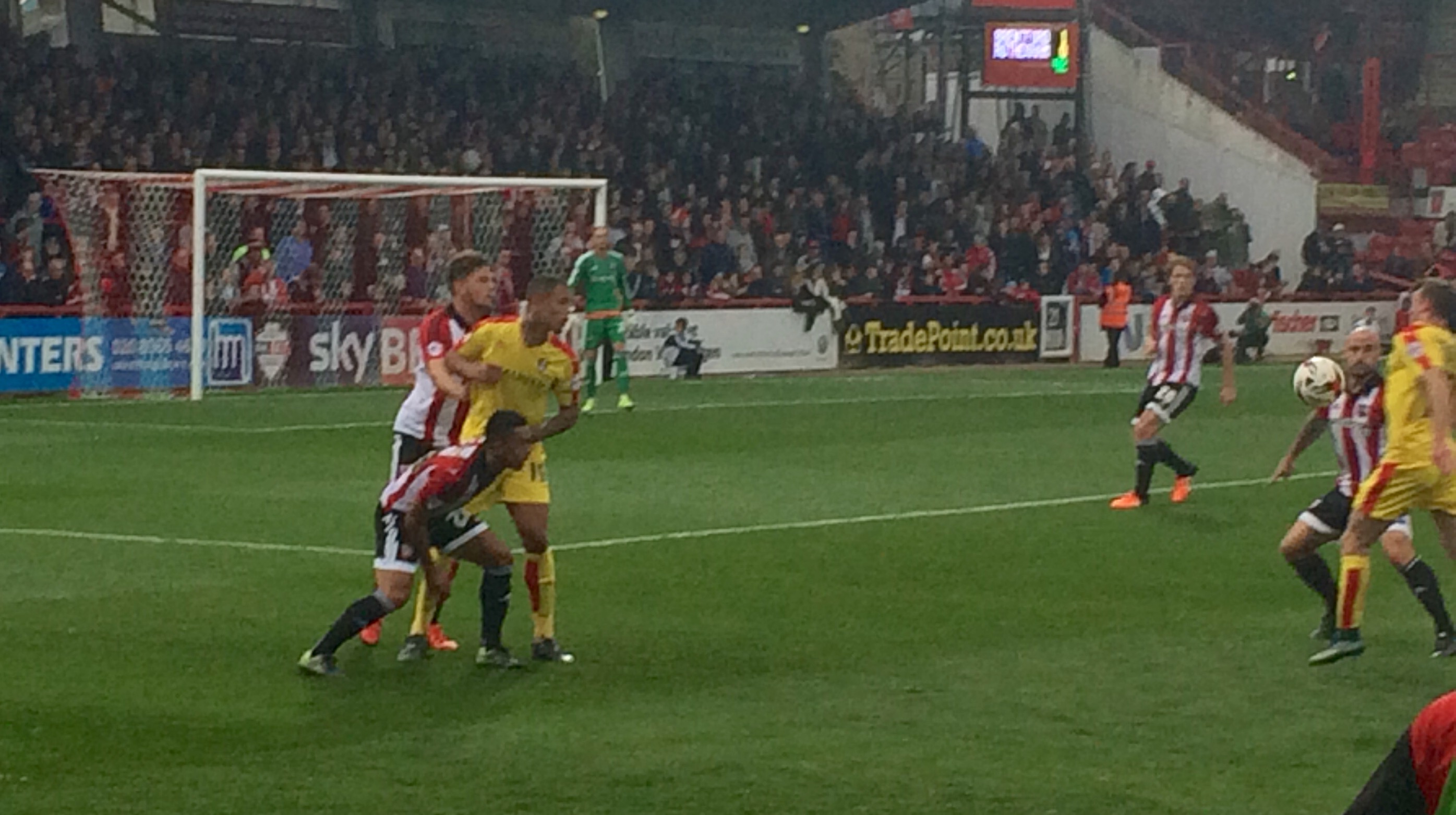 Brentford get promotion on an exceedingly Good Friday

Having followed Brentford for 50 years days like this are rare and rarely are they better. Looking at the maths just before lunchtime it became apparent that Bees had a chance of being promoted yesterday if they won and results went their way. Both happened. A tense game but perhaps more easily won than score suggests 1-0, a penalty at that, and Bees also missed another at the Ealing Road end…..

But the outpouring of happiness could only be seen in a small club over achieving and now wondering how much further we might go? We are no smaller a club than Fulham. Indeed in those days when Fulham flirted with relegation from Division 4, their crowds were in the 3-4000 mark and Bees rarely got anywhere as low as that in comparable times.

What has happened? Well Mark Warburton has happened. A manager in his first job taking over a third of the way through the season. Without doubt he improved the play and the players. He signed only a small number of good players instead of dozens of me-too’s. My own view that may not be shared by all is that he is a far superior manager to Uwe. That is a compliment and not a put down to Uwe.

These photos below show the exact moment we thought we had won promotion ( in fact because of that crazy Wolves v Rotherhams game, ending 6-4 eventually, we were a little premature). 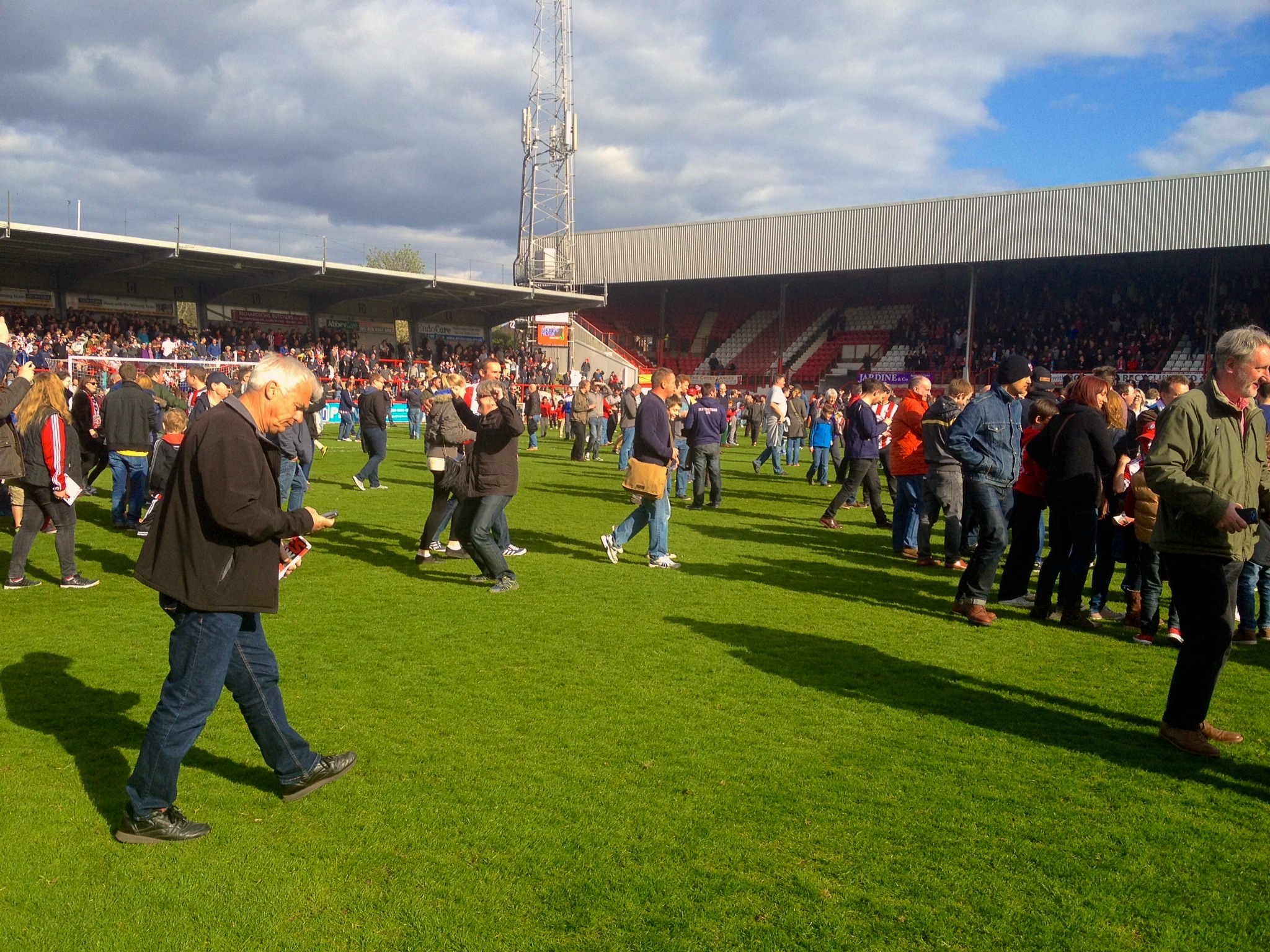 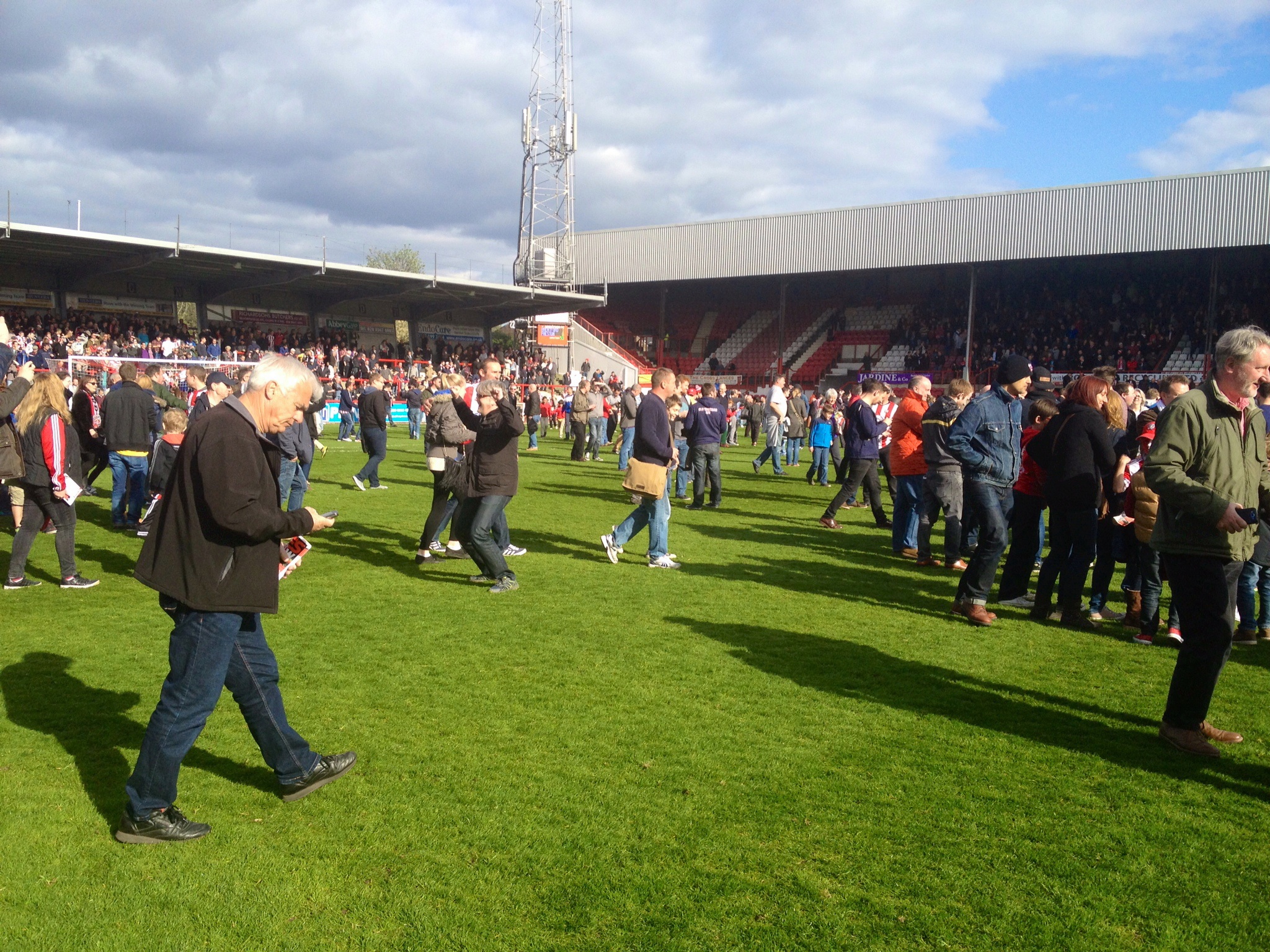 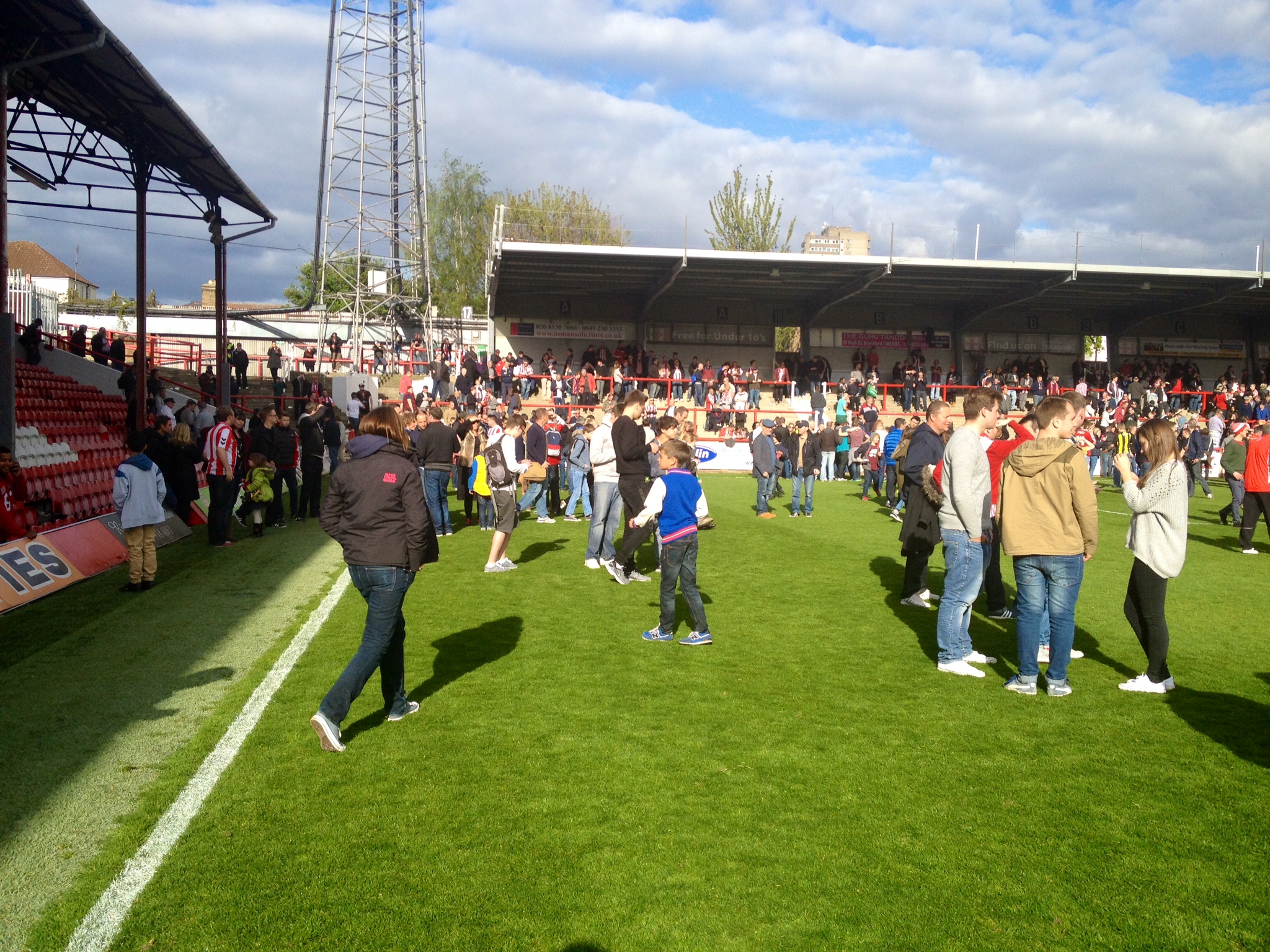 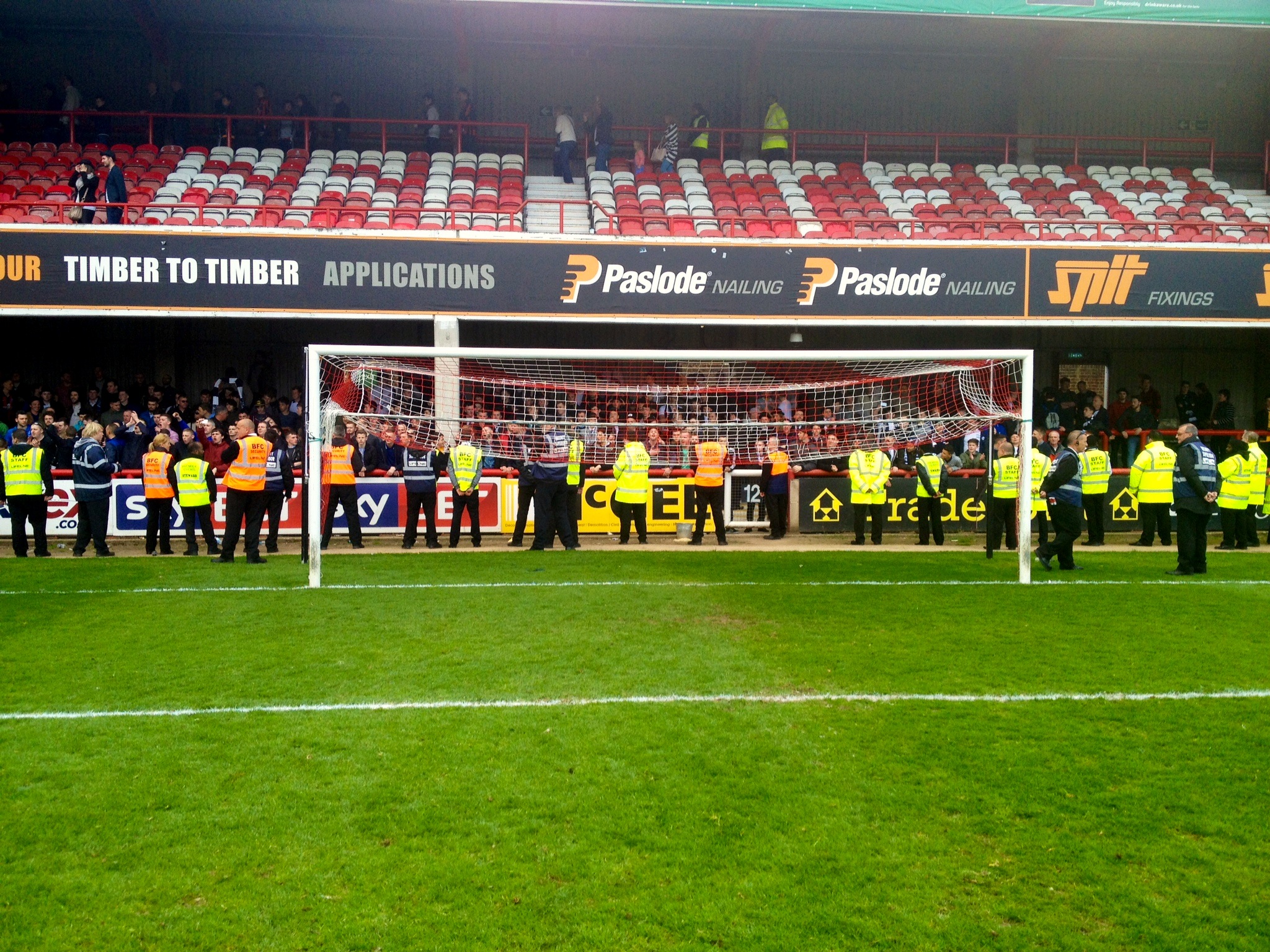 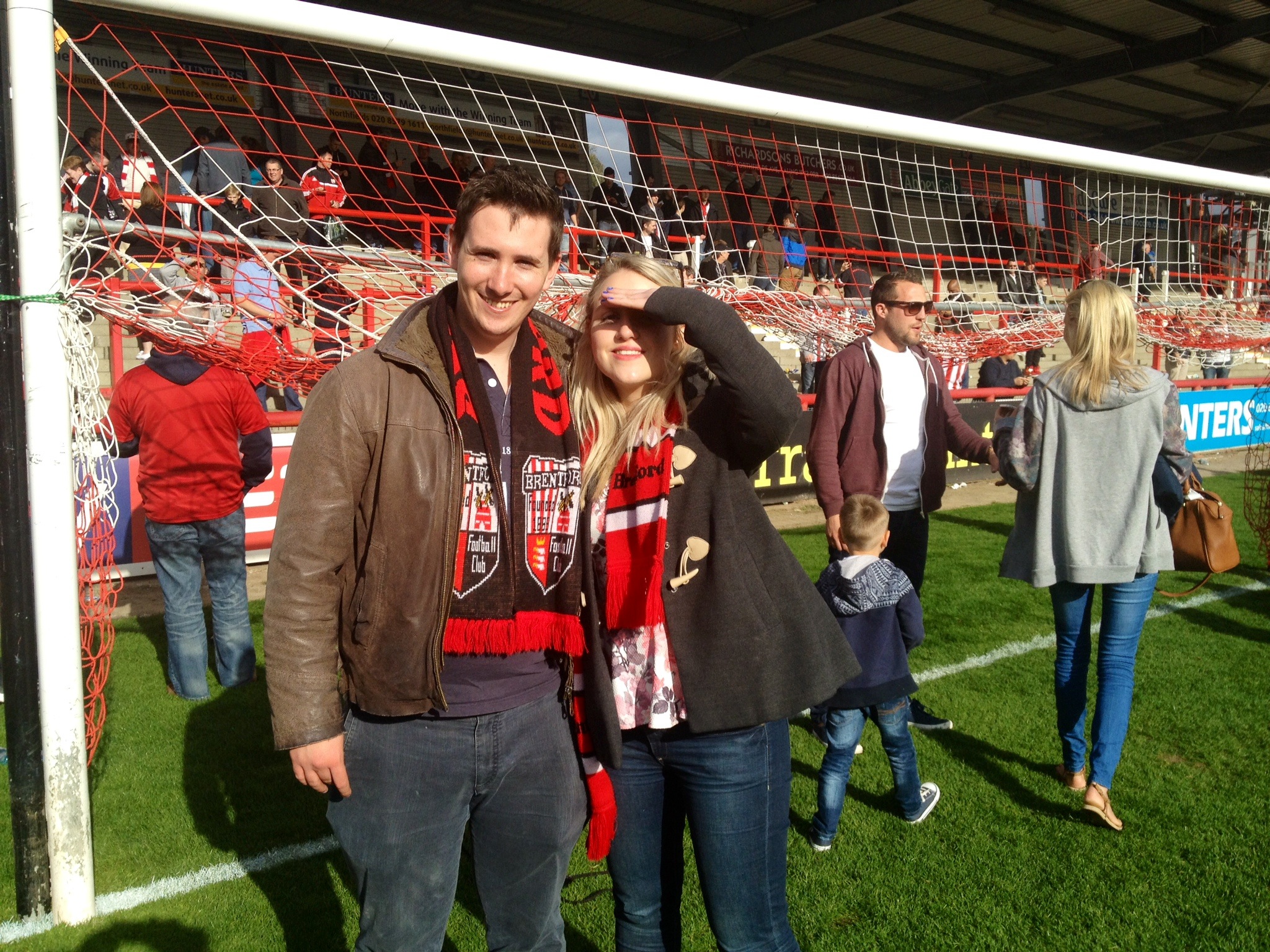 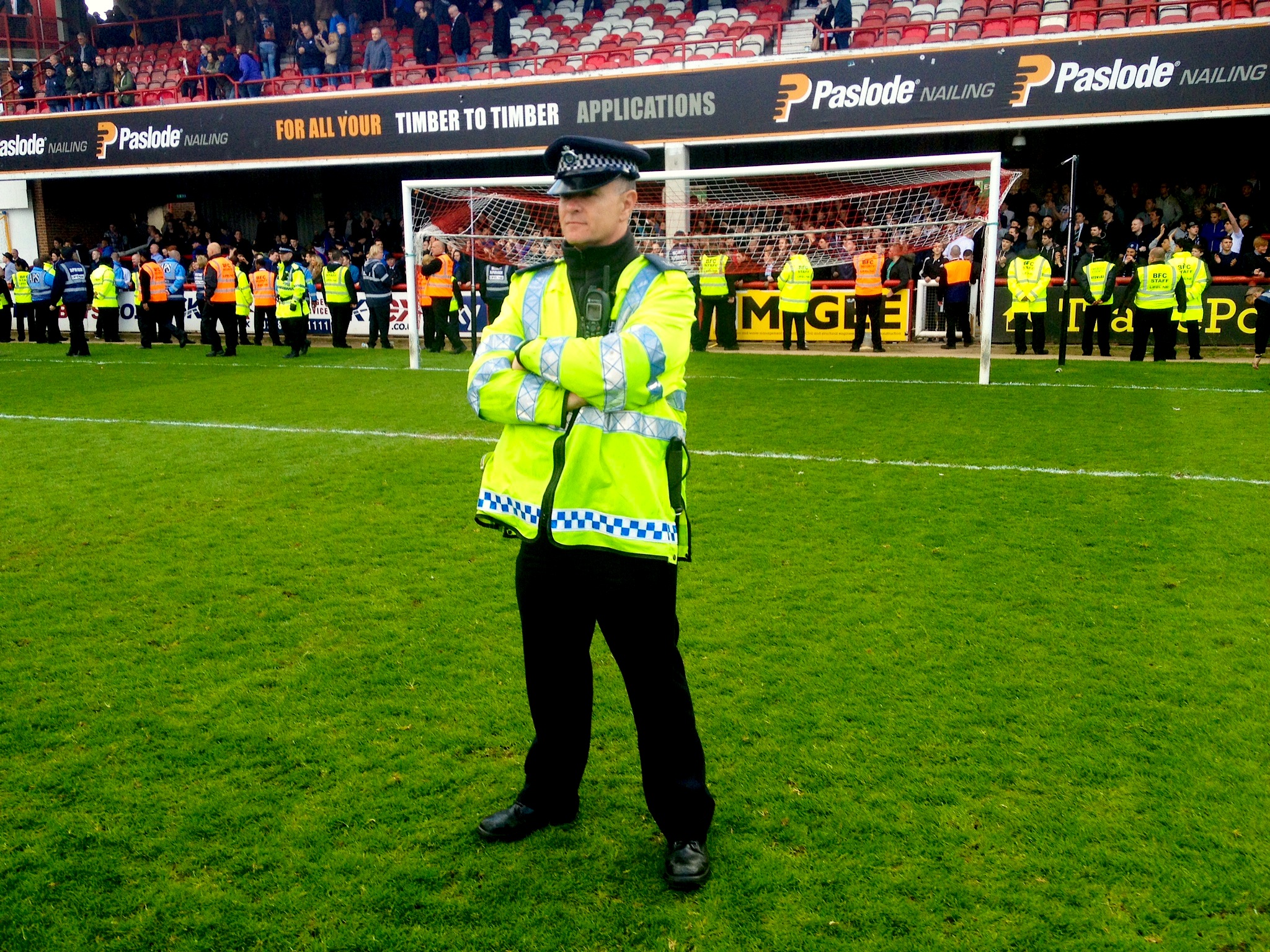