Trilogy of Sonnenallee. Part 2. Just When I Thought Sonnenallee could not get worse….

My little reading flock of this blog would have read my salient words and viewed my photos last night on exactly why Sonnenallee is not a first choice holiday destination despite its label of “Berlin” and in fact one of the large conference centres in Berlin. If Stieg Larsson can write a trilogy then maybe I can try a trilogy of posts from Sonnenallee.

If you have nothing seriously important to do, like deal with death/marriage/criminal justice system or are detained under the Mental Health Act, then maybe go read that post first before continuing. 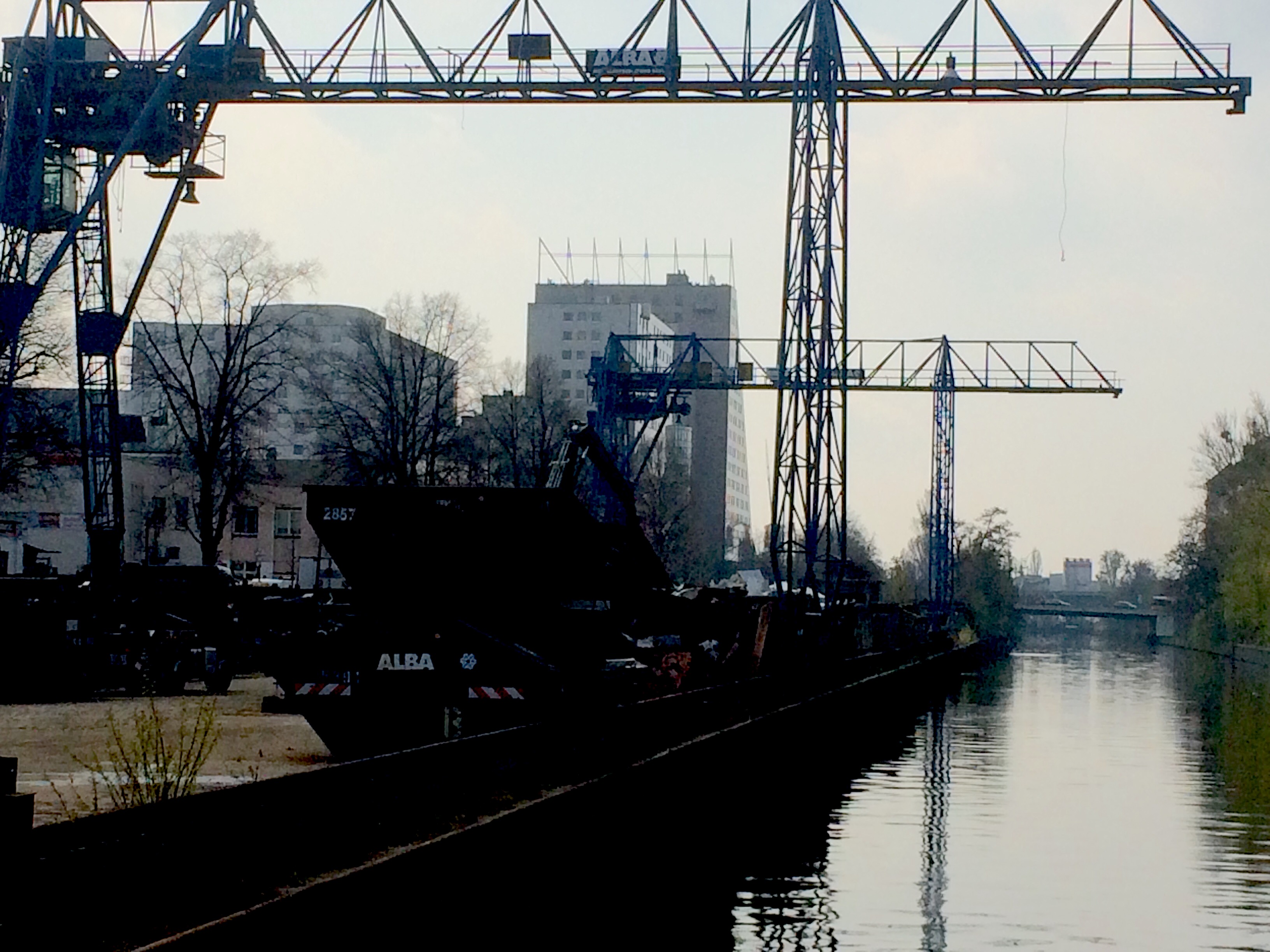 I had held some degree of excitement over visiting Berlin, but Sonnenallee is to Berlin what Tooting and Croydon are to London. Today I find things are worse than I had imagined. Immediately outside and within maybe 100 metres of the Estrel Hotel entrance lies the splendour that is a recycling plant complete with odours to match. 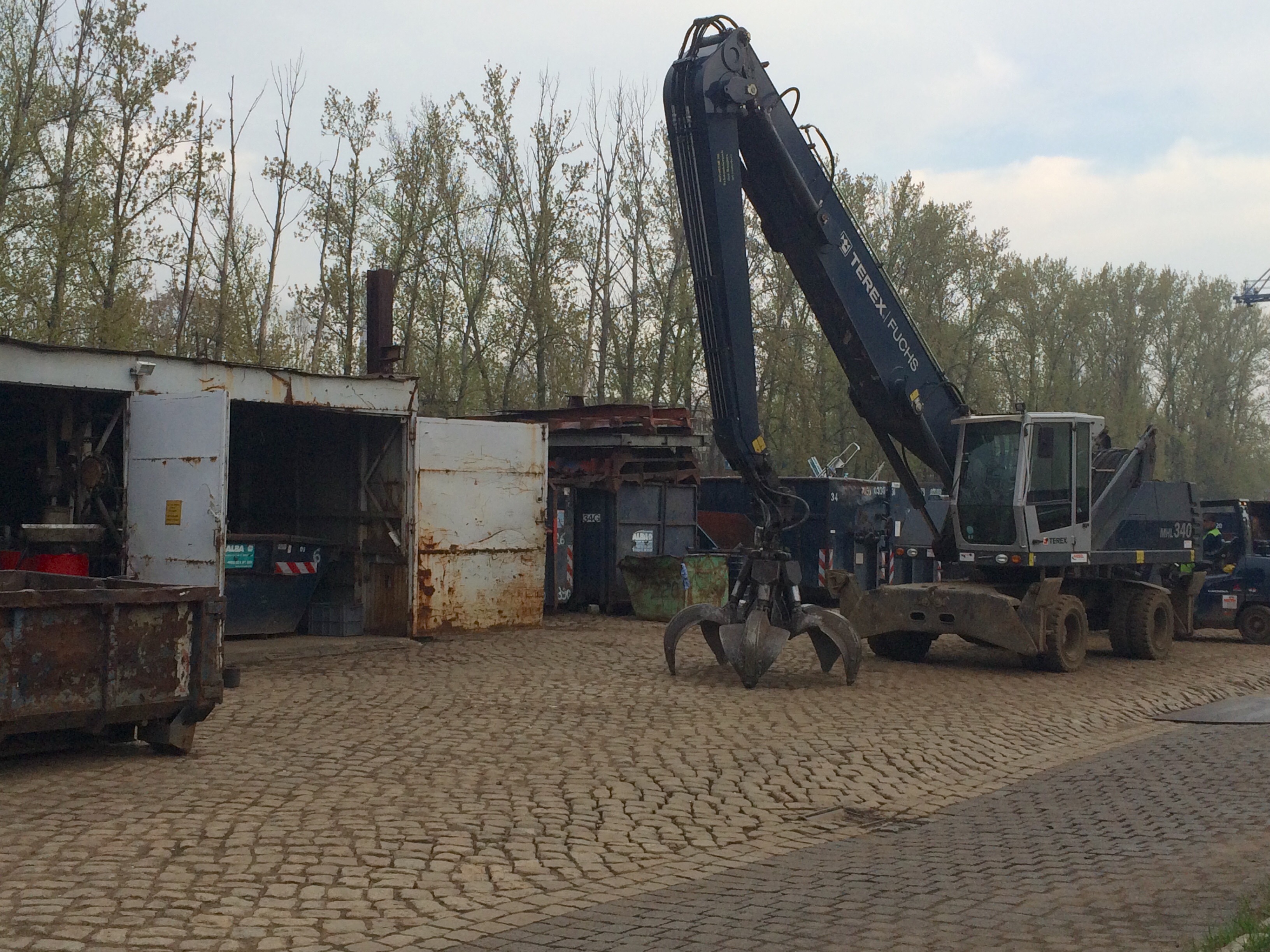 A little further brings one to a huge very industrial site that seemed to be making piles of sand and other aggregates. The road is dirty, dusty and has the usual affliction round here of vandalism style graffiti.

With one notable exception. And that is the curious thing about graffiti here, it is a complete admixture of some of the nicest graffiti I have seen anywhere in the world and some of the least pleasant graffiti, looking like it was painted by a hooligan undertaking a degree course in how to obtain an ASBO ( Antisocial Behaviour Order,  a UK thing we do, where we send those who commit antisocial acts somewhere else to commit more, rather than lock them up. Don’t ask me to explain). A block had been painted on two sides with quotations from the literature including Oscar Wilde. So I can now truly say I have read Oscar Wilde, but have no idea what he is saying as it was written in I presume German. 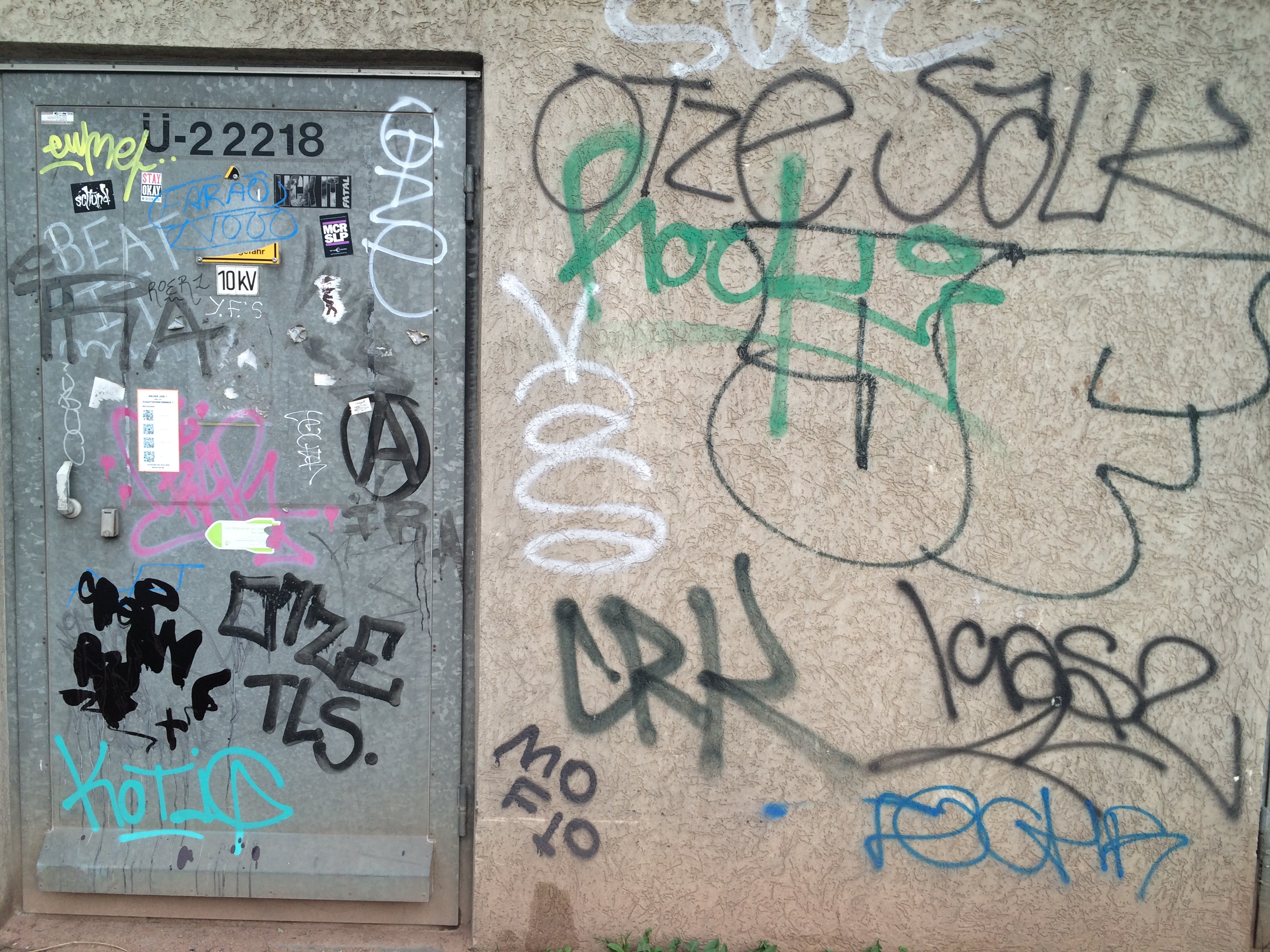 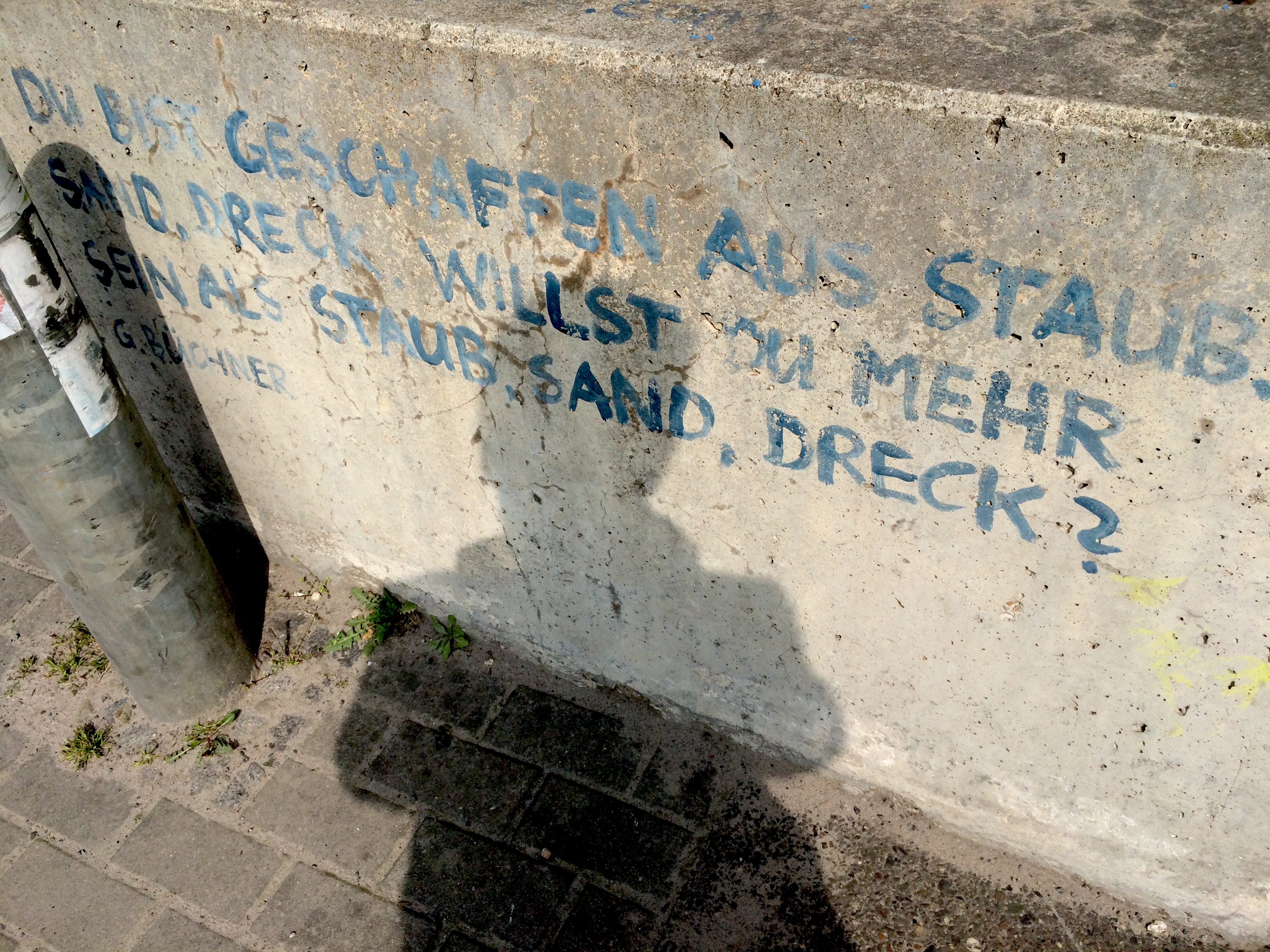 Decorating the road further were some huge industrial cranes and to complete the package there was evidence of a homeless tent camp on the top of essentially a pile of rubbish near the river. In this era how can we as humans allow people to live in this environment? In the frankly excellent Estrel Hotel maybe 300 metres away people spend £30 on a bottle of wine which could be more than my tent dwellers spend in a month. Not reasonable, not ethical and not right. 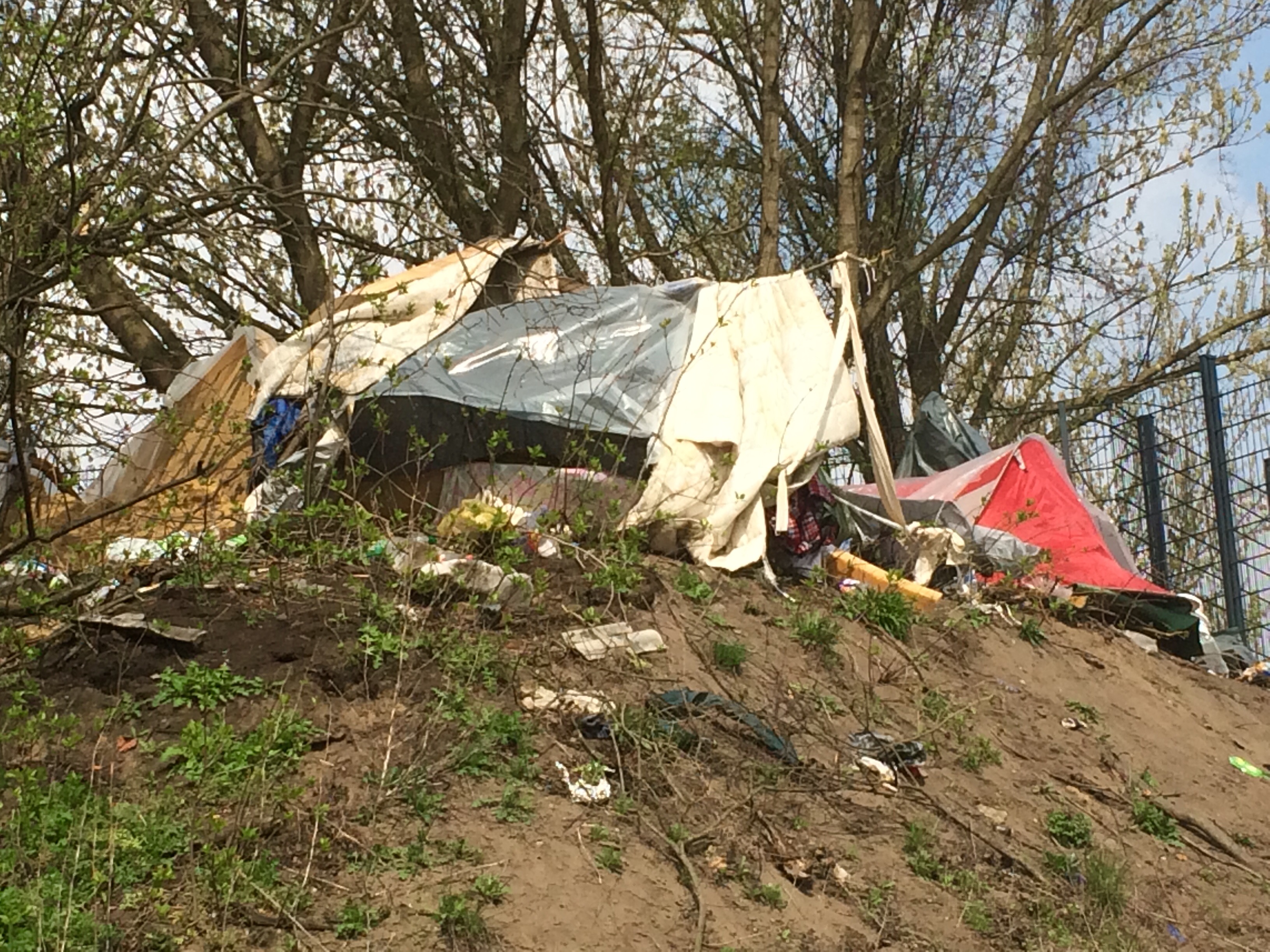 This rapidly became a far more unpleasant area than I had presumed yesterday. Some halfway decent graffiti art on the side of the bridge next to Tent City was the only redeeming feature.

Daring to venture a few hundred yards in the opposite direction  there were some nice smelling trees in blossom that gave the air a pleasant smell, and a single track railway line on which a tree had fallen and was blocking the line.

Big leaves on the line

Estrel Hotel Stands Guard Like A Jurassic Monster Over Sonnenallee

So my three highlights of Sonnenallee are in order: