Spending a day in a city never allows a comprehensive opinion on what it is really like, but first impressions here are good and a potential place for a short weekend break. A couple of things are sticking immediately:

The city has a nice relaxed feel to it, the restaurants were all full at lunchtime and maybe because they had limited menus of nice food at more than reasonable prices.  Rialto restaurant was my feeding trough and a nice place too. An excellent Wiener Schnitzel. A lot of building is going on and wherever one looks there are steepled buildings and impressive looking buildings, such as the Rathaus. 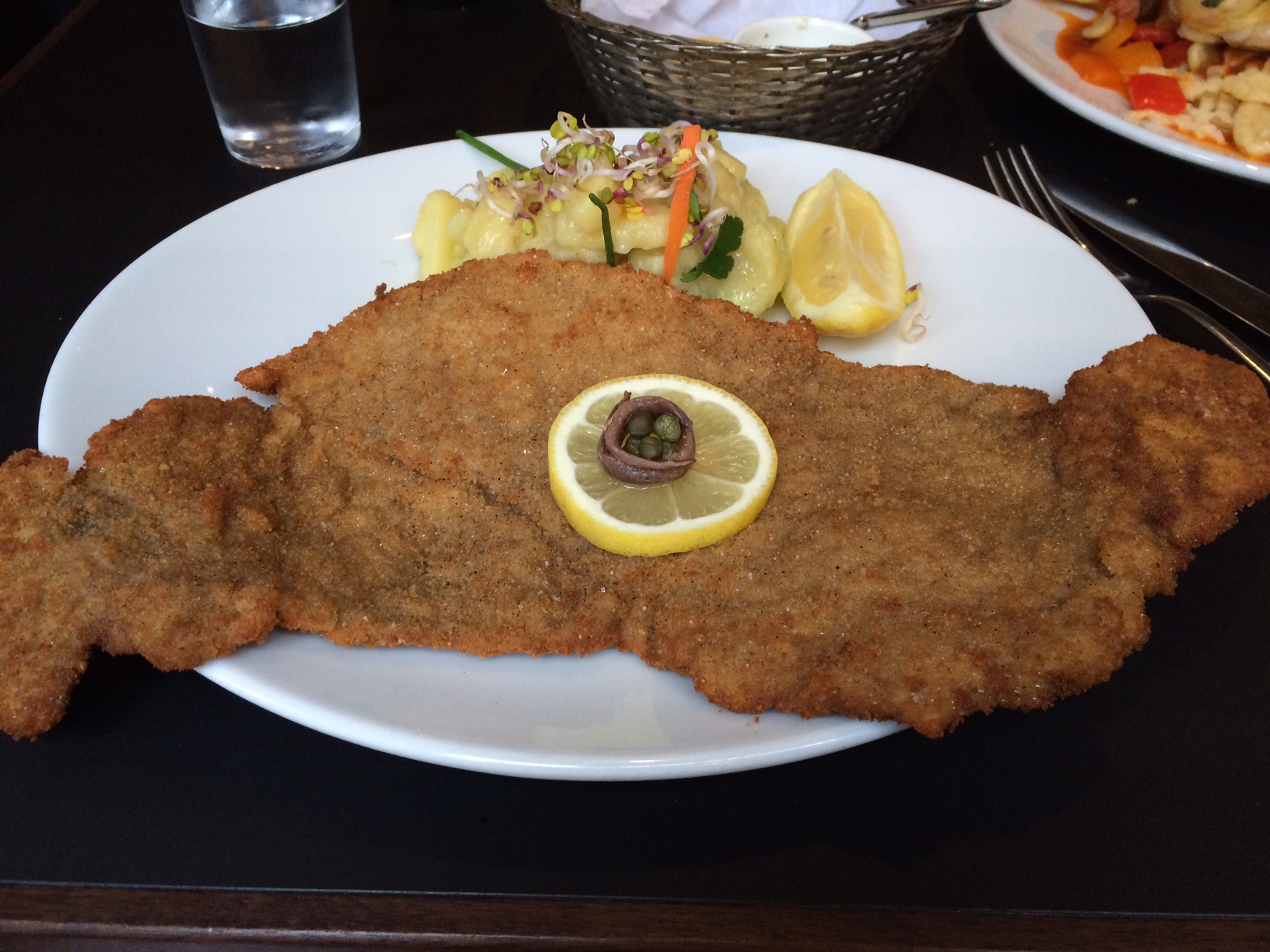 The downside to the city was the huge number of people begging . Many did not look German and some of the begging, although not aggressive as such was certainly beyond what one might want to see when passing by. A large number of Germans were also selling what I presumed to be the equivalent of the Big Issue, in a far more mellow way and indeed interacting nicely with people passing by. The pavements outside shops were littered with evidence of the homeless with their sleeping garments, duvets, sleeping bags and sometimes maybe their entire possessions on public display. 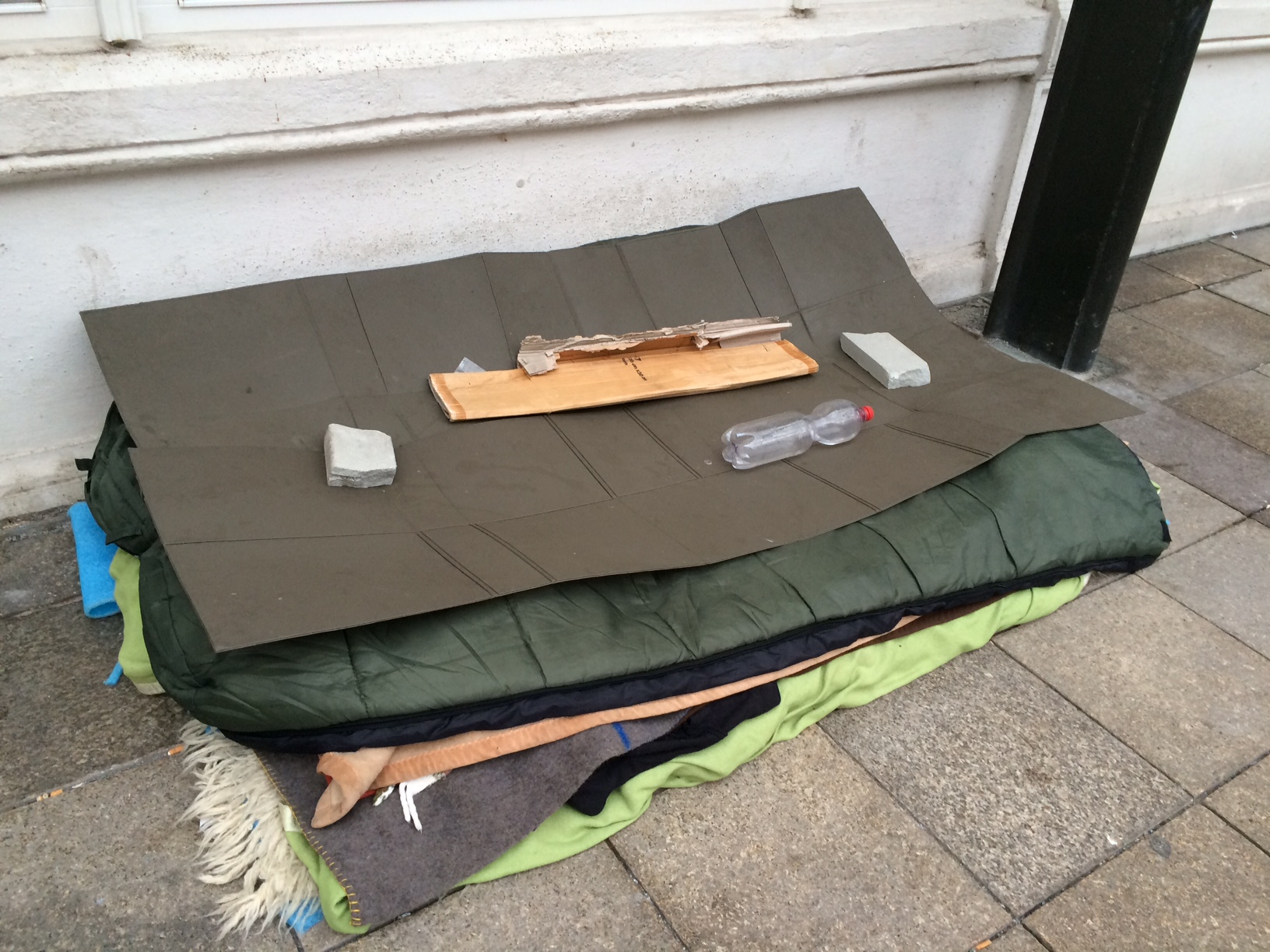 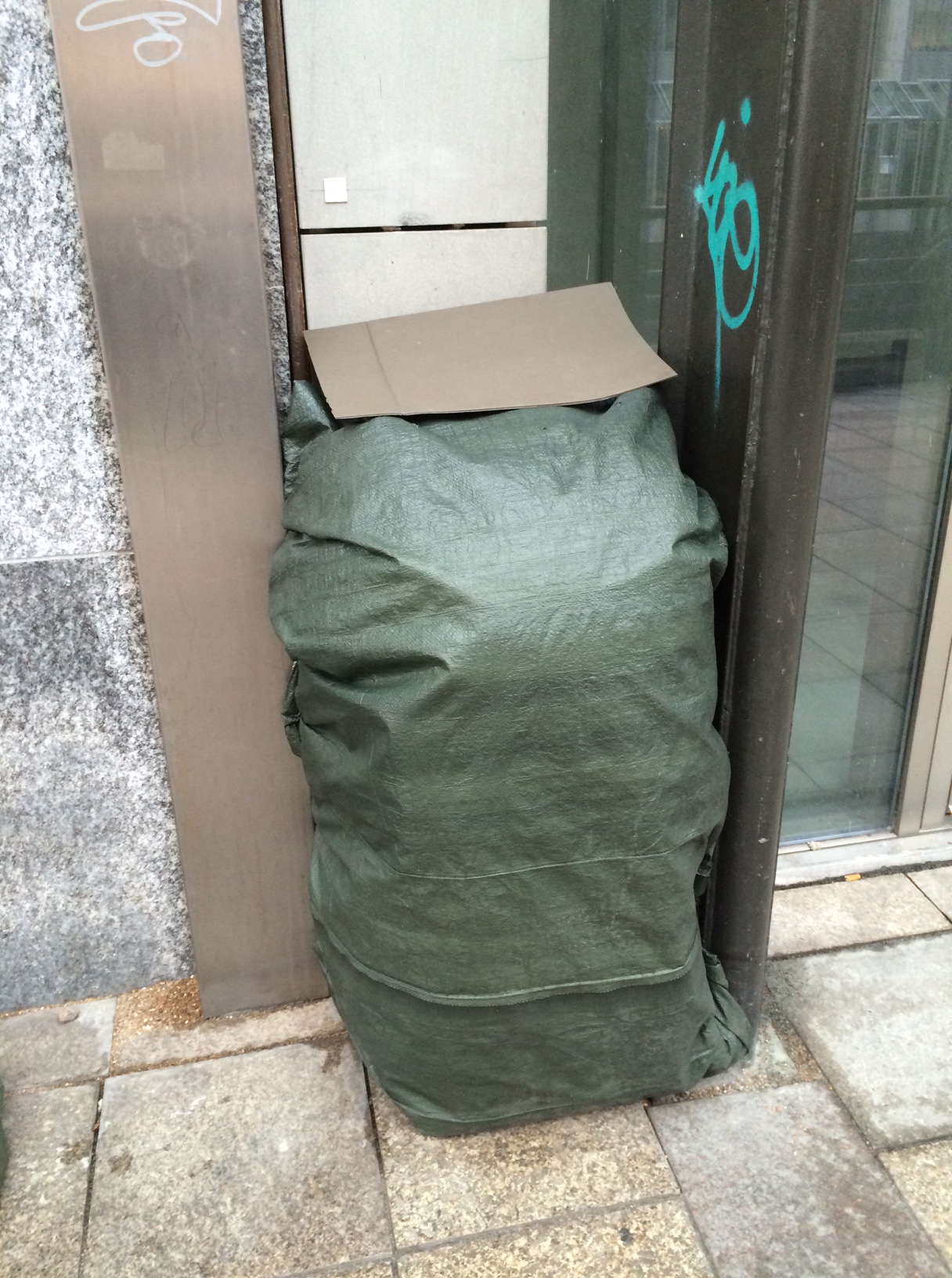 In every European capital and city one sees graffiti which in fact is often so artistic in nature that it is better to refer to it as Graffiti Art. Should this be encouraged? My impressions are that it rarely detracts from where it is painted and often adds something to a grey nondescript wall. Technically though I imagine it is illegal, but why not encourage it in the same way that legal busking works on UK railway stations. 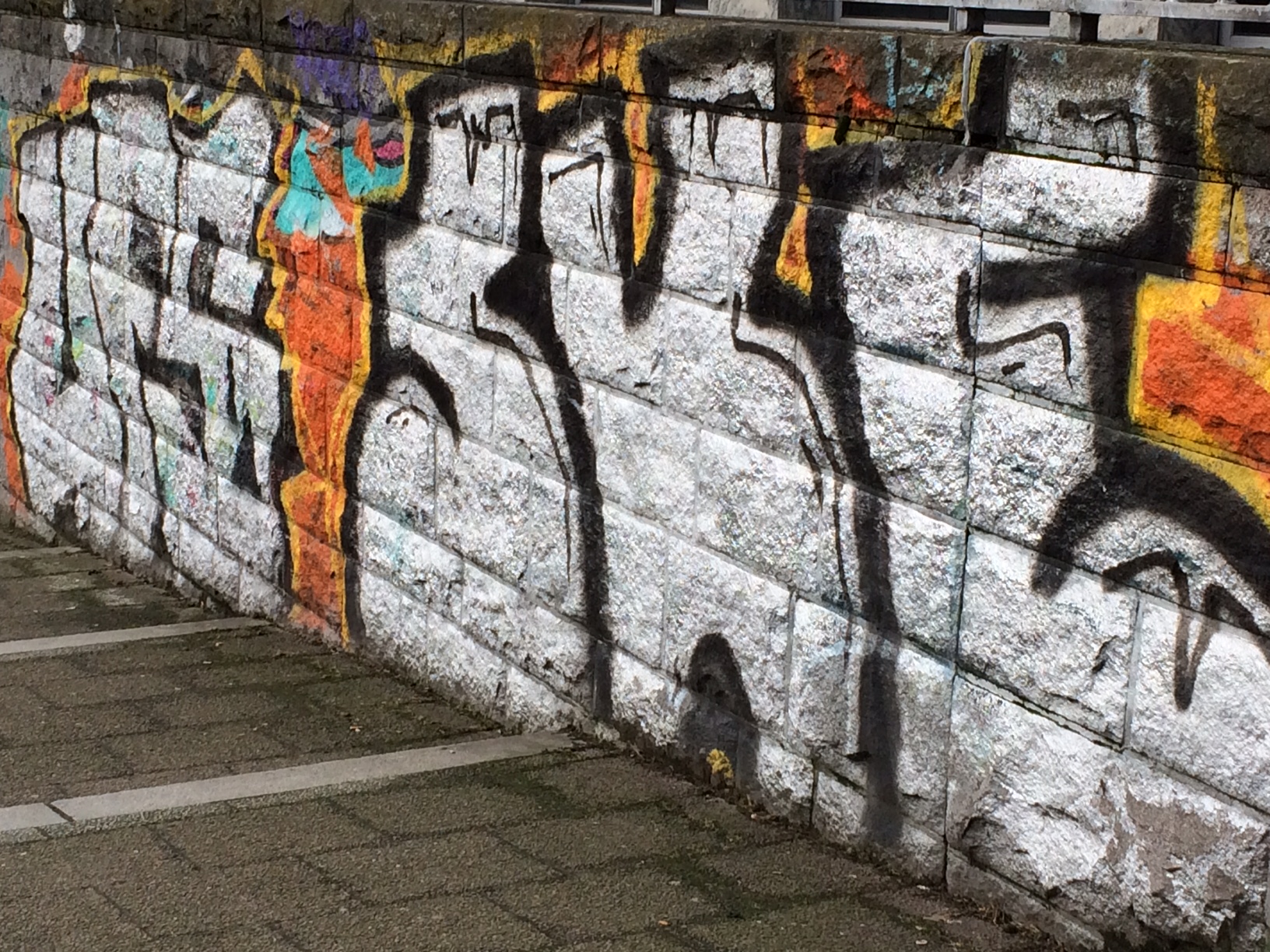 There are a plethora of high quality shops, and although I cannot pretend to be an expert in these types of shops, they kind of stand out as shops that have no-one shopping in them and no price tags on the clothes. Prada was one such example where two young women dressed seemingly in doctor’s white coats, maybe they were doctors from the UK and taking part in the UK doctors strike, were avidly cleaning a clean window outside Prada and at times hoovering the pavement or sidewalk. All the time being watched by a woman dressed in black. The beggars and those sleeping rough did have their “beds” on the pavement outside these shops and to the credit of German society I saw no attempt to move these people on.

Walking around Hamburg is a pleasurable and easy thing and my Fitbit told me that I had easily done my 10,000 steps before early afternoon. The canals are pleasant on the eye, and not unlike Amsterdam in many regards. Travelling around seems simple, with the exception that the Underground runs overground looking like the Docklands Light Railway in the UK.

Everywhere one looked there were interesting things ranging from a sluice in the centre of the city, locks adorning railings and numerous coloured flags. 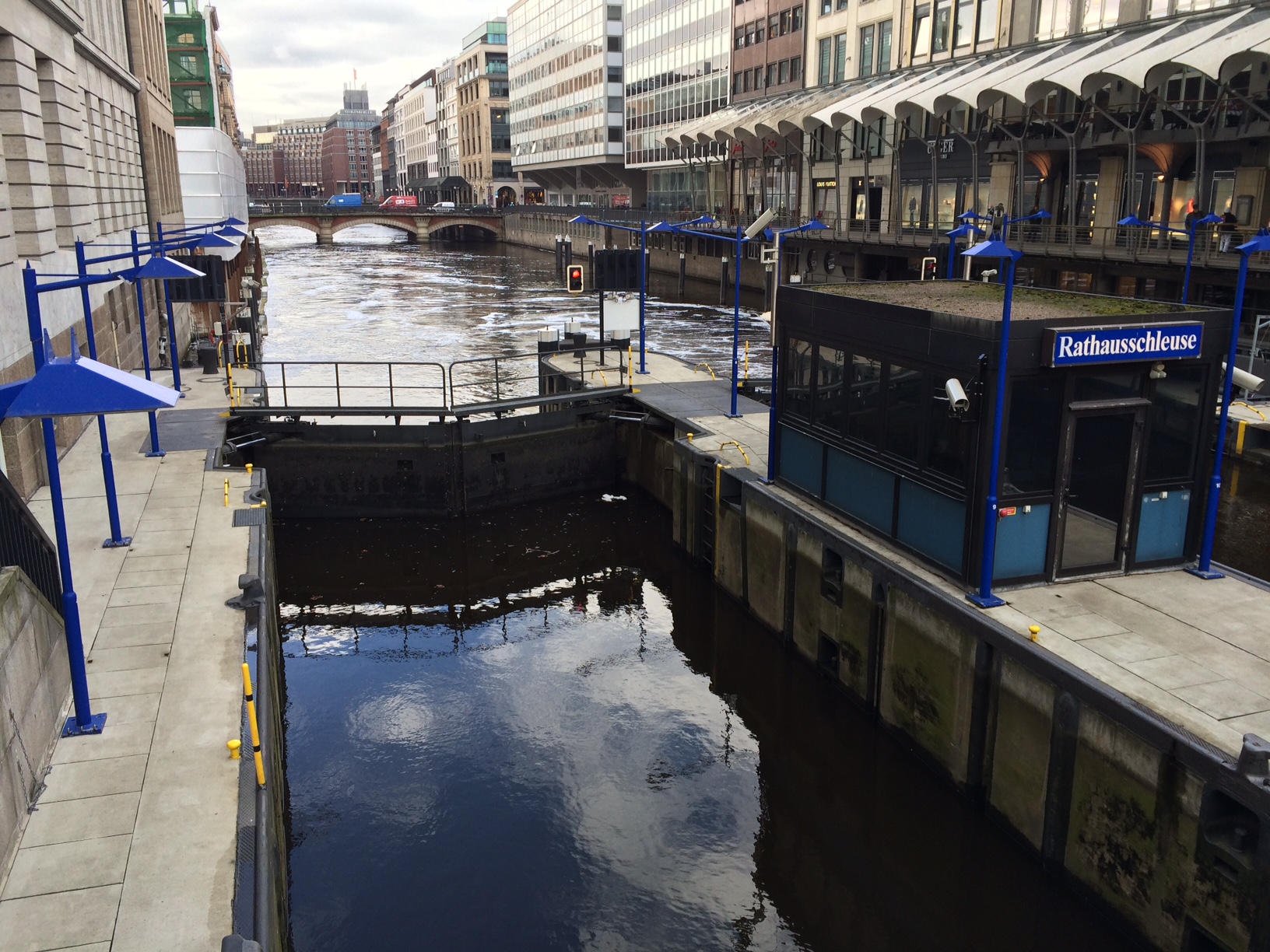 One monument that in fact was a memorial to lives lost through war, looked uncannily like the “monument” in 2001 A Space Odyssey. If anyone remembers that curious start to the film.

The Rathaus and the surrounding area were busy with tourists and a nice walking area, with shops nearby. Hamburg is a city well worth visiting and this view is shared by people far more eminent than myself, Karl Lagerfeld and John Lennon. 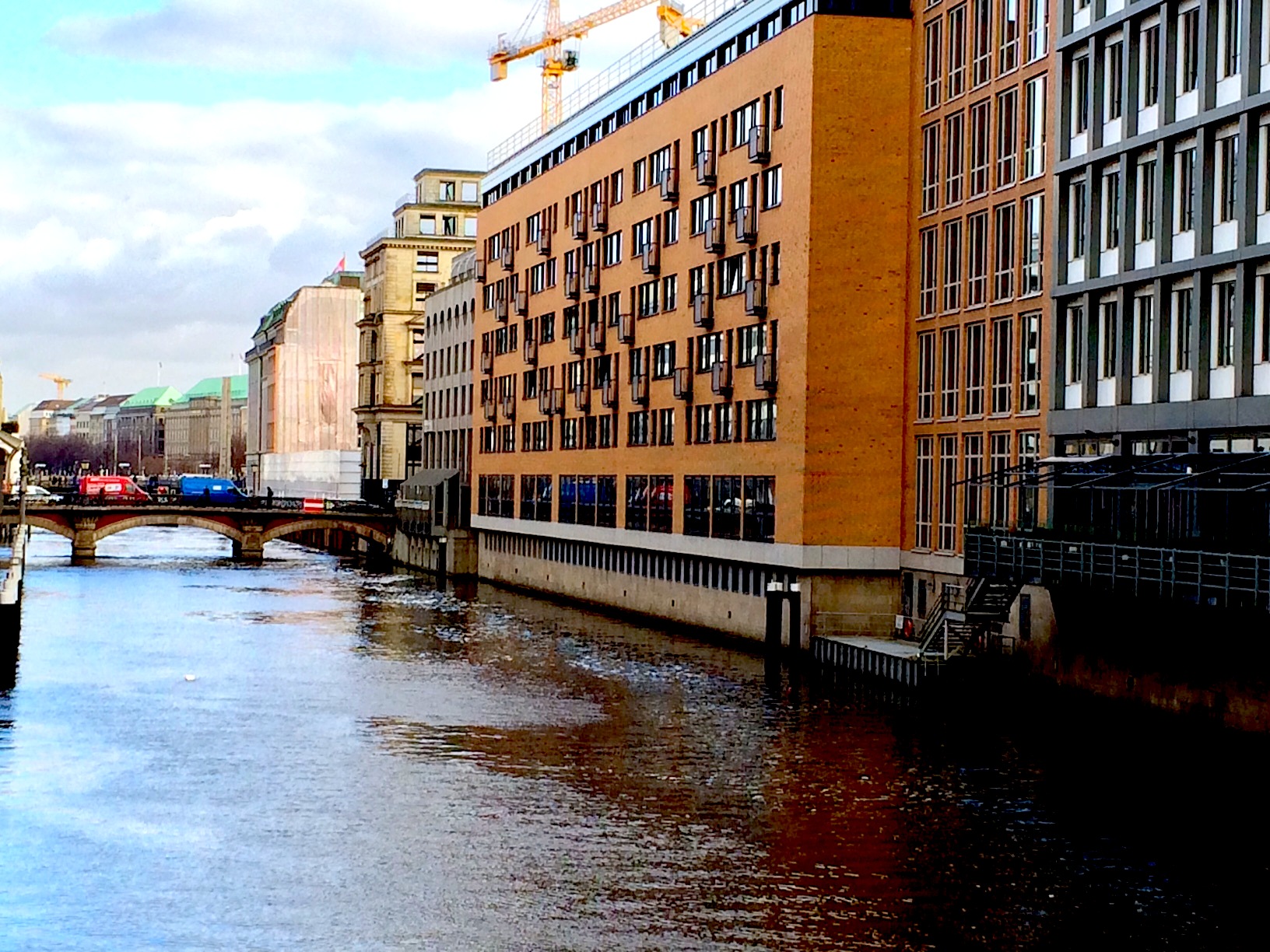 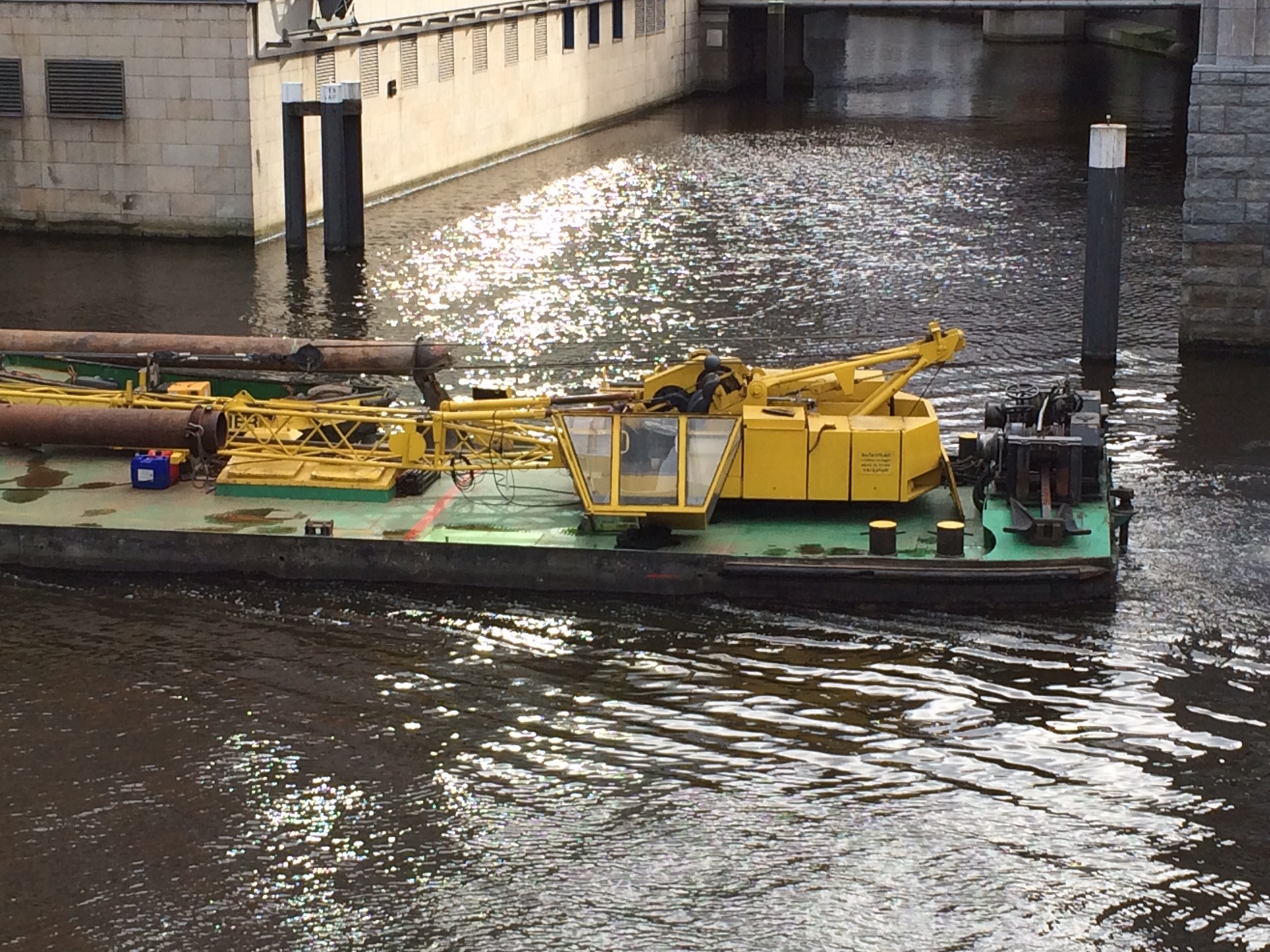 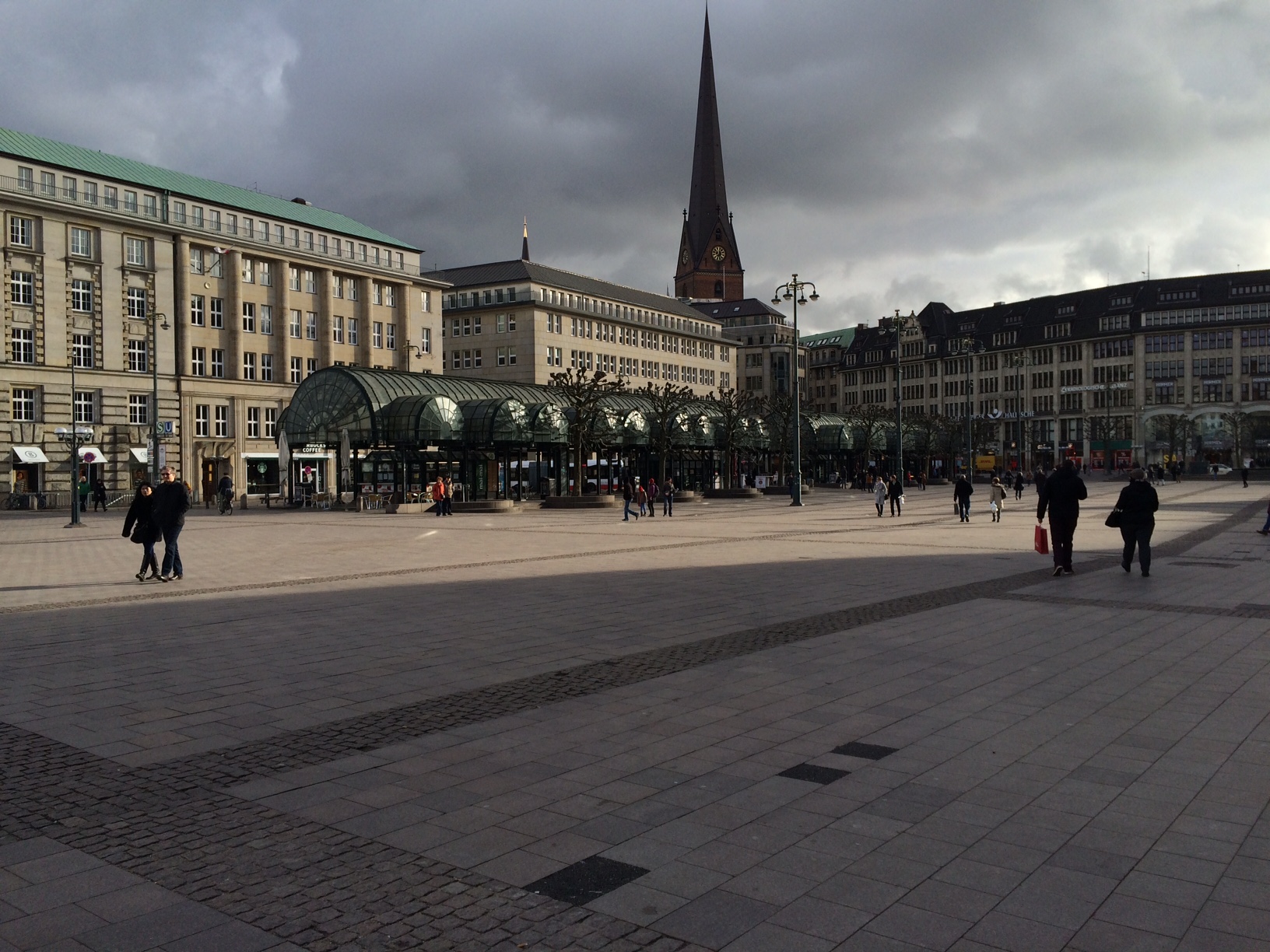 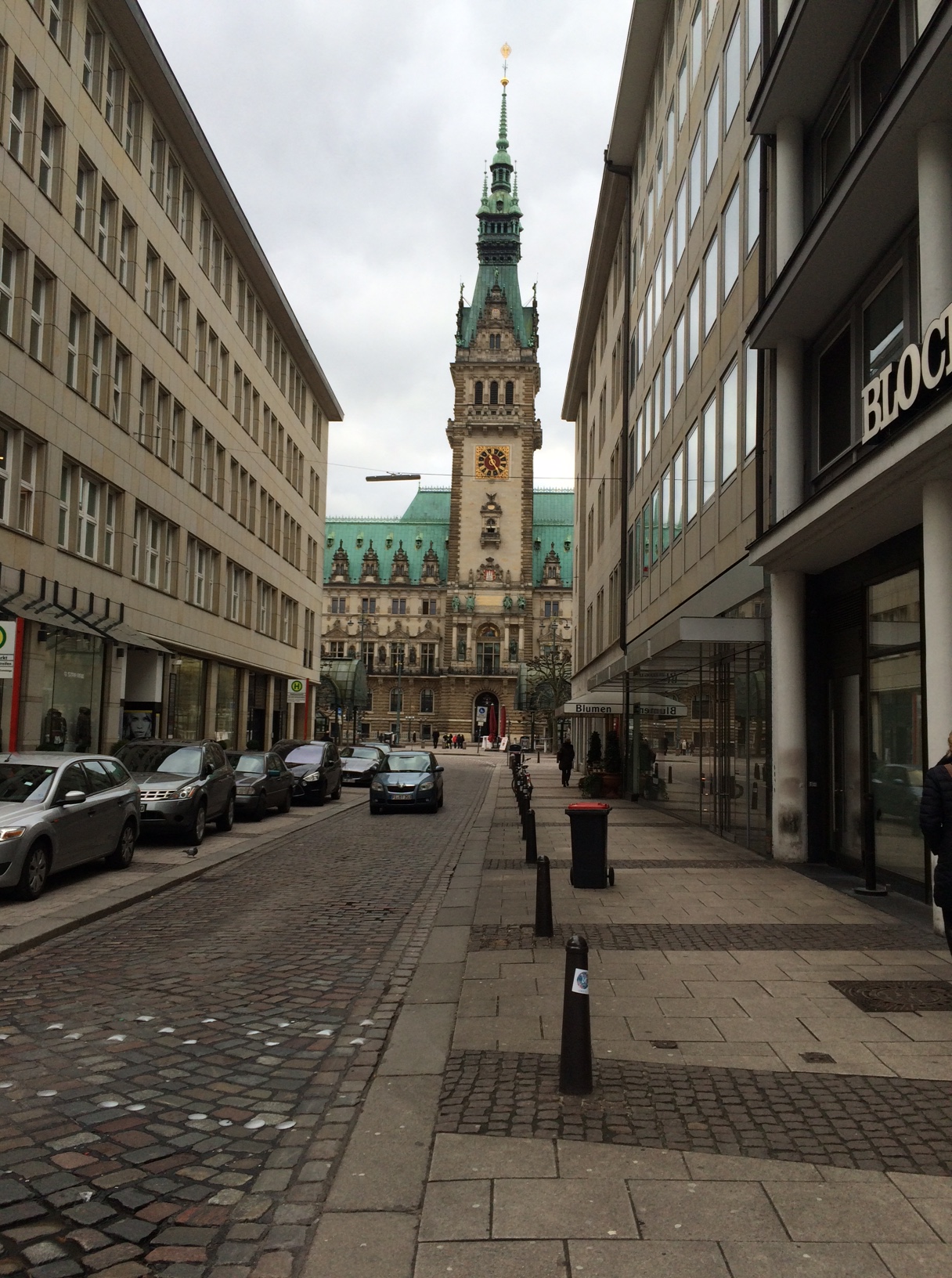 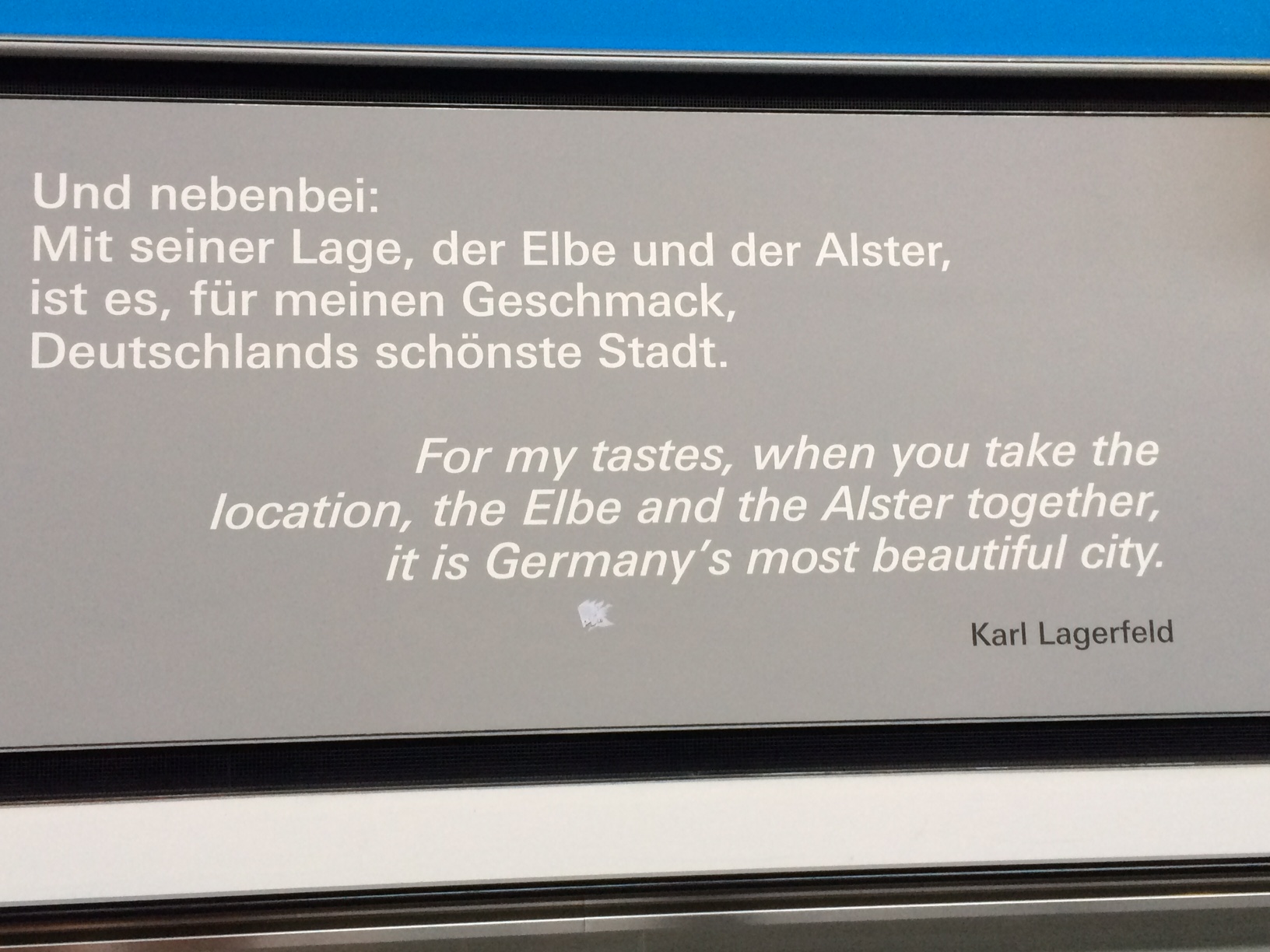 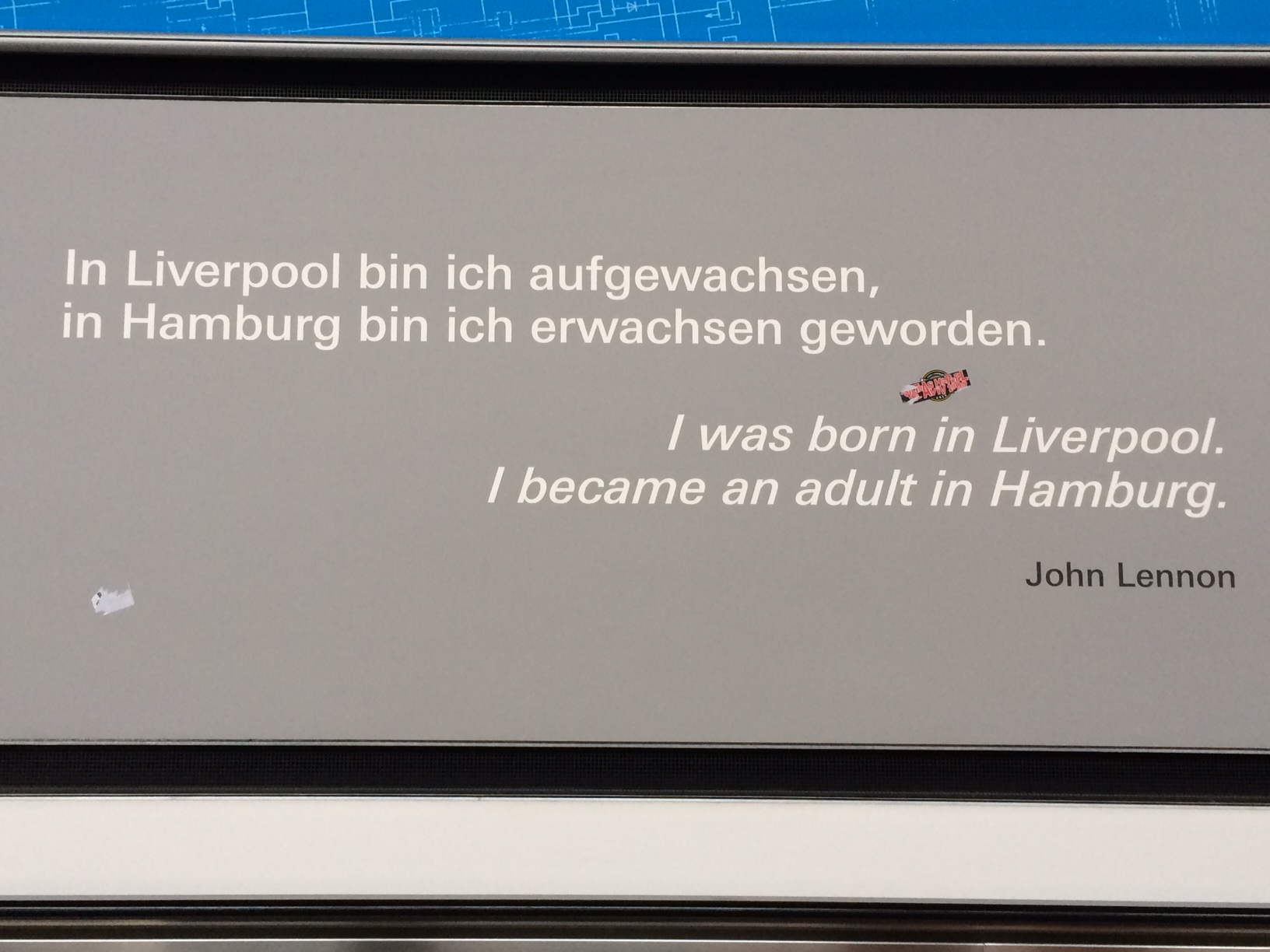 One thought on “Reflections on Hamburg”